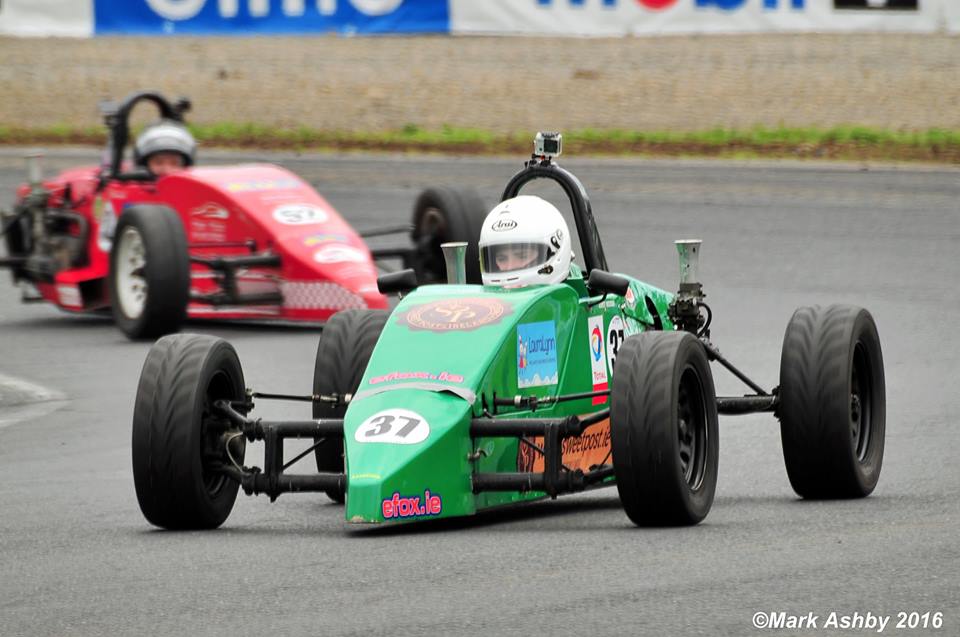 The Formula Vee festival resurfaced this year marking the halfway point of the championship, where has the season gone? It was set to be a particularly busy weekend for the Formula Vee class with two championship rounds taking place on the Saturday. For the first time since the opening round, we were also afforded our B&C championship races before the main A championship race. In total, a qualifying session and four races in one day lay ahead. It was also the first weekend out with my newly revamped Vee thanks to my sponsorship from www.sweetpost.ie

I was well prepared heading into the festival weekend having spent a significant amount of hours on the setup of the car. During testing, I managed to find a second of time on Mondello Park’s national circuit and felt very comfortable. I’ve always been aware that any form of track time whether racing or testing brings different learning experiences but this weekend brought learning new heights.

Quite simply, I’m an idiot for not running an on-board camera every time I have been out on track. I did this all through testing and realised that I was missing track limits all over the place. In a saloon, you’re positioned higher and have the ability to see the limits more clearly, not to mention you can generally feel the track limits as you hop over the kerbs. Not so clear in Vee! I had almost two feet on the exit of some corners and it felt like such a “d’oh” moment with so much extra space wasted.

Back in the arms of Daddy Woods’ SWR racing team I had no choice but to learn about the setup of the Vee and “what does what” if you will. From watching the footage, I was able to see when I was most comfortable driving and what were my quickest times. Learning the mechanics (as in basics) of the car was a massive step forward as I was finally able to provide some real feedback and felt that I knew what I was talking about. You’d think that this should be implied but there’s so much to learn in terms of driving style, this had taken a back seat – big mistake for me.

During Saturday’s championship rounds, I assumed all of these factors combined would have a really positive impact. During the B&C race, we softened the car up to suit the wet conditions – typical Irish style the track was bone dry by the time we set off. I had some decent battles but ended up 13th of 17 which I less than impressed with that performance.

Even so, I was still feeling more comfortable in myself and the car which lead to a mega start careering into the middle of the pack – I had gained 6 places and for once, I was making it stick. A red flag meant a race restart which I knew would be an advantage for me due to the new starting positions. Another fantastic start and I was feeling pretty awesome – which was immediately cut short by a spinning vee trundling towards my front tyres ending my race. It’s one of those things that is really difficult to come to terms with, it’s not your fault so it’s naturally infuriating – but it could be you doing it to someone else the next time out.

Unfortunately, there are these little green plastic blocks mounted on the steering rack that you just can’t live without. Mine were shattered into pieces and the right sized replacements were nowhere to be found in the paddock. The rest of the day was a write-off and we were left in a flurry of panic, working all night to have the car ready for the next day. Heartbreaking stuff!

The Formula Vee festival in aid of the LauraLynn Children’s Hospice consists of 2 heats and a final. The grid for the heat is decided by a raffle and reversed for the second one. The average of the two determined the starting position of the final. I started in 11th in the first which meant 19th in the second within a huge grid of 28. During the first heat I found myself in 5th position during the initial stages of the race before my retirement with a misfire. The second race I also gained significant pace in and had some great battles. I fell back from 10th to 19th again before the race was very prematurely cut short but a red flag with 5 minutes to go. In the final, my own driver error lead to an early retirement but I still came home with a very positive attitude.

Things are coming together. My confidence in my abilities are improving and I’m looking towards some podium finishes before the year is out. You can catch me in Kirkistown on the 27th of August for the next round of the Formula Vee championship. Thanks again to www.sweetpost.ie for their support. Most importantly, significant funding was raised for the LauraLynn Children’s Hospice so well done to all the drivers and spectators for their contributions.