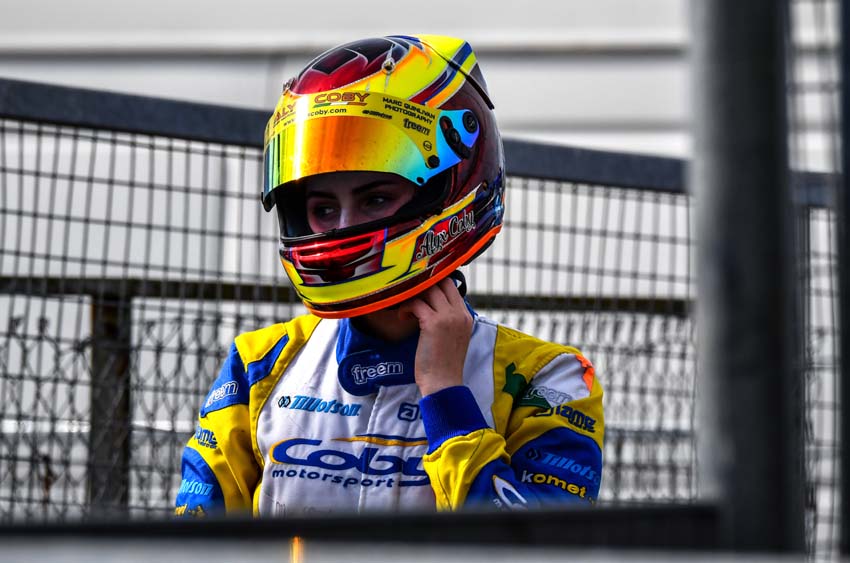 Alyx Coby at Round 8 of the Motorsport Ireland Karting Championship. Photos: Marc Quinlivan

14-year-old Alyx Coby, from Newbridge, Co. Kildare was on the grid last weekend as the Motorsport Ireland Karting Championship headed south to Watergrasshill in Co. Cork for the penultimate round of this year’s Championship.

Competing in the IAME X30 Junior class, for drivers aged 11-16, Alyx got the day off to a good start with a strong performance in the first of the day’s two qualifying heats. Starting in 7th place, she fought her way through the pack to 3rd by the end of lap three and set about catching the leaders with a string of quick laps, setting the fastest lap of the race along the way to finish in 2nd place.

Lining up for the second heat in 4th place, Alyx made it up to 2nd by the time the karts came out of the first corner. With the top three drivers being closely matched for pace, the trio ran together for the entire race. Alyx briefly took the lead towards the end of the race before dropping back to 2nd place as the chequered flag came out.

Those results meant Alyx started the first final in 2nd place. She held onto that position through the first corner and sat on the bumper of the leader as they both pulled out a gap to the chasing karts, before she took the lead with a dive up the inside of the first corner on lap 5. The lead changed several times over the next six laps, but the close battle allowed the chasing karts to close the gap and on lap 11 she dropped back to 4th place before retaking 2nd place on the following lap and then defended her position to the end of the race. She also set a new lap record in this race.

For the day’s second final, Alyx once again started in 2nd place. In what was the tightest race of the season so far, the positions changed almost at every corner of every lap as the top four drivers ran nose to tail for the 20 lap race. Alyx managed to hold on to 2nd place as the top four crossed the line separated by less than a second, securing her 6th podium finish of the season.

The Newbridge teenager has retained her third place position in the Championship as the series travels to Tynagh in Co. Galway for the final race of the season at the end of the month.