Aimee Woods back in Mondello for Leinster Trophy Weekend 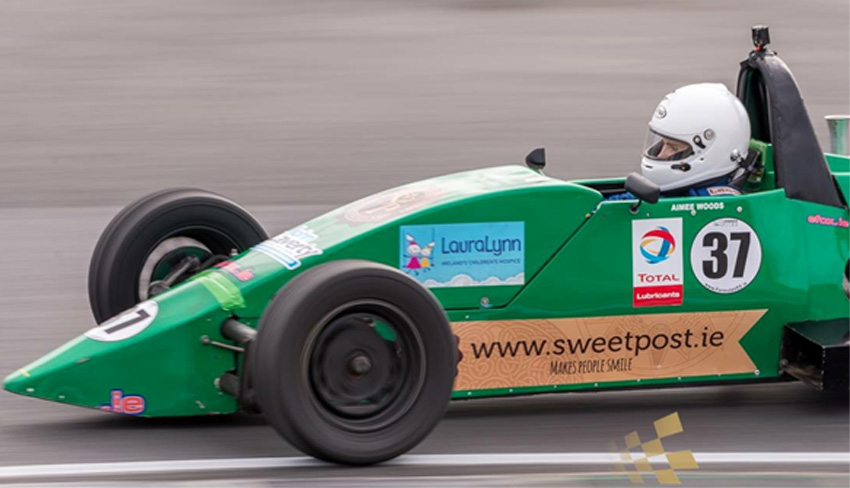 The Leinster Trophy weekend is the most prestigious weekend of the Irish Motorsport calendar in the realm of car racing as well as the wider motorsport community. The elusive trophy, once coveted by racing gods Ayrton Senna and Mika Hakkinen was awarded to the BOSS (Big Open Single Seater) class which enticed a flurry of new spectatorship. Every class is appreciative of new interest and hope to put on their best show of the year which in turn often decides the fate of their respective championships.

Practice on the Friday was pressured and uneasy. The chaos stemmed from the huge numbers entered with very little track time to go around. I found it difficult to achieve a lap that was hadn’t been tarnished by traffic or some form of incident. Even so, with the further refurbishments to my Formula Vee I managed to scrub two seconds from my previous best time last June on the International circuit. I was completely annoyed by this which in turn leaves me feeling very content. I’m delighted to feel frustration because I now realise I am better than this.

Qualifying saw 21 cars taking part in which I qualified 17th for the Vee final. I was understandably agitated by this as there had been 3 red flags during a fifteen minute qualifying session. The Vee drivers were not in the mood to keep in on the black stuff which entirely messed up any strategy I had in mind. I would only be taking part in the B&C race on the day due to family commitments so immediately I was relying on a sprinting start to give me any chance of a decent outcome.

For the B&C race I started 13th on a grid of 17. Following a decent start and first corner chaos I found myself in fifth and holding on to it. I wasn’t entirely satisfied with the handling of the car as I felt oversteer was an issue. Thankfully I’ve learned to manage this and continued defending regardless of a misbehaving car. Another red flag led to a restart from our original grid positions – back to 13th for me. It wouldn’t be a Vee race without a few cars being eliminated in the first lap so there was one advantage! I am grateful that it wasn’t me as I’ve struggled with being taken out of races a few times this year. The race had several close battles for me and eventually I clambered my way up the grid finishing in 7th place overall and 3rd in the C championship – finally a podium! Persistence, hard work and refusing to give up are finally being rewarded. The fire in my belly had been reignited and I had never felt so determined.

SWR (Sean Woods Racing) have been working extensively on developing the car so my Daddy Woods himself took over as the driver in the final. Feedback is something I struggle with so I knew this would have an advantageous outcome for us. His thoughts? The car needs huge adjustments as he found it almost un-drivable.

I feel a great sense of achievement and disappointment this year. I look back at the 2015 Leinster Trophy meeting where I took part in the Vee race as a newcomer and notoriously struggled with everything. I envisaged that by the 2016 Leinster Trophy I would have had much more success and experience. Equally I cannot take for granted the hard work and huge learning it has taken to get to this point. I’m filled with hope and belief that following this weekend, I won’t be spending any more time at the back of the grid. I’m still in with a chance of third place in the C championship following the final round taking place this Saturday the 1st of October in Kirkistown.

With thanks always to Sweetpost.com for their ongoing support