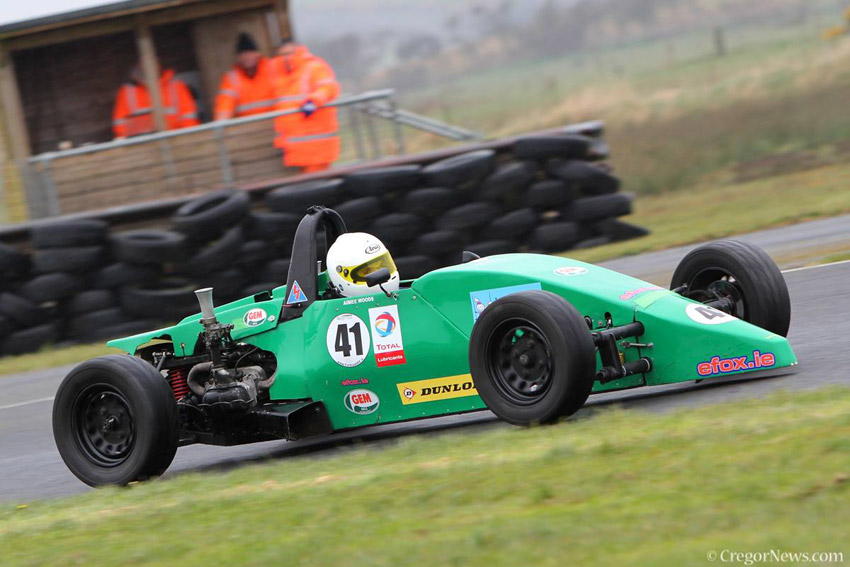 Welcome back to Aimee’s Inside Track……….The 2016 Formula Vee season kicked off in Kirkistown writes Aimee Wood

The 2016 Formula Vee season saw the opening round kick off in Kirkistown located in the North of Ireland – a track I’m not overly familiar with. My last outing in October 2015 had been a practice session in Mondello Park to see out the year on a high note with hopes of continued improvements to the lap times. Towards the end of the day I felt like a real Formula Vee racing driver finally being within 3 seconds of the pace. A high note it was indeed – during the last practice session being thrown about 6 foot in the air at the end of a main straight by a rogue newcomer. Thankfully I had no major injuries and the car pulled through – the joys of motorsport.

Miserable conditions awaited in Kirkistown during the first practice session of 2016. Relentless heavy rainfall coupled hurricane winds are not ideal for single-seat racing. Practice was an essential element of the weekend to test both the cars and my own performance. The odds were against us as a result of damage done to the car and my confidence from October’s smash so I was nervous to say the least. I needn’t have worried – I totalled around 8 laps for the whole day as a result of mechanical issues. I was surprised I didn’t need a set of oars to make it around those 8 laps. For the first time in my Formula Vee career it was the car letting down my performance and not my own abilities. Unexpectedly, it helped me from a psychological viewpoint as when I did get on the track I was more determined than ever to see results. My fear of the wet was also eased as the horrendous weather made the typical Irish rain seem tame.

The conditions were much improved on the Saturday morning and I welcomed a damp qualifying session by comparison.Rather than bowing to negativity I decided to use it as a positive. I was finally feeling excitement about the race, of course in tandem with the usual bout of utter nausea! The conditions again took a turn for the worse and we were preparing for a wet race. Lining up on the grid I was faced with the danger of speeding in to Debtors corner with a bundle of crazy Vee racers battling it out for the lead. Thankfully those thoughts melted away and with a phenomenal start, I climbed five places. Track conditions were tricky and there seemed to be cars spinning off everywhere. Consistency reigned and with the steady pace throughout the race I lay in now sixth. Then it came –  I had my own spin – entirely self-induced by getting a bit cocky but thankfully a quick recovery left me back in seventh. Right as I overtook again, a newcomer to the class, he had his own spin. Not ideal timing for me, I ended up in the bank with minimal damage but was forced to nurse the car around to the chequered flag – not a DNF (did not finish) result but not the desired one, officially I finish in tenth. F**K.

I had a fabulous first race and was positively psyched to have seen myself gaining some real pace. The results were beginning to come together and my determination for the season was at an all time high. The second race had a similar fate – again gaining a lot of pace until it was cut short by another newcomer in lap two hurtling into the side of me in to colonial corner. A disappointing end to the day but with minimal damage to the car, bring on the remainder of the season.

The next round will take place in Bishop’s Court on the 7th and 8th of May which is sure to see a much better result from me. This year is set to be an exciting one and the dreams are alive of being a real competitor for the B championship. Thankfully, we have drop rounds so this weekend is written off as a bad day at the office. Hope you the there. Stay tuned on the blog.