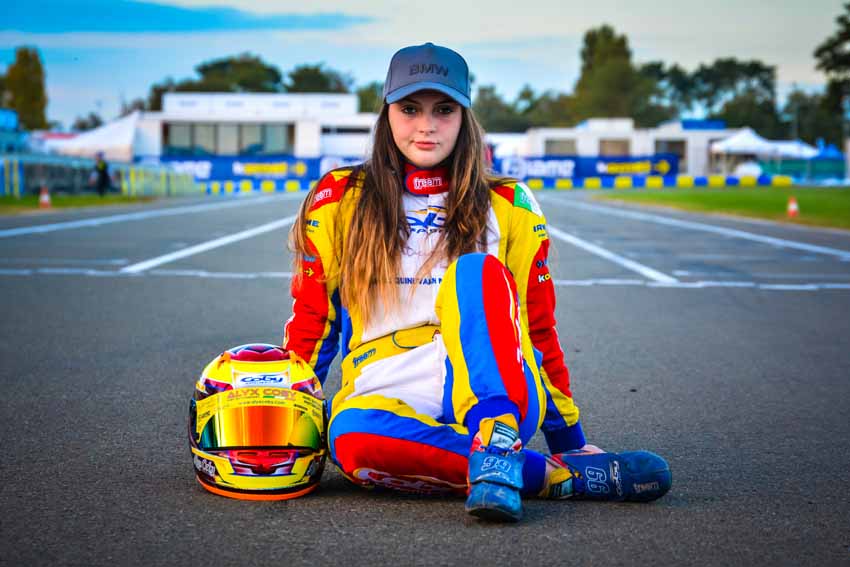 13 year old  Alyx Coby headed off to Le Mans in France at the weekend to compete in the IAME International Finals.

Newbridge kart racer Alyx Coby headed off to Le Mans in France at the beginning of October to compete in the IAME International Finals. She qualified for the event after finishing in third place in this year’s Motorsport Ireland Karting Championship.

The 13-year-old has just completed her fifth season racing, and her most successful one to date, with one victory, twelve podium finishes and setting fastest lap six times – including setting the lap record around the new Mondello Park junior karting circuit.

Alyx started racing karts at the age of eight. Her father, Gary, and uncle Aaron had been racing from before she was born, so some of her earliest memories are of travelling the country with the family’s race team, Coby Motorsport, watching them race. “Even when my mam was pregnant with me she was at the racetrack!”, she jokes. It was therefore inevitable that the youngster would end up racing too. She even races with the same number 99 on her kart that her dad and uncle used during their racing days.

Alyx is racing in the IAME X30 Junior class, which caters for drivers aged 13-15. Powered by a 125cc engine, these karts can reach speeds of up to 130km/h on the 1.3km long Le Mans International Karting track.

She has travelled to the UK to race several times, but this was her first major international competition. At the French circuit she was joined in her class by 133 of the best drivers in the world – from Europe, the USA and as far afield as Hong Kong, Singapore, Peru and Argentina – and an overall entry of over 450 drivers in all classes, including 16 other Irish drivers.

After visiting the circuit two years ago when her uncle Aaron competed at the event, Alyx was already familiar with the layout of the track, but Sunday morning was her first opportunity to drive it herself.

Speaking about the experience, the Newbridge schoolgirl said “I always get excited in the days before a race and a bit nervous too. Coming to a big event like this was a bit daunting at first, but now I’m here and in the kart, it’s just like any other race. It’s a fast track with lots of technical sections so I need to focus on learning the circuit over the next few days and doing my best when racing begins. Eight days in the kart is going to be tough, but I’m ready for the challenge and can’t wait for racing to start on Wednesday. I’ve been looking forward to this for so long, so it’s great to finally be here.”

The length of the event would be one of the toughest elements for Alyx – spread over 8 days it was be the longest period she had spent in a kart. She had been building up her strength and fitness over the last 18 months with Newbridge Kenpo Karate Academy where she trains 5 times a week. She earned her brown belt just last month and also attended the International Karate Championships in Portugal earlier this year, coming home with two gold medals and a bronze.

After four days of testing, Alyx took part in her first ever timed qualifying session on Wednesday evening. This was a new experience for her as grid positions at home are decided by a random draw and then reversed for the second heat. In France Alyx would have a single ten-minute session to set her fastest time and this would determine her starting position for all 7 heats over the next three days.

With the qualifying session taking place at night under the floodlights, the track conditions had changed and what had been working well in the October sunshine didn’t quite work for her and she would, therefore, start all her heats from the 17th row of the grid.

Used to racing on grids of 10 karts in Ireland, lining up to race 34 drivers where, even if you are as fast as the karts around you, you can lose six or seven places in a single corner was also going to put the teenager to the test.

Alyx took part in her first two heats on Thursday. A 10 second time penalty in the first heat for a dropped nose-cone saw her demoted to the back of the field. In the second heat she put in what was probably her best performance of the week, passing 14 karts in the 7-lap race to finish in 20th place. In this race she set the 5th fastest lap time and was fastest of all through the final sector of the track.

Friday saw Alyx contest three more heats. Starting all of them from 34th place she battled through to finish in 24th, 21st and 24th places respectively. In Saturday’s penultimate heat, Alyx was disqualified for a technical infringement and completed the last of her seven heats in 23rd position.

A combination of the low starting position in each heat, the time penalty and disqualification meant the Newbridge girl failed to qualify for Sunday’s finals, but with an improvement in pace over the week there were still plenty of positives to take away from the experience.

She was upbeat about her performance at the event, saying “I had a fantastic week. As the days went by I gained extra confidence running in large groups. I made some nice overtakes in the heats and when I found some clean air I was able to put in fast times. Unfortunately, I didn’t qualify far enough forward, and as the races were only 7 laps long, by the time I had worked my way up about 10 places the race was almost over so I’ve learned the importance of setting a good time in qualifying. Timed qualifying was a new experience for me and I’ll need to work on that for next year, if I’m lucky enough to come back.”

Alyx’s next race at home will be Tullyallen Karting Club’s annual T Plate meeting just after Christmas and then a three-month gap before the Motorsport Ireland Karting Championship gets under way in March of next year.

Having recently started in first year at Gael-Choláiste Chill Dara, Alyx was asked what they made of her extra-curricular activities at her new school. She replied “My principal told me she has been reading about me in the paper all year, so at least when I said I was going to France for a week she knew I wasn’t going to Disneyland! A lot of the teachers and students came up to wish me luck before I left too.”