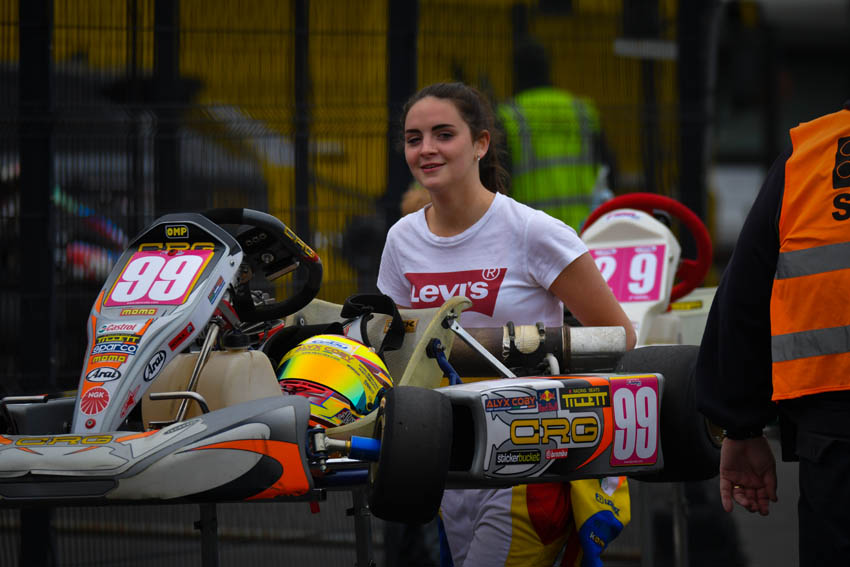 14 year old Alyx Coby continues to impress on the track

Alyx Coby’s race to the top is gaining even more speed where last weekend the 14 year old claimed the top spot at the British Open in Nutts Corner Circuit in Co. Antrim where she took part in the F100UK British Open competing for their O Plate title.

The F100UK British Championship features karts from what many refer to as the “golden age of karting” – the late 80s and 90s. It was an era of lightweight 100cc air-cooled karts screaming at up to 20,000RPM with no electronics or radiator unlike the modern IAME X30 kart Alyx has been driving for the last two years.

Racing in the JICA class, aimed at drivers aged 13-16, the Newbridge schoolgirl was racing a kart similar to the one her father Gary drove when he was her age. This was the first time the F100UK series hosted a race in this class, with the aim to encourage more young drivers to enter the historic racing series.

Friday morning at Nutts Corner was the first opportunity Alyx had to sit in the 1998 CRG Charlotte kart she would use for the event. Despite never driving a kart with the 100cc Vortex engine before, by her second run she was setting times as fast as many of the drivers in the senior class and got quicker with each run. By the end of the day she was the quickest driver in the JICA class.

Saturday’s planned practice session was interrupted for almost 5 hours by a torrential rain shower that left parts of the track under water. This meant Alyx had only a five-minute session on track to familiarise herself with the conditions ahead of the qualifying shootout to determine the starting positions for Sunday’s first heat. With drivers getting just two flying laps to set their fastest time she set an almost identical time on both laps – just two hundredths of a second apart – to secure pole position by almost three and a half seconds in the damp conditions.

Starting the first of Sunday’s two heats from pole position Alyx held her position through the first corner and, with the track still greasy following the heavy rain the day before, she managed to extend her lead by as much as 5 seconds a lap over the 12 lap race as she was able to get more grip out of the fresh tyres and took the flag with a margin of almost a minute.

With the grid reversed for the second heat, Alyx started from the back of the pack. She made it up to 3rd on the run into the first corner but spun while trying to avoid the lead two karts which had spun in front of her. She made it back on track but had lost almost 10 seconds to the leader in the spin. By the end of lap 2 she made it onto his rear bumper and took the lead on the way into turn 2 and then opened up a gap to take her second victory of the day.

Following the two heats, Alyx lined up on pole position for the pre-final. A technical issue with the kart caused her kart to cut out at the start and with the kart not having an electronic starter like she was unable to restart it. A red flag for an incident on the second lap allowed her to join the back of the grid for the restart and she finished the shortened race in 3rd position.

This left the teenager in third place on the grid for the final where she took the lead by the end of the first lap and pulled away while the chasing drivers got stuck in their own battle for a couple of laps, eventually taking the chequered flag with a comfortable lead to become the first ever winner of the F100UK British O Plate.

After a long weekend of racing there’s no time for Alyx to relax as she’ll be back in her regular kart this weekend for Round 6 the Motorsport Ireland Karting Championship where she’ll be aiming to improve on her third place position in the series.