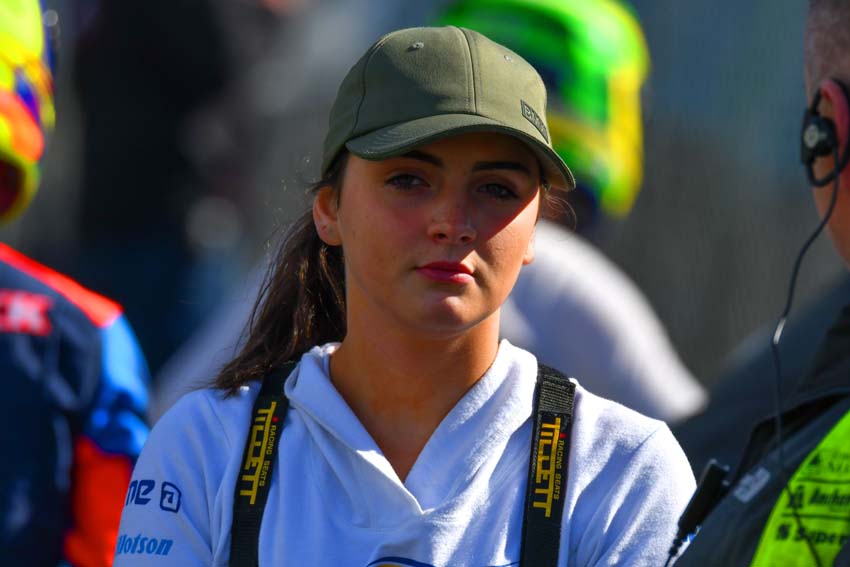 Alyx Coby at the final round of the Motorsport Ireland Karting Championship. Photos: Marc Quinlivan

14-year-old Alyx Coby, from Newbridge, Co. Kildare, took to the track last weekend as the Motorsport Ireland Karting Championship drew to a close

Alyx began the first of the day’s two qualifying heats in 8th place. A nudge from behind at the first corner left her facing in the wrong direction and last but by the end of the second lap she had caught up to the back of the pack. She made up four positions on the following lap to return to 8th place and then gained one place per lap to finish 4th.

Starting the second heat in 4th position, Alyx got off to a great start and took the lead through the first corner. She
defended her position for the first five laps before dropping back to 2nd with three laps to go. A post-race time
penalty for the race winner then promoted her to 1st place.

This left Alyx in second place on the grid for the first final. After running wide on the way out of the first corner on a damp track, she found herself back in 4th place and dropped one more place on the following lap, finishing the race in 5th place.

Starting the second final in 4th place, Alyx climbed to 3rd position by the end of the second lap and was up to 2nd
place a lap later. Stuck in a three-way battle for the lead she managed to fend off the chasing kart before making a
pass into the last corner to take the lead with three laps to go and defended her position over the remaining laps,
taking victory by a margin of just eight-hundredths of a second.

This result, combined with her strong performance at the circuit earlier in the year, meant Alyx won the Galway
based Southern Karting Club Championship in addition to securing third place in the Motorsport Ireland Karting
Championship. It has been a successful year for Alyx with 4 race wins, 7 visits to the podium and setting the fastest lap on six occasions. The Newbridge teenager has also qualified for the IAME International Final at Le Mans in France to compete against 130 of the best drivers in the world from October 8th to 14th.