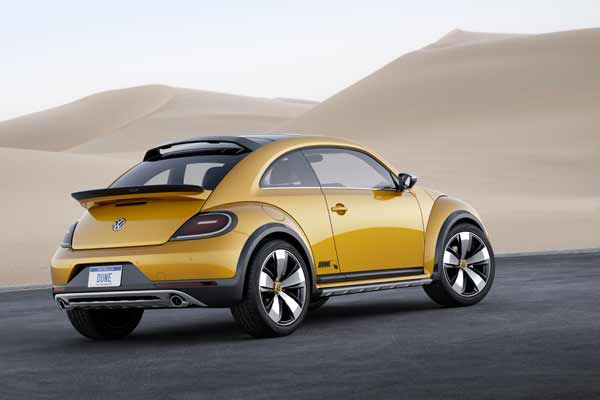 We look at a  family of  Bugs. But which is your favourite?

At the Detroit Motor Show Volkswagen this week unveiled the Beetle Dune concept, pointing in the direction of a future crossover version of the iconic car. “Rugged Bug” joins an exclusive club of Beetles that have been given an exciting makeover.

The latest Beetle Cabriolet has all the retro charm of the coupé version, with the added bonus of a fabric roof that can be let down automatically for open-top driving fun. The folded roof sits above and behind the rear seats giving the Beetle Cabriolet the look of an old fashioned pram when the roof is let down. Still it’s a difficult car to dislike.

At the Detroit Auto Show in 2012, Volkswagen unveiled an electric version of  the Beetle, the E-Bugster concept. Along with a great name, the two-seat E-Bugster had an 85kW electric motor propelling the car to 100kmh from a standstill in 10.9 seconds, and with a range of 110 miles. The E-Bugster was the same length as the standard Beetle but wider and with a lower roofline to give it a sportier look.

In the spirit of the original 1970s Beetle GSR, in 2013 Volkswagen released a limited edition model based on the latest reincarnation of the Beetle. GSR stands for Gelb-Schwarze Renner in German, or ‘Gold-Black Racer’. Like the original version, the Beetle GSR is finished in yellow with a black bonnet and bootlid, with black and yellow stripes running down the bonnet. The GSR is a proper racer sitting on 19” wheels and with a 2.0-litre turbocharged 210bhp engine under the bonnet.

In 2001, Volkswagen put a 3.2 litre V6 engine in a Beetle. With 221bhp, a body kit and an absolutely massive rear wing, the Beetle RSi was a little bit bonkers. Then in 2011, the Beetle R based on the latest model debuted as a concept indicating that a new four wheel drive Beetle with a similar power output to the 300bhp Golf R could be in the pipeline.

Volkswagen really wanted to shake off the chick car image with the latest  Beetle. A more toned and sporty appearance, that was more retro cool than retro cute helped, along with some special editions like the GSR and the Fender edition.  The Volkswagen Beetle Fender comes in black, with special 18-inch alloy wheels, a Fender badge on each front wing and inside the dash is finished in ‘Sunburst’ wood (just like a Fender guitar apparently). There is also a Fender sound system, with boot-mounted subwoofer and illuminated front speaker mountings. Rock’n’roll!