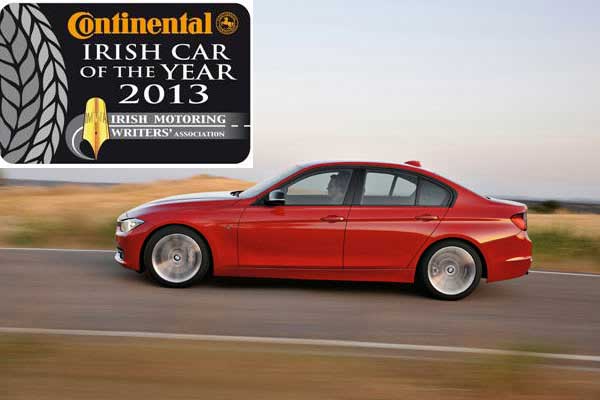 The BMW 3 series has been voted Continental Irish Car of the Year 2013 by the Irish Motoring Writers’ Association. The announcement was made at an awards ceremony today in the Convention Centre Dublin attended by leading figures from the motor industry. It marks the first time that BMW has taken the title.

The results were as follows:

The Irish Motoring Writers Association judges awarded points on the basis of criteria ranging from innovation and safety to space, comfort, build quality, driving quality and value for money.

Presenting the award to Michael Nugent, Director of Sales and Marketing, BMW Group Ireland, Paddy Murphy of sponsor, Continental Tyres Ireland, commented: “The BMW 3 Series is a fitting winner of this prestigious award given its renowned efficiency and technological strengths. For some time this series has been a favourite among the business and broader driving public, and the recognition of excellence from the Irish Motoring Writers today will only enhance this standing.”

Awards were made in five categories:

The Continental Irish Van of the Year 2013 title was awarded to the Ford Transit Custom.

The Irish Motoring Writers’ Association has organised the Irish Car of the Year Awards each
year for the past 36 years.