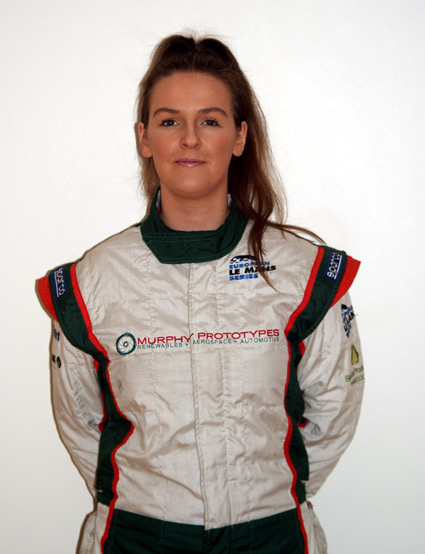 What inspired you to pursue a career in motorsport? My father rallied and raced for years and I was his biggest fan. Even as a young girl, my dream was to become a professional race driver!

What was your first memory of motorsport racing? Dad coming home with a new rally car and discovering that it was not eligible for the events he wanted to enter- so we brought it out testing anyway! When he was actually competing in a rally, my “job” was to wash the car when it came back to service during the event- a task I took very seriously!

Did you face any difficulties getting into the sport and if so how did you overcome them? Motor racing is an expensive sport and initially I had to save for a long time to buy my first car. In recent times, I have been lucky enough to enjoy commercial backing which takes the pressure off and allows me to concentrate on my driving. In 2016 for example, Gem Oils, IT Monkey and Stapleton’s Bakery all backed my ITCC campaign.

Who is your favourite driver of all time? It would have to be Ayrton Senna.

Have you ever found being a woman in motorsport to be an issue? Well there are not too many of us competing and any issues that might arise can be balanced against the promotional gains and subsequent commercial backing.

What advice would you give an aspiring female driver? That’s easy- go for it! Get good management and push for backing as soon as possible.

What was it like becoming the first women to be nominated for the Motorsport Ireland/Irish Sports Council Young Year Award? It was incredible- and completely unexpected. On reflection, it made me take the sport a lot more seriously. It is great that Motorsport Ireland and Sport Ireland recognise the best young drivers in the country and give them backing- both financial and in terms of personal fitness etc

Who has been your biggest inspiration throughout your career so far? Probably my manager Leo Nulty. He has helped me with driver training and managed all of my commercial deals and PR.

Whom do you most admire in your industry? Susie Wolff the former Formula One test driver for Williams.

What has been your biggest achievement to date? My first Irish Tour Car Championship win was great but in my first Global GT race in the UK in June, I qualified second overall on a track I had never raced on so I was really pleased with that.

Do you have a personal philosophy? I do-  “If at first you don’t succeed, try, try and try again.”

What is your ultimate dream for your motorsport career? I would love to be an LMP2 driver and race in the European Le Mans Series and ultimately complete at the world famous Le Mans 24 Hour Race!

What do you love about racing? The speed, the skill required, the competitive element and of course the adrenaline rush.

What car do you currently drive on track? I raced a 250bhp Honda Integra in 2016 but also made my Global GT Lights debut and will more than likely race them again in 2017.

Is there a historic or modern racing car you’d really like to drive? I would love to try a Jordan F1 car, either the original 191 or one of the later B&H cars- or maybe an LMP2  (Le Mans Prototype) Oreca

What cars would be parked in your euro millions garage? Sebastian Loeb’s WRC Citroen C4, a Jordan F1 car and a Porsche 911 GT3 RS.

What is your favourite racing venue and why? Going to Le Castellet in France to test a GT3 Porsche was amazing, but my favourite would have to be Anglesey Circuit in North Wales- it is a proper drivers circuit with a mixture of fast corners and slower technical sections too.

What can we look forward to in 2017 from Nicole Drought? The plan is to get as much “seat time” as possible before a switch to sportscars. We are currently working on a winter testing programme and will also be doing some simulator work with Murphy Prototypes. I will also be testing MiJet sportscars in France before the start of the season.

We know how talented you are on four wheels, what other talents do you have that we don’t know about? I captained a Camogie Team to an all Ireland title and have also won various musical awards before I took up motor racing!

Describe yourself in one word? Driven.