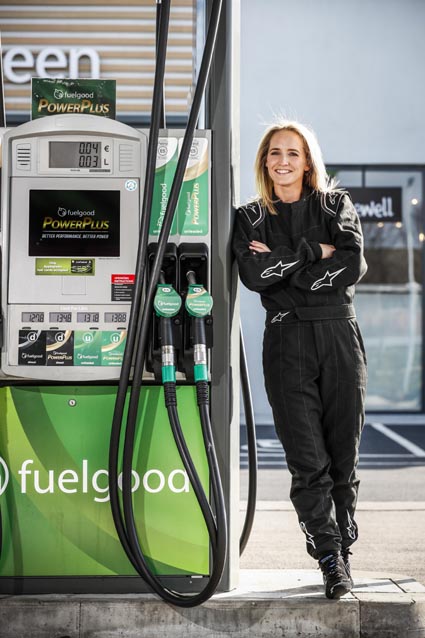 Your current car?
I currently drive a Mercedes C180 Kompressor.

Does it have any extras?
Yes, Alloy wheels, low profile tyres.

Is a car important to you?
Yes extremely. Having a car is important to me as I live on the foothills of the Dublin mountains and the bus service has a love hate relationship with us, you know the usual, two come along at once! I also need to be able to get around the country for different hockey matches and get to Mondello Park quite frequently.  The condition of my car and the engine is very important too.

What sort of state is your car in (inside or out)?
It has aged well shall we say. It’s a 2005 but still looks shiny. There are some cosmetic scratches, but overall it’s clean and tidy.

What’s in the boot and the glove compartment?
A selection of umbrellas and trainers and the glove box has a few cd’s, nothing too exciting, oh and my driving licence of course!

How would you describe your driving, then?
Controlled when on the roads and I’m competitive on the track!

Any bad habits?
Bad driving habits? Well, I like to rest my elbow on the window while I hold the steering wheel, not sure if it’s a bad habit, but it is a habit.

Ever crashed, got a parking ticket or points?
I had a few penalty points for driving over the speed limit once, nothing excessive just a couple of Km over the limit, but I learnt my lesson and I’ve had a clean licence since, I’m careful to observe the correct speed limits.

Have you ever experienced road rage (either passively or actively)?
Oh yes I have! Usually just passively. Mostly when people are not even going the speed limit, or if the traffic is very heavy.

Do other people think you’re a good driver?
I hope so, but I think the most important thing is they trust me

What was your first car?
A Mitsubishi colt 1998 red, I called it my little jam jar.

Who taught you to drive?
My dad when I was very young, he used to bring me and my brother to the local graveyard carpark to teach us how to find the bite.

Any driving test tales?
No, I can’t say I do. I passed the practical test first time but the theory took me more than a couple of tries. I like to say that’s because I am a visual learner.

Do you have a favourite car gadget?
If you can call sport mode a gadget, I think that would be it. Otherwise I do like cars that have more than one cup holder!

What music do you listen to on the road?
I suppose it depends on the length of the journey. If it’s a long journey I tend to listen to soft rock. The likes of Elton John, Fleetwood Mac, Dr.Hook and Rod Stewart etc.

Dream drive in a dream location?
I would actually love to buy my Dad’s old Formula Opel racing car and drive it endlessly around Mondello Park. It was the last racing car he ever drove. It was iconic around Mondello Park and is special to me because some of my fondest memories are of him driving that car. I got to see him win the Leinster trophy and the Opel Lotus Championship in 1999. I also saw him drive it up Stormont Hill in Belfast alongside my Uncle in his Williams F1 car. In 2000 he was diagnosed with Cancer and missed the 2000 season. It was the last car he ever raced in 2001 before he passed away from Cancer in 2002. There are pictures of that car all over our house.

Who would be your dream passenger?
My dad! So I could show him I was just like him and he could teach me how to race like he did on the track.

Passenger, you’d least like?
My mother! She is the WORST passenger.  She tends to panic you with loud yelps if you don’t hit the brake pedal when she would!