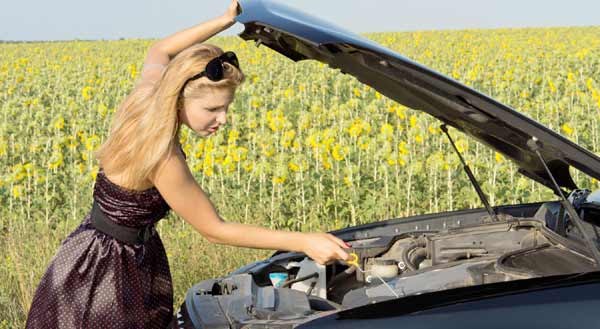 Your engine is an intricate machine with hundreds of moving parts and engine oil is one of the most vital, Suzanne Keane explains why it’s so important.

I’m sure you’ve heard the joke about the blonde and the “710” cap, but if you had to buy oil for your car would you know what to get?

Engine oil is one of the most vital parts of your engine – without oil it won’t survive very long and the level needs to be checked on a regular basis.

Not only does it lubricate engine parts to prevent wear it also reduces friction, protects against rust, cleans engine parts among other benefits!

Different cars and engines will require a different oil viscosity. Viscosity is the oil’s resistance to flow. The oil needs to work at low temperatures (when you start on a cold morning) and also at high temperatures. The thickness of the oil will change as it heats up – thinner when hot and thicker when cold.

At a minimum, you need to know what oil your own car takes – ask next time it’s getting a service and buy a spare bottle to keep in the boot for top ups between services.

The most common type of service your car will require is an oil and filter change. When you put fresh oil into your car it will be clear and look a bit like vegetable oil. When it’s removed it’s generally a thick tar like liquid – if your oil ever has white bits or looks a bit like mayonnaise you may have a head gasket issue!!

Over time dust and dirt will build up in an engine, along with metal particles from the normal wear of engine parts – you need to change the oil regularly so that these don’t get above a dangerous level and to make sure your engine has a long lifetime.

In between oil changes the filter removes contaminants from the oil but like any filter it won’t last forever which is why it’s important to change the filter each time you have an oil service!!

What Do Car Warranties Cover?

The Three W’s of Car Servicing

Is your engine a ticking time bomb?