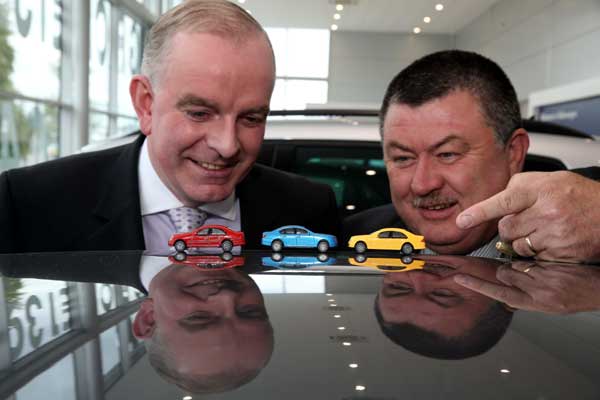 Tom Dennigan of Continental Tyres Ireland with Gerry Murphy, Chairman of the Irish Motoring Writers Association at the announcement of the field of runners for the 2014 Continental Irish Car of the Years awards

The winner of the Continental Irish Car of the Year  will be revealed at a gala event in the Crowne Plaza Hotel, Santry on Thursday 21 November.  28 Motoring Journalists, members of the Irish Motoring Writers Association will  decide which model is the best of the bunch for 2014

The 51 cars competing for the title of  Continental Irish Car of the Year 2014 are as follows:

Gerry Murphy, Chairman of the IMWA, commented: “The number of cars eligible for this year’s award is up from 36 entrants last year to some 51 new models for this year, that is a 38 percent increase.  And although we mightn’t see signs of it here in Ireland yet, the car manufacturers are certainly showing confidence in the wider European car market”.

The 28 voting members of the Irish Motoring Writers’ Association assess each vehicle, attributing points on the basis of criteria ranging from innovation and safety, to space, comfort, build quality, driving quality and value for money.

“For anyone in the lucky position of looking to renew their car with a 141 reg in January, the IMWA car jury provides a great service for Irish motorists in helping them to make sense of the array of new cars that has been launched in Ireland this year”, commented Tom Dennigan of Continental Tyres Ireland, Irish Car of the Year sponsor.

A shortlist of vehicles will be announced in the coming weeks.