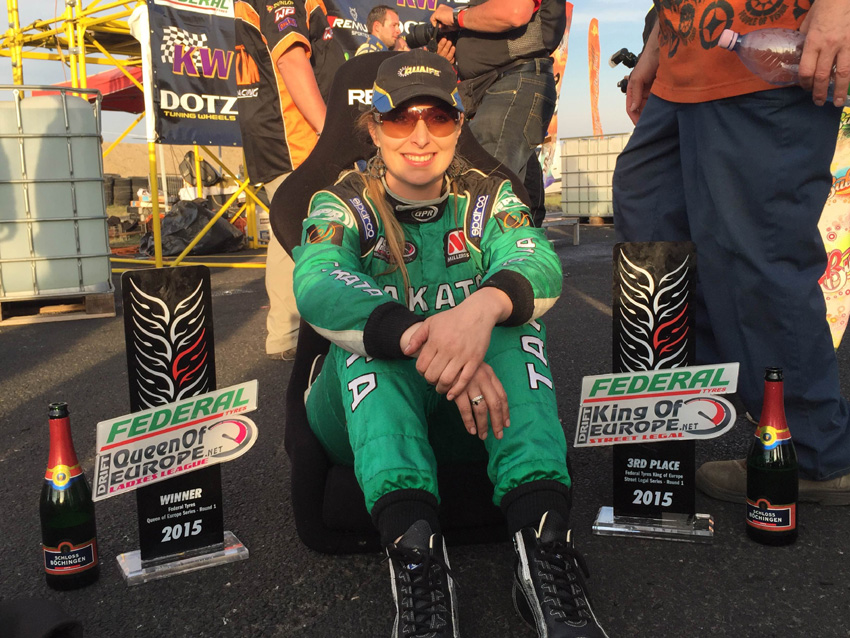 Danielle Murphy – some more trophies to add to the collection. Photo by Farkas Zoltán

Last week my  mother and I  made the first of many road trips to Europe for my Championship quest this season. My first round for the Queen of Europe Championship was held last weekend at Tokol Airport, just outside Budapest in Hungary. With a completely different and new set up in my car with a Quaife sequential gearbox and Wisefab front suspension to give me even more steering lock, I had very little time to adjust, actually none! Practise on Saturday gave me some track time to adjust to the feel of my car, it took a little longer for me to stretch my trust in the steering compared to what I was used to previous, knowing the limit before hitting a spin, which would be detrimental in my points, giving me a zero score for my runs.

As the day progressed I was getting more and more confident, the track was very technical but really suited my aggressive style of driving. With the new gear ratios being a little shorter to what I’m used to, I used the track to suit my car and not the other way around. Qualifying began at 4pm, it was all or nothing. 2 laps to try secure the top qualifying spot in the Queen of Europe was my goal, Qualifying first actually gives more bonus Championship points, than actually winning the event, I lost the Championship by 2 points last year due to this technicality, I’m not losing again this year!

People started to come to me to congratulate me on my first place qualifying result, I had not seen the results board yet and “Presumed” Id topped the QOE qualifying, but until I seen it myself I was not getting excited… I looked at the board to not only realise I had qualified first in the QOE but Id actually topped ALL 4 Championship qualifying spots, including the Hungarian pro series!

Sunday came and it was battle day. We had practise for 2 hours and then into the first battles which was the Queen of Europe. After going a One More Time in the Finals against Karolina Pilarczyk, I was not getting beaten! I pushed every bit of the 475bhp of my car to the final corner as hard as I could and thankfully I secured the top position.

The excitement wasn’t about to end here! I had to prepare immediately to battle against the guys in the King of Europe class, I could sense some nervousness and tension against some drivers in the class, but I also knew these battles were never going to be easy, no man wants to get beaten by a woman eh!

I had my eye on the podium and I fought with everything I had, my first battle I had a really hairy moment as I was completely blinded by the tyre smoke of the car in front on my chase run, I had to make the split decision to either hold back or keep going, blind. Of course, I wasn’t stopping! I continued with the same speed and hoped I had gauged my position on the track, I literally could see nothing! I braced for a moment that if this guy had actually spun or slowed down, I was going to have a hard impact with his car… Thankfully I came out the car side of his tyre smoke and we were almost side by side, even over my concentration and the loudness of our 2 cars engines screaming, I could actually hear the cheers from the crowd as my car because visible through the smoke, they obviously had the same hairy moment I had just watching!

As my battles continued, I had lost my position to possibly battle in the finals due to an error, I had changed wheels which were lighter than my others, therefore I was with reduced grip, and this was obvious to the judges and also me driving, over average my lap was slower so my opponent succeeded to the finals, I still had the 3rd and 4th place battle though, so I changed the wheels again and I was back on a mission, I “WAS” taking 3rd place for a second podium!

My next event is at home in Ireland on April 24-26th in Mondello Park for the first round of the Irish Drift Championships, I will be the only female competitor there, so come and support me if you’re about!