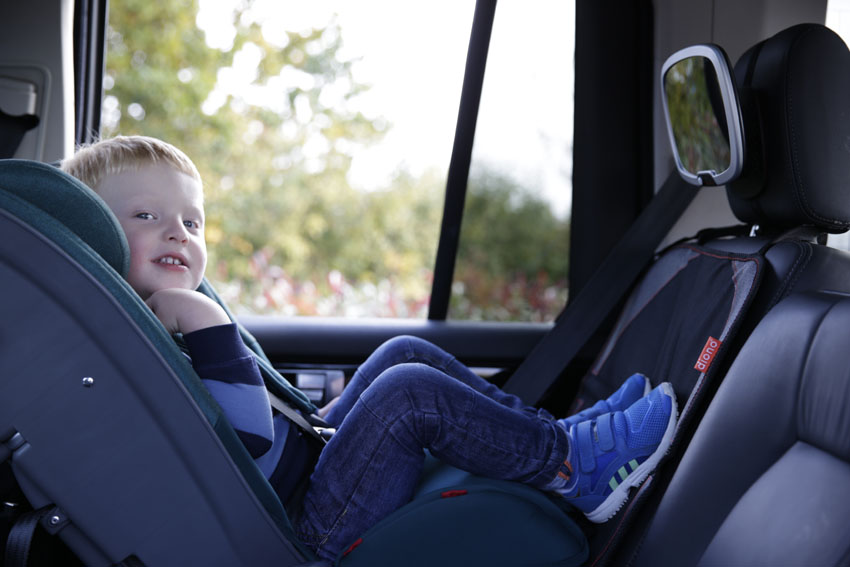 What is it? Diono is a brand from the USA who manufacture car seats, buggies and car seat accessories. Originally known as Sunshine Kids Juvenile Products they invented the first steel frame folding child seat in 2005 – the Radian. The Diono Radian 5 is a seat suitable from newborn until approximately 7 years, or 25kg. The main feature of this seat is that it can be used rear facing until 25kg but if necessary can be turned forward facing, with a 5-point harness, from 9 – 25kg with use of a top tether. The narrow design takes up less space because due to the steel frame it’s not necessary to have thick plastic sidewalls. As it’s one of the narrowest seats on the market the Diono Radian 5 is ideal for anyone who’s a little tight on space in the back seat or needs to fit three seats across. Due to its design, it can be installed in almost any car and with the optional angle adjuster pad it can allow plenty of space for those sitting in front. For storage or for travelling the base of the seat folds up and it can be carried as a backpack if you’re flying.

What’s in the box? The Diono Radian 5 car seat comes with a rear facing base, seat belt lock clip, infant insert, tether straps, infant shoulder pads, additional supergrip shoulder pads for older children (15-25kg) and a cup holder. The seat also comes with a rear facing bolster for use when the seat is placed in the front passenger seat (only with the airbag switched off).

Fitting Because the Radian 5 can’t be adjusted while fitted it’s important to set it up for your child before installing. As DS is just 10 months old we had to use the infant insert and the harness straps were adjusted down to the second last setting – plenty of room for growth! At first the amount of adjustment available is overwhelming but this is a seat that can grow with a child and meet their requirements at every stage. Run the 3-point seatbelt under the seat, through the guides, and clip it into the correct seat belt buckle. Then push down on the seat as hard as you can and feed the seatbelt back into the retractor as much as possible.

Once it’s tight enough a seat belt lock clip connects both parts of the belt together. You can test the tightness of the seat by holding it at the base and trying to move it. A tether strap then connects to a fixed point underneath the front seats, preferably the seat runner, and this is tightened until the indicator on the connection changes from red to green!

As always, if you’re unsure about fitting your car seat yourself take it along to a check it fits by the RSA!

See if the Diono Radian 5 will fit your car here

What about daily use?
Tightening the straps took a bit of getting used to as it’s a ratchet system but once I got the hang of it the methodical fastening was very reassuring. We had a few long journeys while testing out this seat and didn’t have any complaints from my co-pilot so the memory foam seat covering must be comfortable. The infant insert makes it a really cosy place to sit for babies and toddlers but the sides of the seat base fold down for older kids to allow them to easily climb in and sit cross legged.

Are there many accessories?
I used the Diono Ultra mat under the seat to protect the car seats. The seat comes with one cupholder (not just for cups, they can hold toys too) but you can attach up to 4 to each seat. An angle adjusted pad is also available to reduce the recline for older children which will give some much-needed space back to the front passengers and you can buy a carry bag for easier transport.

And safety?
The Diono Radian 5 boasts a one-piece steel frame – Metal reinforcements and the best EPP foam combine to provide the ultimate side impact protection, whilst the straight side walls ensure your child stays contained in the seat during a crash. Like all rear-facing seats it offers children a safe cocoon while travelling. The seat has passed all required EU tests under the ECE R44/04 Regulation.

In the ADAC testing the Radian 5 lost points due to its complicated nature – as the seat is so adjustable to suit from newborn to 7 years old there’s a chance that someone could make a mistake with installation. In the same test a video shows the harness pads being installed incorrectly for 15-25kg forward facing and Diono have since updated their instruction manuals to reflect the importance of this. The Radian 5 is also TUV approved for use on aircraft for group 1 and 2 (9-25kg).

Why you’ll want one
Narrow seat; Will last a long time; Lifetime warranty

Disclaimer – Wheelsforwomen was sent this car seat from Diono to review however all reviews are unbiased and honest. This is not a sponsored post.

Are You Sitting Comfortably?