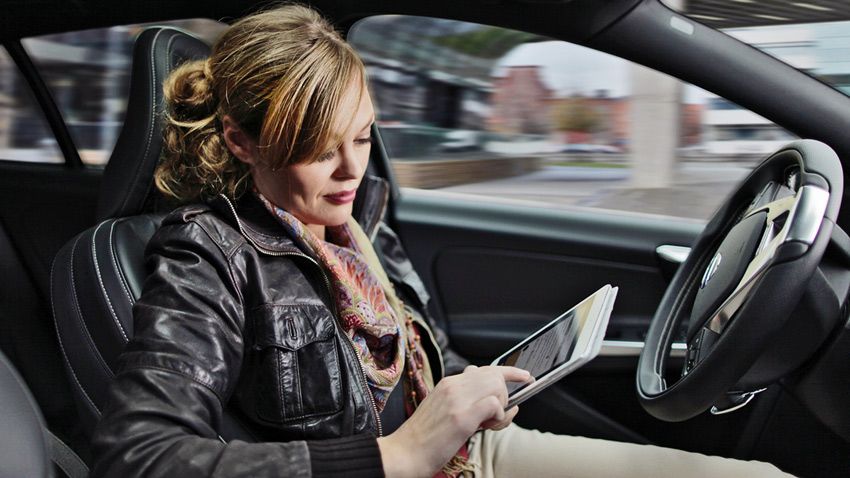 A new technology which allows traffic lights to ‘talk’ directly to motorists  is being trialled by the North East Ambulance Service in Newcastle. Through a small device on the windscreen cars can request a green light from a traffic light when it is within 100 metres. For the patients it means a safer and faster way to hospital and for the ambulance service it means reduced fuel bills.

The plan is to expand the scheme across the city in coming years  to ease congestion and cut pollution.

So how does it work?
1 The device in the car detects the traffic lights ahead
2 Sends a request to switch to green
3 The traffic lights responds to the priority request and tells the driver what  the optimal speed is to ensure always hitting a green light

Can cars talk to each other?
General Motors rolled out a vehicle to vehicle project as far back as 2007 which allowed vehicles to communicate with each other. The system used  satellite technology to detect other vehicles and triggered an alarm if the car was on a collision.  Cars could also send info to the driver about a car stopped on the inside of a corner, a car braking hard up ahead, vehicles lurking in your blind spot, road works and inform motorists of emergency vehicles coming your way.

What can we expect to see in future cars?

Driverless cars, what is next?
The first stage of driverless technology in everyday cars is likely to be designed for slow congested traffic.  For example Volvo plan to introduce a version of the new XC90 that will have the capability to take over the steering and acceleration in a car and simply follow the car in front at speeds of under 50km without any input from the driver. The new Q7 from Audi will employ similar technology.
And next ?
In the next three to four years its likely cars will be able to navigate motorways self driving
But what about everyday city driving?
This will be the last and most challenging obstacle for driverless cars as the system will need to be able to respond to everything from pedestrians and cyclists to animals. Currently the sensors used in driverless cars struggle to cope with potholes, faulty traffic lights and unexpected diversions.

To hear more about driverless technology listen back to Geraldine Herbert talking to Shane Coleman on the Right Hook, Newstalk  here ( 33.42 mins approx)

Put Your Lights On