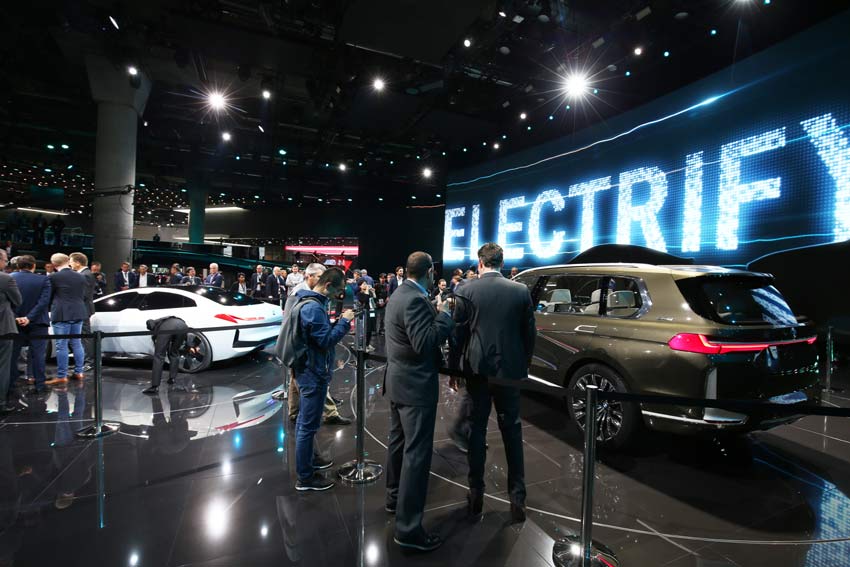 The future is electric was the clear message from the recent Frankfurt motor show.  In the wake of the Volkswagen emission cheating scandal and with evidence of harmful pollution directly attributable to diesel, the global move against it has been ramped up and car makers are under increasing pressure to deliver new cleaner technologies and electric alternatives.

German car makers in particular have been accused in the past of simply defending diesel instead of planning for the future.  Anxious to prove they are now doing precisely that Harald Krüger, Chairman of the Board of Management of BMW AG announced plans to have 25 electrified models in 2025 – 12 of them fully electric. Similarly Mercedes promises 10 by 2022 while Volkswagen unveiled it’s plan to develop 80 new electric vehicle lines to production by 2025 and outlined their “Roadmap E” strategy.  Volkswagen Group CEO, Matthias Mueller referred to the plan as a “yardstick by which we measure our performance.”

All of this is in sharp contrast to the Frankfurt motor show of 2015 when clean diesels were a key player in future product plans.  But the VW diesel scandal that unfolded only days after the show opened, lit a fire under the entire car industry and initiated the demise of diesel.  Was the 2017 motor show the final nail in the diesel coffin? Not quite it seems as the transition to fully electric requires significant challenges to be overcome. Battery technology is still problematic and while battery costs have declined significantly in the last number of years, they need to be reduced further.  A scarcity or spike in the cost of the materials required could send prices soaring.  Range is still a matter for concern and 500 kms is the new gold standard many are promising to achieve by 2019 and later.

The promotion of electric cars also requires a huge commitment by governments with policies and direct supports including financial incentives and infrastructure and in some cases more negative interventions such as driving restrictions or even banning fossil fuel vehicles. This necessary intervention by governments is not without its critics, Carlos Tavares, the boss of Peugeot, Citroen and Opel argues that bans and regulations that compel the introduction of electric cars threaten the overall sustainability of the motor industry.

The move against fossil-fuel powered cars is global. Britain and France have already set target dates for phasing out diesel and petrol vehicles as part of an effort to reduce carbon and polluting emissions with even the Chinese prepared to set a date for the end of combustion engine cars and India is likely to institute a similar ban by 2030.

So while the future may be green there was a severe shortage of electric cars at Frankfurt that you could actually buy. Car makers may have pledged their soul to delivering electric cars but it is a long term plan and many will have no realistic offering until 2019 and some much later.

It is little wonder that some consumers may be cynical about the new era of clean motoring; was it not that long ago that diesel technology was championed as environmentally friendly and the purchase of diesel vehicles actively encouraged by the government?

According to BMW’s Harald Krüger “Customer needs must be anticipated and met. Therefore, we do not advocate driving bans and quotas. We believe in convincing offers with modern, efficient and emotional vehicles.”

But it seems the car manufactures are responding to regulation and bans in the move to electric rather than to market forces. Consumers may not be as eager to embrace the change as anticipated.

The reality is that for all the hype, Ireland is far from achieving the Government’s ambitious goal for 10% of all cars on the road to be electric by 2020.  Despite the fact that there is a wider choice than ever before of electric cars that are affordable and offer a workable range, concerns about  flexibility when compared to petrol and diesel engines, poor recharging infrastructure and uncertain resale value has resulted in a low take up.

As car makers respond to future challenges by dramatically shifting focus to electric vehicles, what will plug the diesel gap in the meantime?  The fastest growing and most profitable car type in Europe is still the SUV, with most powered by diesel engines.

An electric future requires considerable investment with less profitability guaranteed in the long run. Producing batteries, developing technology and redesigning cars are costly undertakings. None of it is without risk; the path to electric cars may be mapped but there are still a number of factors that could derail progress.   Car makers may just simply be peddling the illusion of change and could roll back on promises made. The production of batteries and sourcing materials could prove more challenging with higher costs than anticipated and rolling out a charging infrastructure may not be quick or easy.

So while new road ready crossovers and SUVs were as plentiful this week in Frankfurt as the multitude of concept electric vehicles, the question remains; can carmakers really deliver on those electric mobility promises in the future and if they do will consumers really be convinced.