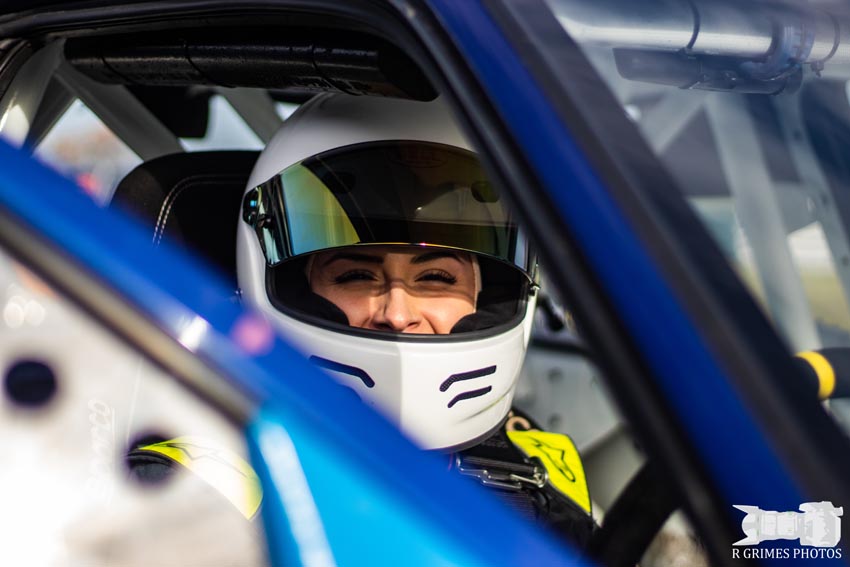 The annual Fiesta 6 Hour Endurance race was held in Mondello Park on Sunday the 4th of November this year. I was delighted to be invited to join Emma Dempsey, Aimee Woods (a fellow wheelsforwomen.ie contributor) and Nicola Watkins on the first ever all female team to enter the endurance race. We were proud to of had David Hall as our team manager and Coilin Clinton, Sabrina Larkin and Keelim Ryan as our mechanics and data engineers. After a few team meetings we decided to name ourselves WiM (Women in Motorsport) Racing and preparations for the race were underway.
Emma bought a Fiesta we had scoped out to be a good base to start from and had previously been known to be a quick car. After testing the car at a track day we all got the chance to get a feel for it and take note of what we felt needed to be done to the car ahead of the race. We passed the car on to the very trustworthy Coilin Clinton to let him work his magic and we began planning pit stops, how much fuel we needed, how long we would need to each spend in the car, etc.

Testing the day before the race was a very wet and interesting one. All four drivers got plenty of time to adjust themselves to the car and get used to the changes made since the last track day. I’ve always said I’m not comfortable driving in the wet yet but after getting some valuable advice from the team I headed out and after a few laps I was getting more and more confident with some seriously fun saves! That was until I exited turn 5 on the national track flat and hit a small stream of water and lost control of the car and put myself into the Armco sideways, without my HANS device on. My head got a hard smack against the window but luckily there wasn’t much damage done to the car. Biggest lesson learned, always wear your HANS device!

Race day arrived and we all woke up buzzing for the busy day ahead. We got the car through scrutiny and jumped straight into qualifying on a damp track. All of us pushed ourselves as much as we could as we only had one hour for qualifying and all four of us had to do at least 3 laps out on track. Somehow I qualified the quickest out of our team which meant I had to do the first stint and start the race for us. It was the first time I’ve ever done a rolling start, unfortunately, the rolling start wasn’t the best for the rest of us towards the middle or end of the pack (we started P22) as it had broken up after 2 laps behind the safety car. The first few laps were very busy with cars off here and there and the track sprayed with debris at sections so a safety car was called out twice within the first half an hour. We took one of these opportunities to do a pit stop and the next driver began their stint. Over the next three and a half hours we managed to fight our way right up to P13 and top ten was in sight. During my second stint, I tipped off of the NCH teams car coming into the last corner and smashed the left headlight. During a pit stop, our mechanics began replacing it but a fuse issue caused further electrical problems. With the scrutineers watching closely and the team working against the clock, we all began to feel the pressure. After over twenty minutes the team resolved the problem and Emma tore out of the pit lane (at the set speed limit, of course!) to begin her next stint. We knew straight away that we had lost our chance at a top ten finish but we remained positive and kept on supporting each other. We had dropped down to P26 due to our electrical issues and with most teams laps ahead of us we trudged on and started climbing slowly back up the grid. The first four hours of the race felt like they went by so quickly but as soon as it started to get dark it felt like everything went into slow motion. I was told by our team manager that I would be doing the last full stint and finishing the race in the pitch dark and rain and I began to panic a little. All I wanted was to bring the car back in one piece. With my three teammates fighting us back up towards top twenty I got into the car, quickly got myself settled and headed out into the darkness hoping for the best! Even with the huge pitch lights on most corners, I couldn’t believe how dark it was in the unlit areas. After a good few laps I was much more relaxed but there were a few incidents happening at once on the track and the safety car came out. As I began to slow down coming out of turn five a car nearly took me off the track trying to overtake me. I was waving frantically at the yellow flag and safety cardboard being held out by the marshals hoping the driver would notice but they didn’t. In the end, the race was red flagged due to the number of incidents on the track and all cars gathered back into scrutiny bay. Once I took my helmet off I turned around to see Tommy Byrne get out of the car that had overtaken me. Sure enough, I had a great time giving him grief about overtaking me under a yellow flag and safety car!

Something we all didn’t expect was how emotional we all would be once the race was over. Emma, Nicola and Aimee all came over to the car in scrutiny bay and we all found ourselves a little overwhelmed! We were the first ever all-female team to enter the 6-hour endurance race in Mondello Park and we finished which meant we made a little bit of history. I am proud to of raced with three strong, consistent and talented drivers. After packing up we all gathered in the paddock bar for a drink with the rest of the members of the team and there was a great atmosphere between everyone as I think we all felt satisfied and content with what we had accomplished throughout the race.

I couldn’t be prouder of the WiM team. So much went on behind the scenes in preparation for the race weekend and it was incredible to see everyone work so well together. We didn’t want the weekend to end but I think that’s a sure sign that WiM Racing may just make an appearance in the next 6-hour endurance race!

After much deliberation and weighing up my options, I have decided to compete in a second year in the Fiesta Zetec Championship. I was given an opportunity that I would be crazy to turn down and feel like another year in the Fiestas will do me a lot of good. I will be run by Clinton Motorsport and already can’t wait for next season to start! We have a lot of work to do in preparation for next season and I plan on using the offseason to get as much ready as I can. Hopefully, I will have more news for everyone in the following blog!

Ruth Nugent from Gormanston volunteered as a Motorsport marshal at Mondello Park in Co. Kildare for nearly 12 years but in 2018 she moved from marshal to driver and competed in the Fiesta Zetec Championship. Today she is a Racing Driver, Cyclist and is still a Motorsport Marshal. You can follow Ruth on twitter @roothnoogent

From Marshal to Driver – February 2018