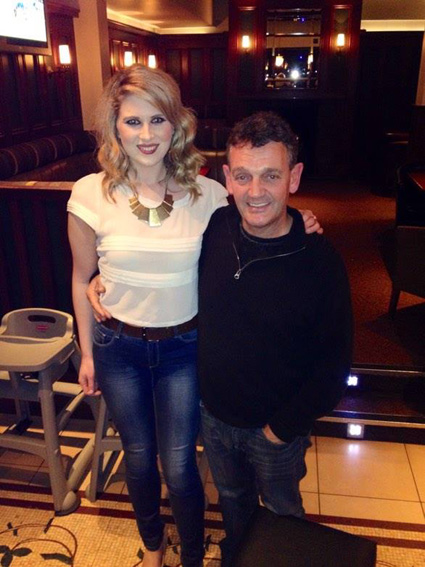 Aimee with the legendary Tommy Byrne

Seán Ó Cualáin’s documentary about Tommy Byrne, who, for a fleeting moment in the early ’80s, was the world’s greatest driver  is pure class writes Aimee Woods

As a Dundalk native it is difficult to remain unbiased towards Crash and Burn, the documentary film depicts the life and career of our own sporting legend, Mr Tommy Byrne. As a family friend, I have had the privilege of socialising with Tommy on a few occasions as well as picking his brains on his exceptional book “Crashed and Byrned” published in 2008. It has always remained a mystery to me how the world was oblivious to this enigmatic man, especially having listened to the stories about him from my parents. I almost felt relieved that the film would finally remind the world just how talented Tommy is. When Eddie Jordan said; “Tommy Byrne was the best of them all” this proves him absolutely right.

The film opens with Tommy explaining how he believes the world sees him as the man with a chip on his shoulder – and why wouldn’t he? Tommy famously achieved the impossible by climbing the elitist ranks all the way to F1 in four short years, along the way blitzing his way through the Formula ford and Formula Three series’.  We begin Tommy’s journey with precious footage from his past and explore his humble world through a series of home videos and reminiscing with family friends on times gone by. The nostalgic anecdotes are extremely effective in setting the scene for the young “bad boy” who was starting out on his journey to glory – an “absolute brat” as his close friend Maurice describes him. Despite his  supposed lesser loved characteristics, we gain a genuine insight in to just how loved Tommy was as we watch  his family and friends race around (excuse the pun) in the hope of assisting him on the way to achieving his dreams.

We then delve into Tommy’s rise to the (almost) top with all of the sheer desperation and sacrifice, his own and others that lead him to racing in the UK championships. It perfectly encompasses Tommy’s wit and cockiness that you cannot help but fall head over heels for. The world has bowed down – myself included, to inspirations like Senna and Hunt whether for likability or talent but Byrne will make you second guess them both. He doesn’t need an edge, an angle or a sob story – he is the living embodiment of success through adversity. Watching him clamber his way through the ranks filled with self belief and determination with absolutely no financial backing will send shivers down your spine and fire through your belly. The nail biting scene in Tommy’s fight for the Formula Three championship having missed four races to test with F1’s Theodore team in order to win the ultimate test with McLaren is illustrated with the most phenomenal footage.  Even knowing the outcome won’t stop you from tensing up throughout the battle.

The documentary of course turns toward sadness and despair.  Even though Byrne continuously demolished his competitors –Lauda, Senna etc, it wasn’t enough to land him that coveted seat in F1. The harsh reality that money is power and talent will not always carry you when your identity is firmly rooted within a working class circumstance. As a member of the motorsport community we feel this plight all too often, but Tommy had never allowed it to define him but this time he wasn’t given that option. His subsequent descent is accompanied by alcohol, drug use along with family breakdown and you really have to wonder how he kept it relatively together before it all came to a startling reality during his time in Mexico.

Each scene whether modern, illustrated or from the past perfectly recreates the cruelty of Byrne’s fate. Public opinion has focused on how the film fills you with a sense of depression, anger towards an unjust world, misery and sympathy towards our cheated protagonist. I feel completely the opposite. Crash and Burn filled me with that infectious determination, self belief and a new arrogance about myself towards my own racing journey however insignificant by comparison. Tommy makes you want to go faster, try harder and never apologise or excuse anything that you are. In a world that tells us every day to reach for the stars, that we have so many opportunities and if we try our best we will succeed (the pressure). Crash and Burn proves that there are exceptions to the rule, but Byrne makes you want to try anyway. The man with nothing did in fact make it to Formula 1 and isn’t that something? As a true Dundalkian, this film is pure class.

To win tickets to go along to special screening of Crash & Burn and a Q&A  with the star of the film Tommy Byrne, on Dec 2nd, 2016 enter our competition here

WIN tickets to a special screening of Crash & Burn

Review of the Dyson DC58