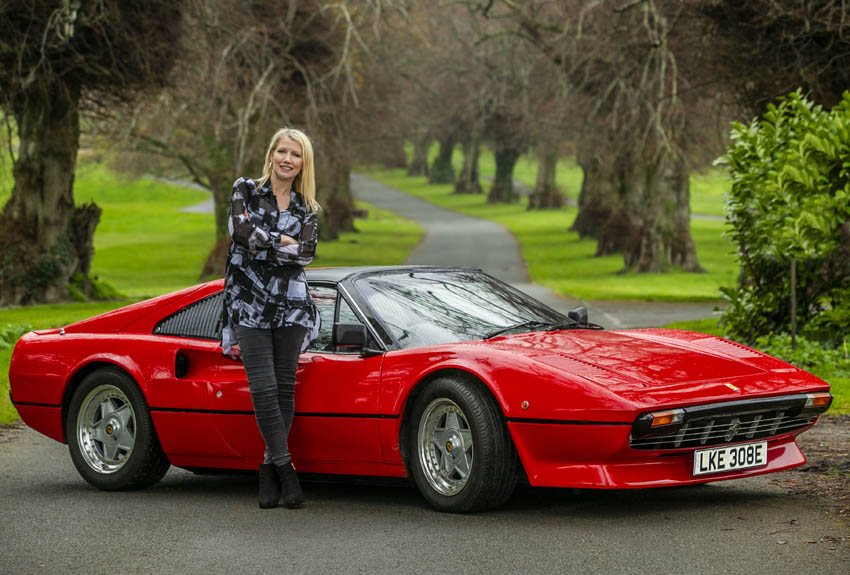 Geraldine Herbert with the Ferrari 308. Images by Kyran O’Brien

What is it? One of the most dynamic duos of the 80s was Tom Selleck and his red Ferrari 308 in the long-running TV show Magnum PI. Now nearly 40 years on, the Ferrari 308 still features high on many collectors lists and while it may not have been the most powerful Ferrari, it still had that much coveted V8 exhaust tune. But can you have a Ferrari without such a sound and more importantly would you want one? An Irish company Electrifi have done the imaginable and swapped a V8 engine for battery electric power and created probably the world’s quietest Ferrari 308.

Is it a looker? One approach to conversion is keeping classic cars as original as possible and is the philosophy behind the Electric 308 I drove. This 308 may look like a Ferrari but beneath the sleek, red bonnet throbs an engine that is not measured in cubic centimetres. The only external clue to the car’s true power source is the E on the registration plate.

Why convert a classic? Traditionalists might baulk at the very idea but for fans of cleaner cars with very deep pockets, this just might be their dream one. Classic cars may boast timeless design but in these post- dieselgate times their high-polluting engines risk consigning them to the annals of history. Converting petrol-guzzling classics can also play a part in reducing carbon emissions.

And on the road? And despite maintaining the integrity of the car through the entire process including retaining the unassisted steering, the car is now faster than it was and actually goes from 0 – 100 in half the time it did in its heyday. Powered by Tesla batteries and motors it is shockingly fast. Slip behind the wheel and it is vintage Ferrari but put your foot to the pedal and it’s eerily quiet.

Will it break the bank? The economics of converting vintage cars means, for now, they will have a niche appeal with prices starting from €750,000 for the higher end models but cars in time Crowley believes will be available priced from €30,000. The company has already sold out its delivery capacity for its high model range for the next 18 months. Crowley plans to invest €50 million over the next 3 years and manufacturing has already begun in the Electrifi plant in Wales and the first cars will leave the Irish Plant by the end of the year.

What is says about you? You appreciate classic elegance and the finer things in life