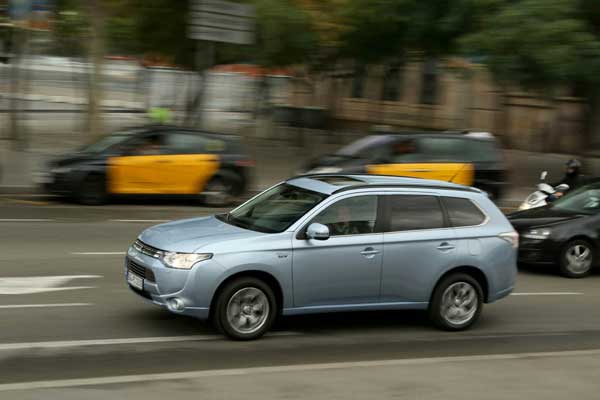 What is it? It may look like a regular Outlander but the Outlander PHEV is the world’s first four-wheel-drive plug-in hybrid electric vehicle or PHEV in short.

First impressions of the new Mitsubishi Outlander PHEV?  There is no sign initially that this is an electric vehicle,  it looks like a well equipped SUV with no restrictions on interior or boot space and goes off road as well as on road.

What about the interior? There is also a huge amount of space. One of the drawbacks of hybrid systems and electric cars is that the battery pack tends to take up quite a bit of space but this is not the case with the Outlander. Cleverly the battery is under the rear seats so there is virtually no difference between the PHEV and the diesel version in terms of boot space. It is however strictly a five seater and the last row of seats have been sacrificed so if you need a seven seater opt for the diesel version.

So how does it actually work? Okay so here comes the science …… under the bonnet is a 2.0 litre petrol engine but that doesn’t actually make the wheels move instead it acts as a generator and replenishes two electric motors, one in the front and one in the rear.  On the road you can drive it purely in the electric mode at speeds of up to 120 km but if there is not enough charge in the battery the petrol engine will kick in to top it up. This happens seamlessly and you will be totally unaware of what is going on. Essentially it drives in electric mode at lower speeds and with the electric motor sported by the engine at higher speeds.  You can intervene if you want the battery to charge on the go or you can select a ‘save’ button which will preserve whatever is left in the battery. To charge it you can simply plug it into a domestic socket and it will take less than 5 hours. There are other faster ways to charge depending on your access to them. 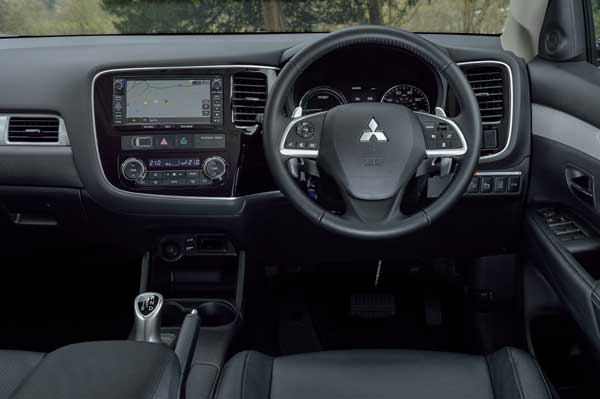 And on the road?  It is good to drive as it is quite low to the ground and feels very stable.  We took it on a mixture of country roads and motorways and while it was impossible to gauge an accurate fuel figure the battery will certainly cope with around 50 km. The PHEV also has regenerative brakes, what these do is each time you take your foot off the accelerator the battery is being charged and you could adjust  the level of regenerative braking by moving the paddle shift leavers on either side of the steering wheel.

How Much? Charging the Mitsubishi Outlander PHEV overnight costs about €1.20 and you get about 50km on a full charge so if your daily commute was within that you would rarely if ever need to fuel it. It also has just 44g/km CO2 and can potentially return 1.9L/100km or a staggering 148mpg depending on how it is actually used.

How Safe? The Outlander offers all of the same safety as the regular version including a five star rating from the EuroNcap.

What about my options?  There is a choice of two trim levels available; the entry level Intense+ priced at €41,950 and the top-of-the-range Instyle that is available at €47,450

A range of finance offers from Mitsubishi Motors