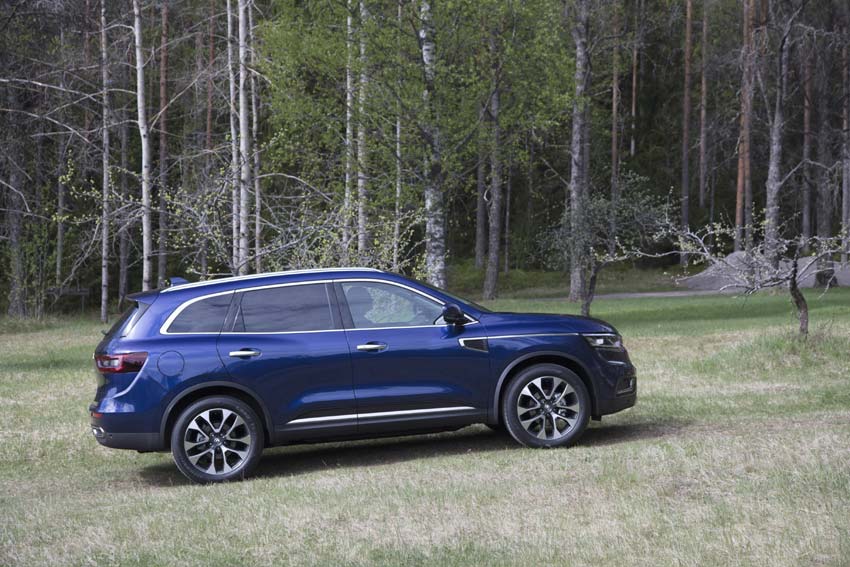 What is it? The Renault Kadjar has a proved a popular alternative for those seeking a little more space than the Captur, and now the new Koleos offers even more comfort and space and completes its trio of SUVs. The Koleos is based on the Nissan X-Trail, although you’d be forgiven for not spotting the influence as the exterior is instantly recognisable as a Renault, thanks to its signature C-shaped LED Daytime Running Lights and prominent front logo.

What about the interior? Climb inside and it is even bigger than you might expect. The Koleos is officially a D-segment SUV, meaning it’s the SUV equivalent of a large family saloon and promises a spacious interior, multiple storage spaces and saloon-like driving dynamics. Behind the wheel, the driving position allows for good visibility and, with rear passenger legroom among the very best-in-class, three tall adults sitting in the back would be happy on pretty much any journey.

In contrast to many rivals, Renault has opted to focus on extra passenger space and comfort over practicality, so the Koleos is a five-seat-only configuration.

As a family car, it has the lot, including myriad different places to put your drinks, phones and tablets, along with an 11-litre glove box and a seven-litre cubbyhole in the centre console. Luggage space is also good, with a useful 579 litres in the boot and if you’ve been on a spending spree, you can fold the back seats down to make it even bigger. 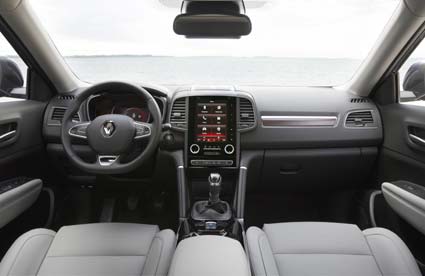 Inside the Renault Koleos

Engine choice?  Interestingly, given the concerns of some buyers as to the future of diesel, Renault is not offering a petrol option for the Koleos. Instead, two diesel engines power the range: a 130bhp 1.6 litre unit that comes with a six-speed manual transmission and front-wheel drive, and a more powerful, 175bhp 2.0 litre unit with all-wheel drive and a choice of six-speed manual or a seven-speed X-Tronic CVT automatic transmissions.

Renault Koleos on road?  On the road, it is quiet, well mannered and corners without rolling too much, given its size. The steering is light and will appeal to its target audience.

Renault Koleos off road?  While the roads around Helsinki didn’t provide a great opportunity to really test the car, we did put the off-road capability to the test on some rugged Finnish terrain which you can watch in the video below.
Geraldine takes the Koleos off road  (Video Filming by Renault)

Will it break the bank? Prices start at €34,490 for the 1.6 (130bhp) and from €40,490 for the 2-litre diesel (175bhp). Motor tax ranges from €270 for the 1.6-litre to €390 for the 2-litre and fuel economy from 4.9 to 5.9 litres per 100km, depending which version you opt for. What are my options? The Koleos isn’t the cheapest five-seat SUV, but in this case you get what you pay for, the entry-level trim Dynamique S Nav includes cruise control, speed limiter, 7in touchscreen R-LINK2 multimedia system, 18in alloys and panoramic sunroof. Trade up to Signature Nav to gain 19in alloys, full black leather upholstery, heated front seats, 8.7in touchscreen and auto tailgate.