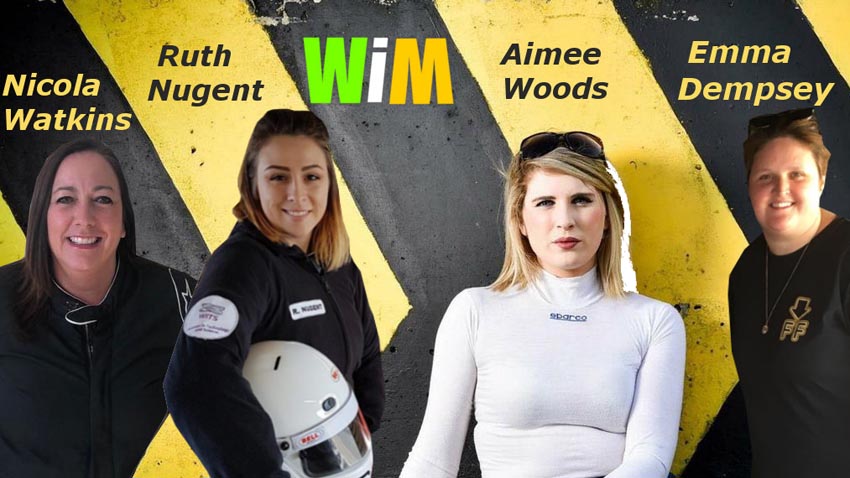 4 female racing drivers will come together to compete in the 6-hour Endurance race on Sunday, 4 November race starting at 12pm and finishing in the dark at 6pm writes Geraldine Herbert

4 female racing drivers Emma Dempsey and Nicola Watkins along with two of the team from wheelsforwomen Aimee Woods and Ruth Nugent will race against some of Ireland’s top racing drivers including ex Formula 1 Legend Tommy Byrne.

Emma Dempsey (Ashbourne, Co Meath) was born into the Motorsport paddock. Her father Cliff Dempsey was a well-known racing driver before setting up his own successful race team Cliff Dempsey Racing in 1988.  For many years Emma looked on as a spectator until she was given the opportunity to race for the Formula Female race team in a 160bhp Rover 25Gti at Mondello Park’s 50th Anniversary celebrations. You would know Emma has racing in her genes – she competed in the 50minute endurance race and managed to bring the car home in first place in her first race.  At the Leinster Trophy Meeting in September Emma raced in the Mick’s Garage Future Classics class where she had a strong top six finish in both rounds, battling against some very experienced racing drivers.   Emma is also an experienced race mechanic and has been working hard to prepare the Zetec Fiesta for the 6-hour race.

Ruth Nugent (Gormanstown, Co Meath) finished her first season competing in Motorsport within the top ten of the Patch Tyre Equipment Ford Zetec Championship.  Before Ruth was a racing driver she was a massive Motorsport enthusiast and has been a passionate and dedicated marshal for the past 12 years.  Ruth has impressed many people around the Mondello paddock this year with her driving ability and has huge support from everybody in the sport.  Ruth brings a lot of experience to the team after driving in the Zetec class in both the National and International tracks at Mondello Park and in Bishopscourt this year.  Ruth is clearly buzzing ahead of the Fiesta 6hr and said “I’m very excited and proud to be competing in the first all-female team at the Fiesta 6hr endurance race. I feel that we will be competitive and definitely one to watch! This is a fantastic opportunity and I’m looking forward to seeing how we do working together.”  Ruth has her own blog on wheelsforwomen “From Marshal to Driver“.

Aimee Woods (Dundalk, Co Louth) is no stranger to Irish Motorsport, following in the footsteps of her father Sean Woods, a successful saloon driver who continues to run his own racing team.  Aimee has competed in many classes throughout the years. She began her racing career nine years ago in the Fiat Uno Championship, moved on to compete in rally sprints and then graduated to single seaters – placing 3rd in the Irish Formula Vee Finol Star of Tomorrow Championship.  Aimee currently instructs at Mondello Park and has buckets of experience racing through the years so is well used to male dominated grids.  She will certainly put up a good battle with some of the quick guys up front.

Aimee is determined to see the team do well:  I’m glad to be competing within a team that I feel will be competitive. It’s a great opportunity to see how well women can work together and learn from each other. It’s an exciting project to be a part of. Aimee is also a regular contributor to wheelsforwomen.

Completing the four-driver team at WiM Racing is Nicola Watkins (Drogheda, Co Meath), a successful business women and public relations consultant who has raced with the Ford Fiesta Zetec class since it launched in 2013. Nicola has been around Irish motorsport all her life – her Dad Alex Watkins raced Formula Fords in the 1960s and was a safety and eligibility scrutineer for almost 30 years while her brother Alan Watkins has won 8 Stryker championships as well as this year’s Irish Supercar Championship.  Nicola started in motorsport driving in Sporting Car Trials (Mud plugging) when she was just 14 years of age and reached Grade A by the time she was 17.  Nicola commenced track racing in Irish Strykers before joining the highly competitive Ford Fiesta Zetec class where she has raced in Mondello, Bishopscourt and Brands Hatch.  Nicola commented “I’m thrilled to be racing with the Women in Motorsport team, I’ve wanted to pull together an all-female team together for some time however there just hadn’t been enough female interest until now.”

Hutton & Meade team up with Jenny Murphy and Lucy Mulhall