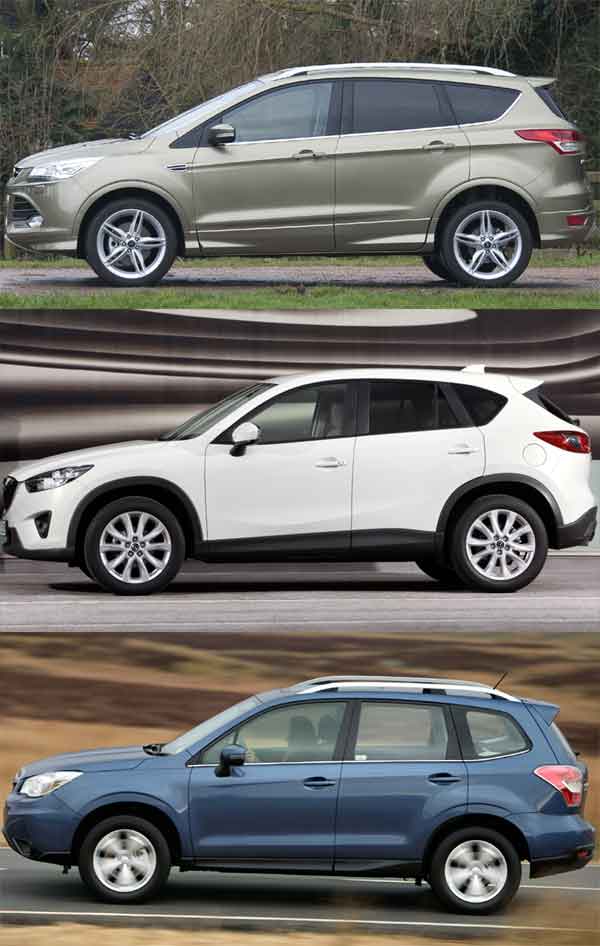 What is it? An ever increasing array of crossovers and SUVs are fighting for our hard earned cash this year. Subaru’s Forester, Mazda’s CX-5 and the Ford Kuga are all competing for sales in this popular market sector.

Who is it aimed at? From urban schoolrun soft-roaders to rugged looking warriors  for families looking for a compact SUV in the €30K price range are spolit for choice.

Styling? Ford has toned down the muscular off-road look of the previous Kuga in favour of a sporty, slick sophistication. It is certainly more stylish, and overall it’s a car with the most road presence, whether at the school gates or retail car parks.

On the other hand, Mazda has played it safer with the CX-5 and has opted for a masculine but overall bland look, designed no doubt to garner favour with soccer moms and dads in equal measure. In contrast, the fourth-generation Subaru Forester has smoothed out some of the rougher edges of previous versions and is now bigger and more practical than before. While it’s still probably the most utilitarian of the new bunch, the look is more mainstream despite muscular wheel arches and distinctive angular lines.

Under the Bonnet? We tested the diesel option in all three cars, with fourwheel drive. The 2.0 TCDi in the Kuga produces the least power and torque but feels quick and light on the road. The Forester, on the other hand, is equipped with allwheel drive and our 2.0 litre test car produced 147 bhp and 350Nms of torque. It hasn’t the most refined of engines but it returns 5.9 litres per 100 km or 48 mpg on a combined cycle, which is identical to the Kuga’s economy.

The 2.2-litre CX-5 engine generates 380Nms of torque and 150bhp. This diesel is one of the best in any segment, and thanks to Skyactiv technology is also one of the most frugal, our 2.2 litre diesel quoted a combined cycle fuel economy figure of 5.2 litres per 100 km or 54 mpg.

In this market, 0-100kph times really aren’t much of a concern, but for the record, it’s the CX-5 that’s the quickest of the lot at 9.4 seconds followed a second later by the Forester. The slowest of the bunch is the Kuga. 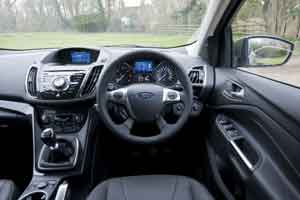 Inside the Ford Kuga

What about inside?  From the driver’s seat, the Kuga is reminiscent of the Focus, with the same smart but cluttered dash. There are nice tactile surfaces and good quality throughout. The cabin feels roomier, but when compared to rivals it is by no means huge. Overall, the fit and finish of the Kuga easily edges out the CX-5 and the Forester for interior quality.

Inside the CX-5 is more utilitarian or child-friendly, depending on your perspective, and while some might yearn for more excitement or bling, it is comfortable and refined. While hard plastic is still evident in the Forester, the spacious roomy cabin more than compensates.

If a family car is measured on how much stuff it can hold then the CX-5 is the most practical of the three. The boot is a decent size with a 505-litre capacity with the seats in place. With the rear seats folded down this increases to 1,620 litres. The Kuga has the smallest boot with the seats up, at 406 litres, but folds down to an impressive 1603 litres.

On the Road? On the road, the Kuga has lost some of its earlier appeal but it still retains a car-like driving experience and is rivalled only by the CX-5 for driving dynamics. Road and wind noise have also been significantly reduced and it is now one of the quietest cabins in the segment. As for the Forester, it is pleasantly surprising – tap the accelerator and this boxy car has a sporty side – but it is the CX-5 that truly impresses: it is effortless to drive, nimble and agile on the road and there’s even a reassuring vroom sound. 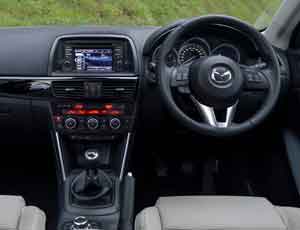 Inside the Mazda CX-5

And Safety? All three achieved the maximum five stars when tested by the EuroNCAP with the Forester achieving the highest score for child occupancy safety and the Kuga in the Safety Assist category.

Options and Price? The CX-5 comes with a choice of 2WD or 4WD, powered with either a petrol or diesel engine. Prices for the 2WD petrol start at (EURO)28,995 and for the diesel with 4WD at (EURO)35,645. In contrast, the Kuga is available only with a diesel engine but also offers two- or four-wheel drive options. Prices start for the Kuga at (EURO)29,995 for the two-wheel drive option and (EURO)37,950 for four-wheel drive. All Subaru models are equipped with all-wheel drive but there is a choice of petrol or diesel and both are priced from (EURO)34,995.

Verdict? Choosing an SUV depends on individual tastes, needs and budget, so a buyer could easily be swayed by any of these three cars. The Kuga is still one of the best to drive. With a smart interior and stylish looks it is also, however, the most expensive car here. The Forester is surprisingly good to drive and is probably the one to opt for truly serious off- road exploits but it’s a little less refined than the others. 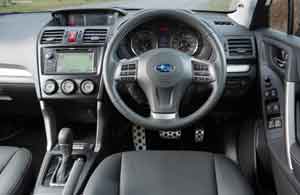 Inside the Subaru Forester

The CX-5 with its incredible economy and decent road presence has a bit more emotional clout. It’s also more exciting to drive too, but the CX-5 isn’t focused solely on performance with plenty of room for five adults and a spacious cabin, it is also about family practicality. Overall it’s the best all-rounder, and would be our choice buy; just make sure Junior is well strapped in when you zoom down those back roads.