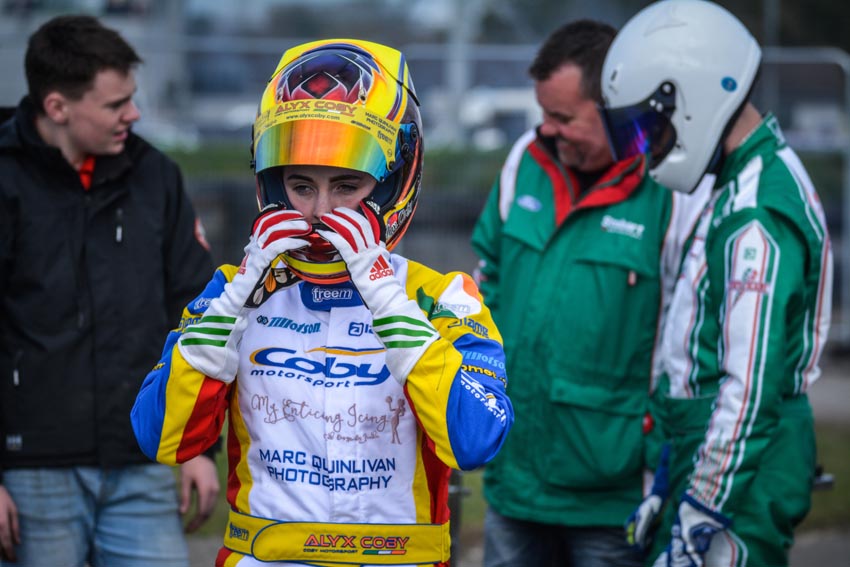 Alyx Coby prepares for her race at Round 2 of the Motorsport Ireland Karting Championship at Mondello Park. Photo: Marc Quinlivan.

13-year-old Alyx Coby, from Newbridge, Co. Kildare, was on the grid at Mondello Park as the Motorsport Ireland Karting Championship made the first of three visits to the circuit this season.

Alyx put in a strong performance last season when the series returned to the Kildare circuit after an 11-year break with a podium finish and also setting the lap record around the 900 metre Junior track.

The introduction of a new bus stop section on the back straight of the circuit for this season meant Saturday’s test session was spent learning the new layout and trying to adjust the kart setup to find the right balance between straight line speed on the long straights and power delivery for acceleration out of the corners.

Sunday’s racing got off to a damp start and with rain forecast for most of the day securing good results in the two qualifying heats was going to be crucial.

Starting in sixth place on the grid for the first heat, Alyx made up four places in tricky conditions to sit in second place by the time the karts exited the first corner. She managed to defend the position for four laps before being overtaken when the chasing driver got into her slipstream on lap 5 and finished the race in third place.

For the second heat Alyx was due to start in 8th place and with the track had dried out and all drivers on slick tyres, Alyx was confident of getting a good result; however electrical issues with the kart on the grid meant the Newbridge teenager would be unable to start the race.

With the electrical issues resolved, the first of the day’s finals got under way after the lunch break, and as Alyx not taken part in the second heat she would line up in 10th place. A good result in this race would be critical as it determined the starting positions for the second final.

As the karts came out of the first corner Alyx had made up five spaces to sit in fifth place, and by lap 4 was running up in third. Over the remaining laps she was locked in a game of cat and mouse with the chasing driver where he would use the slipstream on the main straight to catch and pass, before Alyx got by again on the way into turn 2 with a better run through the first corner. On the final lap she managed to pull out enough of a gap to prevent the driver getting a tow to the finish line and took the chequered flag in third place.

A delayed start to the race day and an extended lunch break meant all the remaining finals were reduced from 15 laps to just 8. Lining up in third place, Alyx was up to second by the first corner before dropping back to fourth later in the lap. By the half way point she began to reel in the third place driver, but despite putting in faster laps she ran out of time to close the gap by the end of the shortened race.

The first year student from Gael Choláiste Chill Dara retains her third place position in the Championship on 163 points, just 11 behind the leaders, who are tied on 174, as the season moves on to Athboy in Co. Meath on April 29th