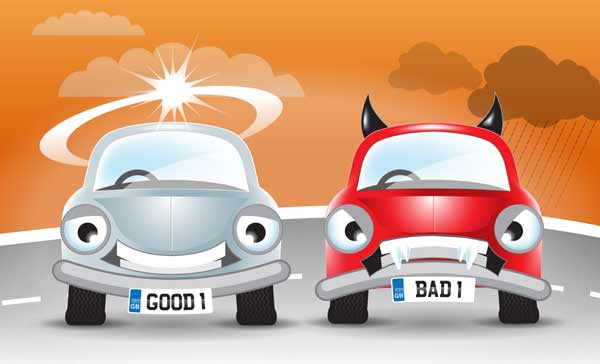 The drop in new car sales over the past few years has created a shortage of good second hand cars. But with a bit of time and research the savvy car buyer can still drive away with a good deal. Here are 12 used cars we recommend, that you should be able to find for around €9,000.

With the arrival of Dacia to the Irish market it’s possible to get an almost new car for less than 9k. The base model Sandero will set you back just under €10,000 new so you should be able to pick up an ex-demo model for less than €9,000 with a 4 year warranty and that new car smell but remember it’s a budget car so you won’t get many gadgets thrown in. Safety wise it’s got a 4 star NCAP rating and the diesel engine will give you 74mpg.

Volkswagen’s Up (2012) won’t impress you with acceleration but it’s an ideal city car. The 1.0l engine is available with 73bhp and costs just €190 to tax and comes in both 3 door and 5 door options. Inside it is typical Volkswagen and the boot is surprisingly spacious. Also consider the Seat Mii and Skoda Citigo which are basically the same cars underneath.

For a little more space, it would be worthwhile taking a look at a Hyundai i20 (2011). The i20 replaced the Getz but is a huge improvement on its predecessor with solid build quality and smooth engines. Available with a good choice of petrol and diesel engines the entry level 1.2l petrol returns 54mpg and will cost you €200 a year to tax.  There’s also an automatic gearbox available with the 1.4 petrol.

If what you’re looking for is a small car with big character the Fiat 500 (2010) could be your perfect match. Retro looks inside and out, it is spacious upfront but it is a little too cosy in the back. Outside of the standard trim levels there is a huge range of options and accessories available but keep an eye out for features such as a panoramic sunroof and parking sensors. It’s an ideal city car and with seven airbags and a five star NCAP adult occupant rating there’s no need to fret about safety. The most common engine is the 69bhp 1.2l petrol which will do 55mpg.

Honda Civics may have been the boy racer car of choice for some time but the 1.3l Civic Hybrid (2009) costs just €190/year to tax and can do 61mpg. Like a Toyota Prius, the Civic uses an electric motor along with a petrol engine but the Honda is much better looking. However, the hybrid doesn’t handle as well as a normal Civic and feels underpowered overtaking but it’s spacious inside with plenty of room for three in the back. Luggage space is a little sparse due to the batteries in the boot.

A (2008) Citroen C4 Grand Picasso is a family friendly option for under €9,000. The most economical engine is the 1.6HDi (51mpg and €390/year road tax) but it won’t win any performance awards. Overall the C4 comes with plenty of luggage space, loads of extras, a panoramic windscreen giving great visibility and is comfortable to drive.

Want the driving dynamics of a hatchback but with a bit more space? The Volvo V50 Estate (2008) is a good compromise between a practical family car and something that’s designed for driving. The boot can extend from 417 to 1,307 litres by folding down the back seats and the interior is finished to a very high standard. There is an extensive range of engines available but for economy choose a DRIVe model in 1.6l diesel (113bhp) and for performance go with the 2.5l T5 (220bhp). Look out for the super stylish R-Design model.

If you plan on tackling some rough terrain the Land Rover Discovery (2007) should be top of your shopping list. The 188bhp 2.7 diesel engine does 30mpg and despite its size it corners easily at higher speeds. Off-road is where the Discovery is most comfortable and the air suspension ensures easy changes to ride height along with the ability to alter settings to suit different terrains.

For a saloon with executive options the Lexus GS300 (2006) is very well equipped and comes with a 3.0l petrol engine that will do 0-100km in 7.2 seconds. The GS430 comes with an even bigger and faster 4.3l petrol engine and the GS450 is a more economical hybrid version that does 35mpg with its 3.5l engine but pre 2008 models will cost €1,809 to tax. There is no diesel option available but these cars are designed for covering long distances comfortably and quickly with effortless acceleration.

Buyers of a large family car with good economy may want to consider the Opel Insignia 160bhp 2.0l CDTi (2009 – €390 road tax) or a Skoda Superb (2009). The Superb is available in a range of diesel engines including the 105bhp 1.9TDi (50mpg) and a 170bhp common rail 2.0l TDi (61mpg). The 3.6 V6 4×4 Petrol may not be the most practical but it would be my choice. Despite its size the Skoda feels quite nippy and easy to manoeuvre, has an innovative boot that opens like a saloon and also like a hatch to squeeze in larger items and keep an eye out for a model with the parking assist option.

If looking for a big car with a luxurious feel then Chrysler’s 300C saloon is very hard to beat. An executive car with all the trimmings, a Chrysler 300C (2006) is very well equipped and the 3.0l diesel is relatively economical when compared to the 250bhp V6 and 340bhp V8 petrol engines. American cars don’t usually cope well on Irish roads but the suspension on this Chrysler was developed in conjunction with Mercedes Benz (along with the V6 engine) so it doesn’t feel like a boat on the road – which might be explained by the fact that the 300C is actually built in Austria.

For sheer driving thrills consider a low mileage Subaru Impreza WRX (2007) with a 227bhp turbocharged 2.5l engine. If you need a bit more muscle under the bonnet the 276bhp WRX STi has unrivalled handling capabilities and is the one to keep your inner rally driver happy.

Remember to consider running costs along with the initial purchase price – It’s important to work out an estimate of fuel consumption along with road tax, insurance and maintenance costs to ensure you’re buying a car you can actually afford to drive. Always do a history/finance check and ask a trusted mechanic to look at the car before handing over any cash. Keep in mind that if a car is too cheap there’s probably a reason why

A version of this article, by the author, appeared in the Sunday Independent

Buying a Small Economical Car for €8,000