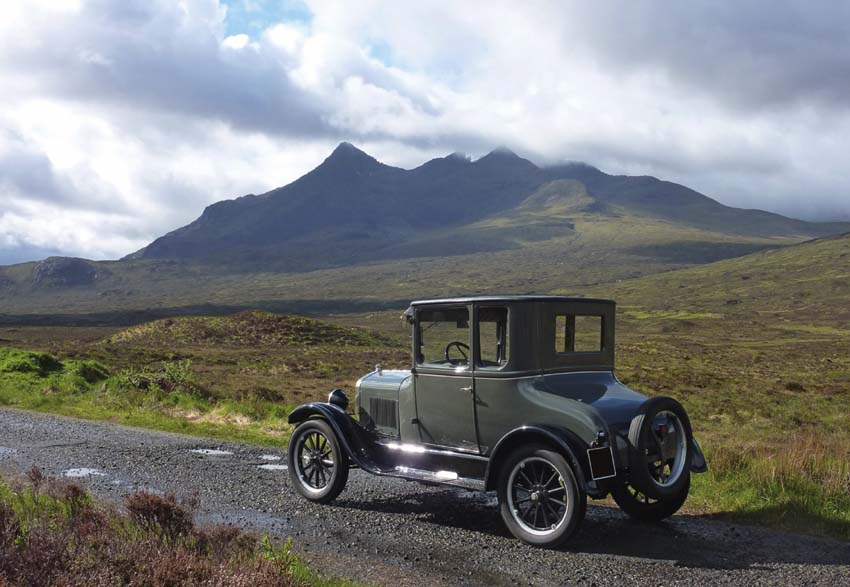 Henry Ford once railed against early attempts to control the pollution coming from the exhaust of his Model T. When his car became popular enough that traffic became a problem Ford found himself facing baffling questions about something called emissions. They want the air coming out the back to be cleaner than the air going in he fumed. That said, Henry Ford was a poster-boy of sustainability. The floors of his cars were made using the wood from boxes that carried other components. The Model T was capable of running on Kerosene or Ethanol and it was almost completely recyclable. What is more the Model T meant the streets were no longer full of horse manure and a few rudimentary tools could keep the thing chugging away for years.

Model T
That said, 93 years after the last Model T ran off the line the electric car may finally be getting its revenge on internal combustion because in the early days it was a battle between gasoline and electric power. Electric cars have been around in some form since the 1890’s and had major advantages over their early gasoline or steam rivals. Whereas your 1908 Model T required vigorous and perilous cranking to get the 2.9-litre engine running the Detroit Electric required a flick of a switch. It was popular with urban doctors who wanted a car that was reliable and easy to operate and it was also popular for its smoothness and quietness when compared to rattily backfiring gasoline driven machines. Clara Ford, Henry’s wife, had several Detroit Electrics and apparently preferred them to her husband’s own products. 20mph flat out and 80 mile range was plenty for most uses although both paled next to early fuel burning machines. Improved gas engines, the Great Depression and World War 2 finished the company off after 13,000 quiet, clean cars had been built.

1963 Clean Air Act
The United States after the war was a very different place from the rest of the world. Petrol rationing lasted in some European countries into the sixties but in America the V8 engines ascendancy had begun and fuel was cheaper than milk and even more plentiful. Against this background European and Japanese cars were small to spare a scarce resource whereas American cars had morphed into multi-cylinder chrome monuments to excess. The 1956 Suez crisis had threatened oil shipments and was a taste of things to come but it was the 1963 US Clean Air Act that really started to give car makers headaches, especially the 1965 Motor Vehicle Air Pollution Act which aimed regulations straight at car makers. US manufacturers lobbied the US Government to change its mind but then along came Honda, the cleverest of the Japanese car makers, with their CVCC engine. The Compound Vortex Controller Combustion engine beat the standards without resorting to the expensive and power sapping catalytic converter. Fuel injection would see off the CVCC engine but the point was made and emissions could be reduced without having to reinvent the wheel.

The Oil Shocks of the Seventies
Two oil shocks in the seventies saw everyone, including Americans, cram into smaller cars but by the eighties research on reducing emissions effectively stalled. Ever-increasing emissions targets came and we by and large met which saw fuel injection and catalytic converters become commonplace while leaded petrol was gradually phased out from the mid-1980s. The tide was gradually changing though and there was one company who saw a demand for greener cars before everyone else and had to cash to do something; Toyota.
Introduced in 1997, the first Toyota Prius was the first mass-produced hybrid vehicle and from 2000 was the first such model sold globally. For better or worse the Prius would become a cultural icon and will probably be recalled by future generations in the same way the VW Beetle recalls the sixties hippie movement. The combination of small lean-burning petrol engine, electronically control gearbox and supplementary battery power was something of a breakthrough. Hybrid technology had been around for years but nobody seriously tried to put it into production. Indeed, it took the might of Toyota a decade to do it and they lost money on every first generation Prius they sold.
From here the slow crawl towards an oil-free future began to turn into a gallop. Breaking technological ground was Honda’s thing so in response they also began to produce hybrid models with their emphasis on light weight.

EV1
Bizarrely, while the American car industry was staggering from one crisis to the next it was General Motors that emerged with their EV1, a powerful, oddly shaped fully electric car. Offered for lease to US customers the EV1 had 90 mile range, Golf GTI levels of acceleration and the typical smooth running characteristics of an electric car. Politics pushed back against the electric car, so much so that a film was made about the EV1’s demise, and GM took back and crushed almost all the EV1s despite owners pleading to be allowed to keep them. GM had the technology and the product to revolutionise car transport two decades ago and they literally squashed it.

Zero Emission Future
Despite the shenanigans behind the scenes it seems that the internal combustion engine was living on borrowed time. Tesla was founded in 2003 and made its name using a Lotus Elise chassis mated to 240hp electric motor thereby dispelling the notion that zero emissions means zero fun. In 2010 Nissan rolled out the Leaf which was an attractive, well finished, spacious family car that was also fully electric. Dieselgate rammed another nail in the coffin of fossil fuels and certainly did nothing for the sale of oil burners but arguably it was the 2012 Tesla Model S that really reinforced the idea of a zero-emission future. Here was a very fast, very expensive and very desirable car that happened to be electric.
Very few makers now offer a range that doesn’t include a hybrid and soon every maker worth their salt will have at least one electric car while petrol and diesel driven vehicles are due to be phased out within a decade. Turns out that Clara Ford was even more ahead of the times than Henry.