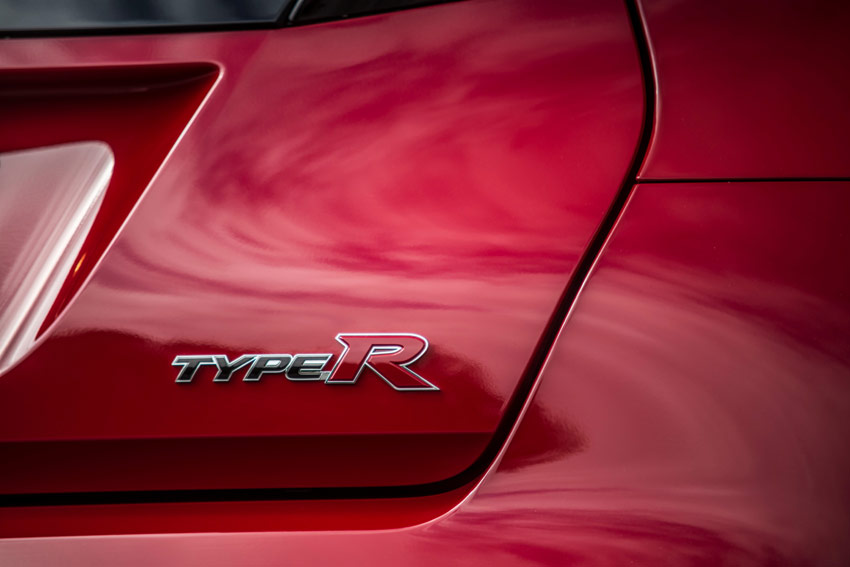 What is it?  The new Honda Civic Type R is powered by the most extreme and high-performing engine in the model’s history and it is also the fastest-accelerating front-wheel-drive car on the market.

Who is it aimed at? Honda is a company synonymous with reliability, well-built quality and engineering, but every once in a while it produces a car that reminds us just how incredible a car it can build if it really wants to. And it is a much-needed reminder, because Honda’s performance heritage was in danger of being forgotten forever. It has been five years since the last Type R and twice that since the NSX.

Styling? On my typical school run, other parents have become immune to my endless stream of new cars. The brand-new registration plates, the garish Press car colours and even the occasional Bentley do little to arouse any interest and I can count on one hand cars that have really caused a stir. But when I pulled up in the Type R, the amount of attention lavished on this car was remarkable. From the admiring stares from petrol-heads who know performance cars to the crowds that gathered to take photos and videos, slipping in and out of the Type R unnoticed was impossible. 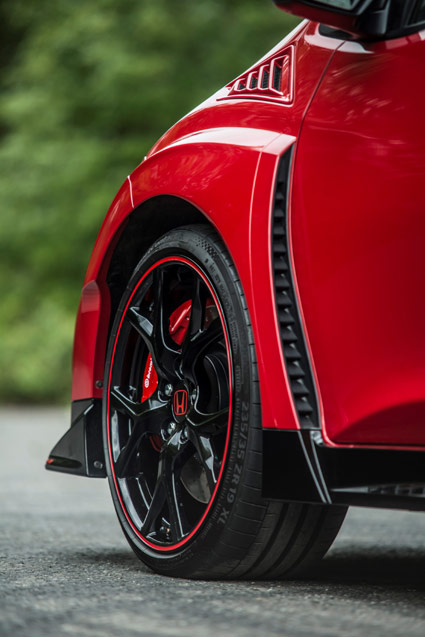 Visually, there is nothing subtle about this super-hot Civic and it screams for attention. Honda is keen to stress that all the exterior elements perform a specific function – from the quad exhausts to the enormous spoiler – but it all just makes it look like a pimped-up ride. Our test car’s colour, Milano Red, only accentuated this look.

Under the Bonnet?  Power comes from a turbocharged 2.0 litre  petrol engine, with 310 bhp  and 400Nm of pulling power – both higher than for any previous Honda Civic Type R model. It will go from standstill to 100kmh in just 5.7 seconds and reach a top speed of 270 kmh, both are incredibly impressive figures for a hatchback. What is even more impressive about this car is that all that power goes to the front wheels, but by some incredible feat of engineering, the Type R never feels compromised.

What about inside?  Inside, the racing bucket seats wrap themselves around you and they are beautifully bolstered. Overall, the cabin is nicely distinguished from the regular Civic but Honda’s new android infotainment system is fiddly to use. On the downside, the rear visibility is just as bad as in the regular Civic, but thankfully the Type R does come with a rear camera as standard. The practicality of a regular Civic is retained. There is plenty of room for all, although space in the back is a little tight. There is also a really decent-sized boot but Honda’s ‘Magic Seats’ were sacrificed to save weight.

On the Road? It is also incredibly involving and amazingly quick; it feels like it could become airborne at any stage. The six-speed gearbox is super slick and the grip is phenomenal. And if all this is not enough, press the R+ button that increases chassis and engine response and it becomes performance-focused. Reassuringly, the brakes are super-responsive but, as expected, it is very rigid on the road and unforgiving over anything other than a smooth surface.

And Safety & Options Our test car came with the GT spec that costs an additional €2,200 over the entry price of €48,750 and adds signature red highlights to the front and rear splitters and inside includes front and rear parking sensors, dynamic safety pack, red-line styling pack, high-power audio system, automatic lights and wipers, dual-zone climate control and Garmin navigation system. 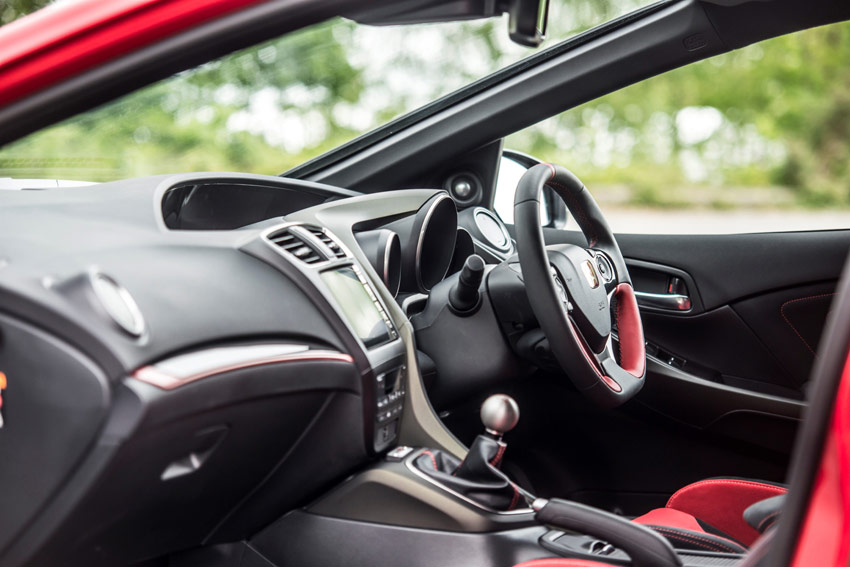 Verdict? The Honda Civic Type R is a fantastic car. It is composed, practical, fast and yet still smile-inducing fun. But be warned when you step on the accelerator it is harsh and the ride is very firm. So while the school run was more thrilling than usual, I don’t think the kids shared in quite as much pleasure. Then again, I was having so much fun I didn’t hear the “are-we-there-yets?”

Why you won’t? Harsh ride; styling

A New Honda Civic from €249 per month