Is it time to get taxis out of bus lanes?

Home » Features » Is it time to get taxis out of bus lanes? 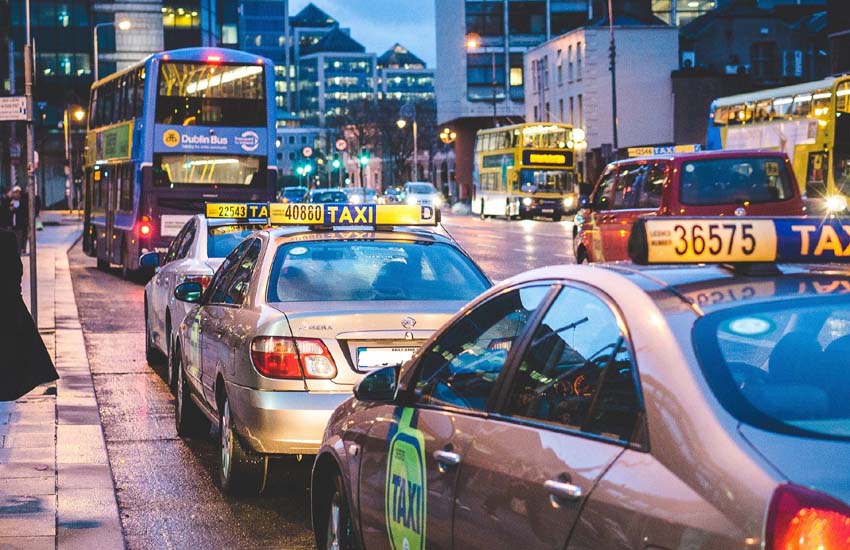 Taxis are no more efficient than other cars, so why should they use bus lanes in our cities, asks Geraldine Herbert

The recently revised Bus Connects plan further prioritises buses over cars, proposing more restrictions and limited road space to reduce reliance on private cars as a commuting option. The National Transport Authority (NTA) maintains that this will deliver improved journey times and so will move more people from their car and onto the bus.

But motorists will need convincing that the benefits of such a plan outweigh the downsides. Fast and reliable journey times will have to be a reality when the service is rolled out. So is it now time to reconsider taxi access to bus lanes?

For nearly four decades taxis have been using bus lanes. Following a two-month experiment in 1984, access to bus lanes was granted to the 1,900 or so taxis operating in the city at the time.

AA Director of Consumer Affairs, Conor Faughnan believes that while the presence of taxis in bus lanes does add pressure, they are also a useful way of ensuring that unused capacity is filled.

This sentiment is echoed by the taxi company Free Now who maintain that taxis incentivise passengers to leave their private cars at home, thereby reducing carbon emissions.

According to Vincent Kearns, chief executive of Xpert Taxis, and a former vice-president of the National Taxi Drivers Union, the use of bus lanes by taxis is there to facilitate the customer, not the driver.

Efficient use of road space

But not everyone is convinced. For Kevin Carter, chairperson of the Dublin Commuter Coalition, the key to solving congestion is making the most efficient use of road space. Two taxis take up the same amount of scarce road space as one bus but whereas a bus could carry up to 90 people, the two taxis are most likely carrying just one passenger each.

“Pinch points and heavy traffic areas are not improved by filling up bus lanes with taxis, buses must follow their routes but taxis can divert to avoid traffic,” explains Carter.  Congestion not only worsens air quality, but it also wastes time and fuel and directly impacts on bus journey times. Any increase is likely to see a decrease in bus passenger numbers and a corresponding increase in the numbers returning to their cars.

But it is not simply about congestion, taxis and bicycles sharing bus lane space raise the issue of safety for cyclists, concerns shared by Kevin Carter.

“Bus drivers are trained to safely navigate around a cyclist in a bus lane and Dublin Bus has initiated further cyclist awareness in their company through the use of VR and by approaching cycling groups to develop a conversation about how the space buses and cyclists share can be used by all safely. No such training and awareness is given to taxi drivers,” explains Carter.

Recent findings from the Road Safety Authority on cycling injuries concludes that urban roads are extremely dangerous places for cyclists as 87pc of all cycling injuries occur on these roads. In contrast, our cities are safe spaces for car drivers, instead, it is rural roads that pose the greatest risk to them accounting for almost 80pc of all fatalities.

Kieran Ryan, of the Dublin Cycling Campaign, a voluntary group advocating to make Dublin a better city for cycling, believes that sharing a traffic lane with any motor vehicle means increased risk for the cyclist.

Dublin is a low-density urban sprawl and the city’s transport problems are best served by bus solutions, rather than Metros, and more Luas lines. For this reason, the NTA is projecting an investment of over €2bn into the Bus Connects project.

With this level of investment, every effort must be made to ensure that it delivers and to support this, buses must be given the highest level of priority on the city’s roads and streets, even if that means taking hard decisions to exclude certain vehicles which currently use bus lanes including taxis and tourist buses.

Apart from being a more efficient use of space, dedicated bus-only lanes may also act as a deterrent against private cars slipping in and out of them.

Effective design removing filter lanes that encroach on bus lanes to exclude unauthorised users from the bus lane must be included and supported by enforcement through the use of permanent CCTV that ensures the blanket issue of on-the-spot fines and penalty points to all offenders.

But are dedicated bus-only lanes something that might be considered in the future? A spokesperson for the NTA said that “There are no plans under Bus Connects to exclude taxis from bus lanes. However, as bus use increases in the future, there may be particular corridors where the reliability of the bus system would be compromised by the volume of taxis sharing the bus lane. In such cases, the exclusion of taxis from that particular bus lane would have to be considered, either for certain hours or on a full-time basis.”

Any attempt to limit taxi access to bus lanes would inevitably provoke protests as taxis serve a useful and important function, particularly for elderly people and those with mobility problems. Without bus lane access, taxi drivers will be forced to take longer routes and this, in turn, could lead to increased fares for passengers. But taxi journeys are also about comfort, convenience and flexibility, all of which do not require bus lane access.

Despite the best efforts of transport planners, even when cities expand the quality and quantity of public transport, it does not guarantee a significant reduction in private car usage. Therefore anything that undermines the bus services’ reliability and effectiveness will reduce the attractiveness of the transport mode.

As cities move to greener transport, we should be encouraging and rewarding sustainable transport. Allocating access to buses only would shorten bus journey times, making them an attractive option so passenger numbers would increase and essential car users, including taxi drivers, could get around faster because of the reduced traffic on the road. It would also ensure a more efficient use of space and create less pollution. Removal of taxi access in bus lanes and introducing dedicated lanes and city centre priority exclusively for buses, maybe an ambitious proposal but isn’t it about time cities reimagined their relationship with all cars including taxis.

So what do you think? Is it time to take taxis out of bus lanes? Leave a comment below

A version of this article first appeared in the Sunday Independent

What we can learn from Oslo

Baby You Can Drive My Car; Car sharing alternatives