Is this the perfect car advert?

Home » Features » Is this the perfect car advert? 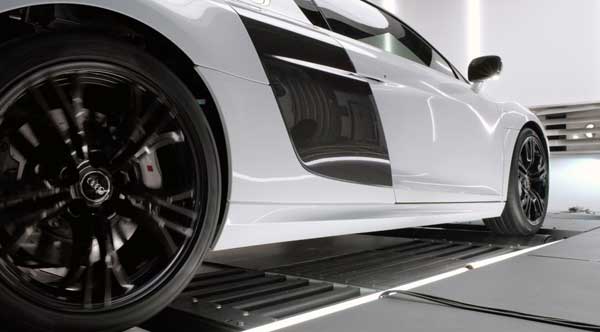 This week we look at  the new Audi R8 advert and explains why we think it has all the ingredients to be the most perfect car advert ever.

It’s not often that I devote a whole piece on Wheels For Women to a car advert.  But I really felt that I had to say something about the one for the new Audi R8 V10 plus.A few weeks ago I was watching Location, Location, Location on Channel  4, lost in a world of add-value potential and dual aspect, when my property show-induced semi-meditative state was shattered during the ad break by a gleaming white Audi R8 on my TV screen which sounded like it was about to take off into orbit.

Car adverts usually focus on the visual charm of the car and feature very happy, good-looking people driving the car while a narrator tells us how fabulous it is.

The Audi R8 advert is different because the engine is the star in this one. It’s not every day that you see a 550bhp V10 engine at work.

As the camera moves along the sculpted body from front to back exposing the ten cylinder rear mounted engine, the engine note gets distinctly more baritone. And then the engine bursts into life and goes a bit wild as the R8 moves up through the gears and reaches a crescendo. The way that gearbox shifts gear and the accompanying noise is pure magic! It even spits fire.

The weirdest thing is that the car is not hurtling down a racetrack during this grand display of power. It’s fixed to one of those conveyor belt type things that those in the know call a ‘rolling ramp’, used to measure the power output of a car.

This advert is perfect in its simplicity. There is no need for gimmicks or a narrator telling us how good it is. Showing the engine at work by removing the rear panels and letting the engine speak for itself is pure genius. It works incredibly well for a car lauded for its power and performance.

Can a Car Replace a Partner?