Home » Diary of a Racing Driver » Jennifer Mullan at Kirkistown

After her success in  Mondello Park, Jennifer was off north to Kirkistown for Round 8 of the MicksGarage.com Formula Sheane championship

It doesn’t feel so long since my last update but since then I have been to Kirkistown in Co.Down for round 8 of the MicksGarage.com Formula Sheane championship. I was really looking forward to getting back to the track where the season started to see how my pace would be considering the vast improvements I had made at Mondello Park recently.

We arrived up to Kirkistown at around midnight on Thursday after driving through every weather condition other than snow on the way. When we woke on Friday morning we were greeted with glorious sunshine despite reports on the radio of the nearby town of Newtownards suffering from flash flooding. Testing got underway at 11.30 and it was quite quickly clear that all was not well in the SaySo.ie / MobileReady.ie Formula Sheane. I was suffering with brake problems. The team spent the day trying everything possible to solve the problem with what parts we had available to us. The last session was the best for me and I found a little bit of pace but not as much as I needed. I was confident that going into qualifying if the problem didn’t return I should be able to pull a good time out of the bag and qualify well for the race.

Paul, Nathan and Barry headed off to scrutiny on Friday evening with the cars while I was nominated to cook up a BBQ for the team, this was followed by a trip to the bar as is tradition at Kirkistown. One or two sociable drinks were had and the laughs continued into the small hours before returning to the truck for some sleep ahead of race day. Staying at the track had its pros and cons. I got to stay tucked up in bed while the team got up to finish prepping the cars but this resulted in being the last one to the secretary’s office to sign-on after they came looking for me. I was just too comfortable to get up, this seemed to be an acceptable excuse for my late arrival to Wendy at sign on, so all was good. 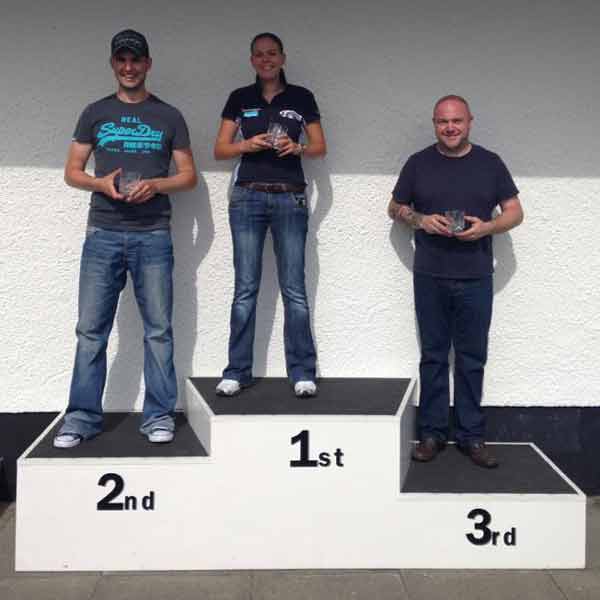 A heavy sea mist rolled in across the circuit just as qualifying got underway for the classes before us and this caused proceedings to halt temporarily. It thankfully didn’t stay and it wasn’t long before I was sitting in assembly ready to head out. I had a new set of brake pads in the front of the car so I needed to take it easy for a few laps to run them in but unfortunately buy the time I had done this I had lost pretty much all feeling in the pedal, our problem had returned. I just continued trying to improve my times as much as possible as I knew qualifying wasn’t as important due to some of the class regulars being missing this weekend. What I didn’t realise was just how much of a chance I was in with of winning the scholarship class this weekend until afterwards. I lined up P10 on the grid and P2 in class in the end.

We only had one race scheduled at this event so this left plenty of time to tackle the issues and do our best to cure them for the race with the limited resources we had available. We managed to get the fronts back working again and I was fully focused on getting one of my lightening quick starts off the line, taking the class lead and hopefully staying there for the duration of the race and taking maximum points home.

It’s not very often you can plan a race but if ever I needed one to come together this was it. I dropped the clutch as the lights went out and I think I probably got my best start to date in Formula Sheane. I found myself on the outside going towards the flat out left hand kink, Debtors fighting for sixth or seventh place. I reckoned I wasn’t going to survive out there and I backed out of the move before risking running onto the grass knowing that I wasn’t going to achieve anything by taking the chance as the people in my class were all behind me at this stage. A mistake for one of the front runners going into the first right hander, Colonial sent him spinning across the track and collecting a few other drivers with a few more having to take avoiding action. I was in the right place at the right time and found myself coming out of the corner in fifth position with a comfortable gap behind. After a few laps I was caught and passed by the recovering car of Kevin Sheane. A few laps later the dreaded brake problem raised its head again, at least this time it held off for half the race. This lead to another one of the recovering drivers, Richie Kearney catching me pretty quickly. We had a good battle for a lap or two but when we were heading into debtors side by side I backed out of it as I could see my nearest class competitor closing so I wanted to try and manage the gap to him and take home maximum points rather than slow myself up battling. With three laps to go I had zero front brakes and the rear tyres were starting to go off and slide a little. Steven O’Keeffe was closing fast and every time I came out of the hairpin I was praying the last lap board would be out. Eventually it was shown and with a couple of car lengths to spare I was hopeful I could hold on. Despite almost running out onto the grass coming out of the chicane I was in the lead of the class heading down the back straight. I took no risks at the last corner, came off the power really early, glued it to the inside line with Steven right on my gearbox at this point. I managed to get on the power nice and early and get a good drive out of the corner to have enough of a gap to celebrate while passing my team on the pit wall and cross the line for my first scholarship class win and my best ever race finish in sixth position. To say I was delighted was an understatement.

With a month’s gap to the next two rounds of the championship back at Kirkistown we have loads of time to get to the bottom of the issues I had this weekend and hopefully pull off a repeat performance next time out.

As ever none of this would be possible without the hard work of my team FCR Media Racing, my team mate Barry Rabbitt who had terrible luck this weekend but will be back fighting at the next event and of course my sponsors, www.SaySo.ie, www.MobileReady.ie, www.goldenpages.ie, www.wheelsforwomen.ie, www.motorsport.ie and Thomas J. Graham Sand & Gravel. Special thanks must also go to Richie O’Mahony and Luke O’Hara for their help this weekend.