Home » Diary of a Racing Driver » Jennifer Mullan at Mondello 45 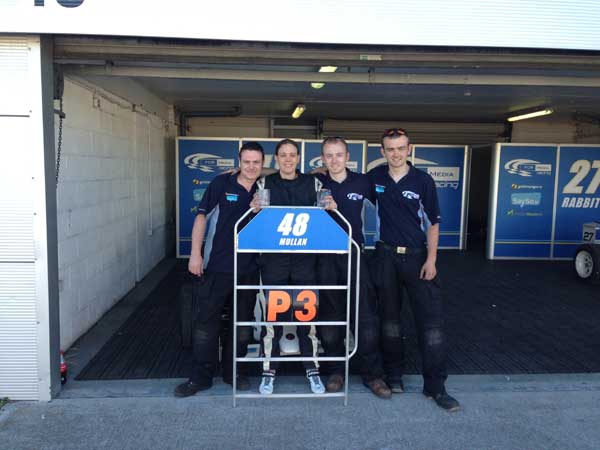 Following her success at Cultra, Jennifer Mullan was back in her Formula Sheane at Mondello 45

After a great result at Cultra last weekend it was on to rounds four and five of the MicksGarage.com Formula Sheane championship, brimming with confidence. This would be the first race weekend of three at Mondello Park this year for us and after the mechanical problem we suffered in testing just over a week ago I was keen to get some decent laps under my belt. The weather forecast was like something you would expect when racing in Spain not Co.Kildare and for a change it wasn’t wrong. The sunshine greeted us on Saturday morning ahead of the full days testing. It quickly became apparent that my recent bad luck seemed to have moved on and in just two sessions I had beaten my personal best time round the Mondello Park national track by 1.2 seconds. The weather got warmer as the day went on and the track temperature was also rising making conditions difficult and preventing me from improving my times any further. I was delighted with what I had achieved as we were finally moving in the right direction.

Mondello Park was celebrating its 45thanniversary this weekend so there was a great buzz around the paddock on Sunday morning and once again the sun had come out to play. I don’t think I can remember the last time I was as nervous as I was ahead of qualifying. I think it was because I was worried that I might not be able to produce the same times that I had the previous day but once I rolled out of the pit lane that was all forgotten and I set about the job of doing my best in the www.SaySo.ie/MobileReady.ie car. With the track being so warm it was going to be crucial to manage my tyres and with a few tips from my team mate I was hopeful I could do this. After only a few laps I was back down to lapping as quick as the previous day and managed to better my personal best time by a further 0.2 seconds. My lap timer on the car had my ideal time being a further 0.6 seconds faster had I managed to piece together all my fastest sectors in one lap but I seemed to come across spinning cars or traffic any time it was looking like I was going to improve. I lined up P10 in a field of 14 cars in the end, my best qualifying performance to date in Formula Sheane.

One thing I seem to have mastered in Formula Sheane is getting the car off the line and Race one was to be no different to previous meetings. I got a great start getting up to P8 rounding the first corner and still on the tail of the lead pack. I dropped back to ninth at turn two but a spinning car at the second last corner had me back up to eighth again. I was then locked into a great battle with Aidan Byrne. We were running second and third in the Scholarship Championship. Aidan was all over the back of my car but I managed to cover every possible overtaking opportunity and coming out of the second last corner in the middle of the race, Aidan spun allowing me to take a deep breath and set about keeping up my pace as the earlier first lap spinner Gary Corcoran was back going and catching me fast. I couldn’t hold him off unfortunately but I still came home P9 overall and P3 in the scholarship championship grabbing my second podium in a week and my first ever circuit racing podium. To say I was delighted was an understatement, my luck had finally turned.

Race two was a little less dramatic, another good start from tenth had me past a few people off the line but the car in front of me missed a gear and it was either take to the grass or lift off the power for a split second, I chose the latter and lost all momentum I had but still managed to hold my starting position. I started to fall back a little from the pack and it was looking like it might be a lonely race. I was having a problem locking wheels under braking so after a quick adjustment of the bias I started reeling in the hard battling Aidan Byrne and Eoin Crowley up ahead. I had a feeling something might happen between them and sure enough after a few laps the two made contact at turn one allowing me to get past Eoin but not Aidan. I had worked out I was once again running third in the scholarship class with Aidan right in front of me and Eoin right on my gearbox trying to pounce. This was all new to me, I had never been in a position where I had to try attack and defend at the same time. I was determined to be going home with another podium so defended like my life depended on it. Fortunately after a few laps of clean, close racing Eoin spun behind me and I could focus all my attention on trying to get my hands on that second place. Finding myself in Aidan’s position from race 1, I tried everything to get past him but he did a fantastic job of closing the door every time I had a look. I got a great run out of the last corner and crossed the line just 0.169 seconds unfortunately behind him and secured my second podium of the weekend in P3 and P8 overall.

By far this was my most successful weekend racing since I started back in 2007 and I hope I can continue to improve to thank everyone who has put so much effort into getting me on track and sticking with me when things weren’t going so well. Our next weekend is back on Mondello’s national track on July 6/7 so here is hoping I can pick up where I left off and move up a step or two on the podium!

All that’s left to say is a huge thanks to my team FCR Media Racing and my sponsors www.SaySo.ie, www.MobileReady.ie, www.goldenpages.ie, www.wheelsforwomen.ie, www.motorsport.ie and Thomas J. Graham Sand & Gravel for their continued support.