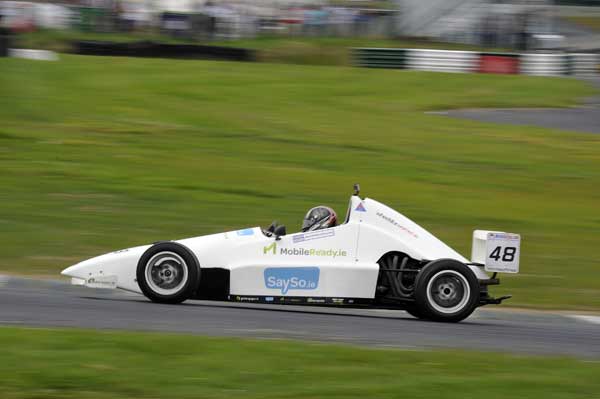 It was back to Mondello Park for rounds six and seven of the Micksgarage.com Formula Sheane Championship after a month’s break for me and the wheelsforwomen.ie supported Formula Sheane. Last time out I had my strongest weekend to date since joining the class last year. I should have been going into this weekend full of confidence but a test day last Saturday left me very nervous, as I couldn’t get within half a second of the lap times I had been doing previously.

It was back to the workshop afterwards to give the SaySo.ie/MobileReady.ie car some TLC before the race weekend test day. This appeared to work as straight away on Friday morning the car felt so much better and almost instantly I was back down to matching my personal best times from before and to my amazement when I glanced at my lap timer I had finally lapped Mondello in under 60 seconds, my aim since I started in Formula Sheane. I spent the rest of the day trying to do it again but I just got slower as did the track conditions.

Saturday would see us qualify and have one race with the second race on Sunday afternoon. We lined up in Paddock assembly ahead of qualifying in the scorching sunshine. There were quite a lot of cars there before me and as we rolled out of pit lane I was very keen to get a clear piece of track and try put in some quick laps before the tyres over heated, so I went on a mission passing about three cars on the first lap.  On lap six, seven and eight I managed to lap under the minute and put myself ninth overall and second in the scholarship class on the grid for both races, another personal best for me. 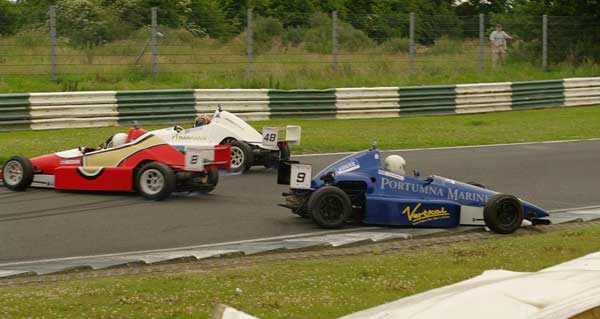 Race one wasn’t until late afternoon so there was plenty time to soak up some sun and enjoy the atmosphere that the Formula Vee festival seems to bring each year to Mondello Park. It was still very hot by the time our race came around and I was hopeful of a great race after such a strong qualifying. It all went to plan at the start getting off the line reasonably well and holding my position for the first few laps on the back of the main train. Unfortunately on lap three I clipped a kerb on the way into turn 3 and it sent me spinning on to the grass and down to 14 and last place from ninth. I’m not one to give up though so I set about chasing everyone down to see what I could do about getting my hands on another podium. I haven’t had much experience passing others in a race but I certainly learnt very quickly and by lap eleven I was back up to ninth overall. I crossed the line in eighth place and third in class taking another podium finish. Little did I know that my team mate Barry Rabbit had crossed the line in first place, taking a very well deserved maiden win in single-seater cars and the teams first race win in only our fourth event racing against much more experienced teams.

Knowing that if I hadn’t of made the mistake on lap three of the previous days race that there was a good chance I could have taken second in class I was keen to try and do this in race two. I didn’t get a good start for once and for the first time I got loads of wheel spin off the line. I quickly grabbed third gear and set after the guys in front, holding my position. However on lap three coming round turn two I had to lift off the power to avoid the spinning car of David Parks and in doing this the back of my car went light and sent me into a synchronised spin with Aidan Byrne towards the barriers. I stopped almost less than an inch from the wall, dropped to second gear and got back onto the track to once again try and regain all the spots I had just lost finding myself in pretty much last place.  Over the course of the next five laps I managed to pick off pretty much a car every lap, mostly under breaking into turn one and the odd dummy. I was back up to ninth overall and third in class with 6 laps to go, there was quite a big gap to the car in front but I managed to reel him in by doing four sub 60 second laps in a row and a drag race along the main straight saw me shoot down the inside of the Mondello Park become a racing driver car under breaking. I was back to my starting position in class and eighth overall but this was to be short lived as coming into the esses the back of the car came around on me and my hard work was un done. I couldn’t believe it, I had driven my heart out but yet I was left stricken in the middle of the track and the car wouldn’t restart for what felt like an age. Eventually I got going again but had lost two places. However mechanical issues for Rob King in the Micksgarage.com car on the main straight promoted me back to third in class and despite another little mishap at turn three I crossed the line for my fourth podium in a row and promoted myself to third in the Scholarship championship based on my calculations.

It was the best weekend to date for my team FCR Media Racing with Barry also bringing home another podium finishing second and being the highest points scorer of the weekend meaning we had four podiums in the two races.

Next for me is a trip back up north to Kirkistown in Co.Down in just three weeks where I will be hoping to try out a different step on the podium. Until then I would like to just thank everyone who dropped by the garage over the weekend to say hi and wish us well, my team who had my car running great all weekend and of course a huge thanks to my sponsors without whom none of this would be possible www.SaySo.ie, www.MobileReady.ie, www.goldenpages.ie, www.wheelsforwomen.ie, www.motorsport.ie and Thomas J. Graham Sand & Gravel.