Home » Diary of a Racing Driver » Jennifer Mullan Back At Kirkistown

Jennifer was off north once again to Kirkistown for Round 9 & 10 of the MicksGarage.com Formula Sheane championship

It has seemed like an age since my last update but we had about a month of a brake in the calendar before heading back to Kirkistown in Co.Down again for the penultimate meeting of the year for us, rounds 9 & 10 of the MicksGarage.com Formula Sheane Championship. Originally we were only to have one race at this event but with the recent announcement that Formula Sheane would once again be racing for the famous Leinster Trophy at the final event of the year, the class decided to bring forward one of the championship rounds to avoid having three races in the one weekend at Mondello Park.

My team worked tirelessly over the brake to fix the problems with my car that I spoke about in my previous blog and I was hopeful that I would be able to pull off some good results after taking my maiden class win last time out. Friday testing got underway and before long I was complaining of braking issues in the car again. This left the team scratching their heads as pretty much every part that could be changed was changed before the event. We continued the day trying a few more things before asking my team mate Barry to drive the car and see if it was something I was doing wrong. He confirmed that there was a major problem with the car and we set about changing more parts around. He also reported that there appeared to be a bit of a misfire in the engine. I went out for the last session to try the changes that were made and as I rolled out the pit lane I could hear a knocking noise from the engine and my heart sank, I knew it wasn’t good.

When I got back into the paddock we brought the car over to David Sheane who builds the cars and he confirmed that if topping the oil level up didn’t fix the problem that it was more than likely that our engine had cried no more. David has done his fair bit over the years to get me racing and to keep me racing and this time was no different. He happened to have a spare car with him at this event and offered me the use of it for the weekend. To say I was extremely grateful was an understatement as two non scores in the championship would have been a disaster.

The team worked like Trojans late into the night and changed over a few bits from my own car and turned the spare car into the SaySo.ie/MobileReady.ie car for qualifying the next morning.  Nerves set in as normal when I woke up on Saturday morning but I figured it couldn’t be that hard to put in some good lap times even though I was getting into a different car than what I had tested in the day before. After just 2 laps in Qualifying I seemed to develop a brake problem in this car also. This hampered my progress and I ended up qualifying P13 for both races. Back in the pits the guys found a problem with the brakes so confidence was restored for the race and I could only go forward. 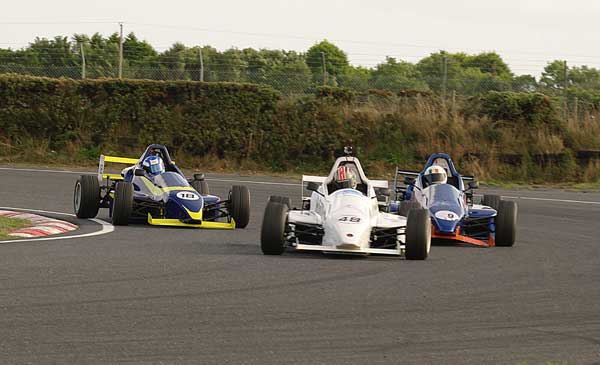 There wasn’t much time until the first race which was before lunch. I was hopeful of one of my good starts but not knowing the car I reckoned it was going to be difficult. When the lights went out I got a load of wheel spin but managed to still make up one spot. I went about piling on the pressure for eleventh place and after a lap Brendan Carr spun at Fishermans in front of me and I moved up another spot. After then I started to suffer with brake fade again so had to try everything I could to defend from Mick Sammon behind. Mick was applying serious pressure and spent several laps tucked in under my gearbox on the straights and trying to find away around the outside into every corner. Two laps from the end Mick put a wheel on the grass and spun on the way into Colonial while trying to get by me and I could then take a deep breath and coast it home to another class podium in P3 and P8 overall.

No one could find an explanation for my brake problems in the race so I went out in race two to try do the best I could again and to see if I could figure out if it was something that I was doing wrong to cause the problem. On the warm up lap I stayed away from heating the brakes as I normally would to see if I could get a bit longer out of them this time. A similar start as before would again see me only make up one spot but on the run into the hairpin I managed to out brake Mick and go around the outside of him to gain another place. For majority of the race I had to defend like I had never before with two lads hot on my heels trying everything they could to get past. There was no way I was giving up my podium run without a fight and I drove around on the inside line lap after lap trying to stop the lads on the apex of hairpin and drive away every time to try get a bit of a break on the long run down through debtors. This appeared to work most times and with a few laps to go I managed to pull away a little and bring it home once again P3 in class and P9 overall this time to make it seven podiums in a row.

It wasn’t the weekend I had hoped for but I have a lot to be thankful for as it could have been much worse and if you had of told me a few months ago I would be disappointed with 2 podiums in class I would have laughed. I have been very lucky with mechanical failures to date so I can’t really complain too much.

Once again I have to say a huge thanks to my team FCR Media Racing, my team mate Barry Rabbitt who had a weekend to forget but did learn to fly a Formula Sheane, my sponsors, www.SaySo.ie, www.MobileReady.ie, www.goldenpages.ie, www.wheelsforwomen.ie, www.motorsport.ie and Thomas J. Graham Sand & Gravel. Special thanks must also go to Richie O’Mahony, Shane & Liam Rabbitt, Luke O’Hara and last but not least David Sheane for all the help this weekend.