Jennifer Mullan competes for the 2016 Walter Hayes Trophy in Silverstone 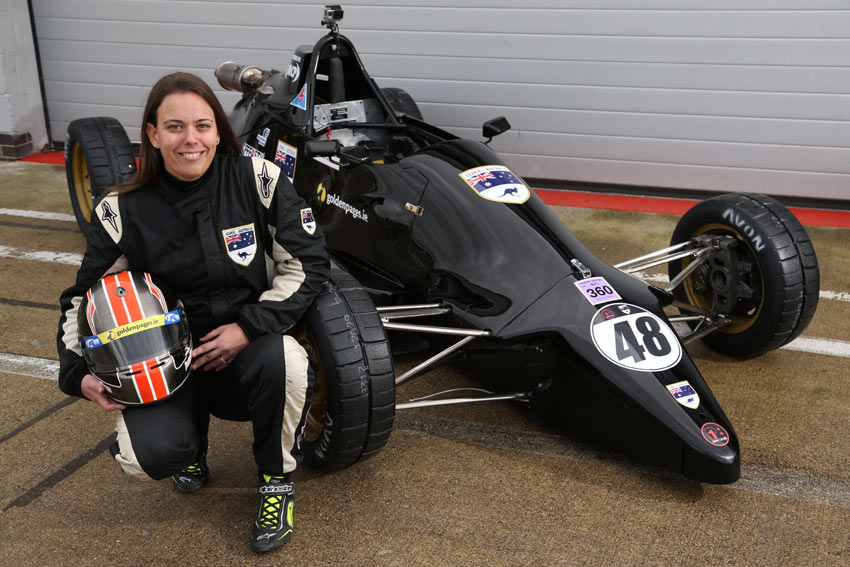 Things have been very quiet on track for me these last few months but off track it has been the total opposite, a new car, a new team and a new challenge! When I travelled to Australia back in March, at the time I had no fixed plan for 2016 in place, but a brief conversation around the breakfast table in Australia led to a Van Diemen RF89 Formula Ford arriving in our workshop a few months later. A partnership was formed with our race team P1 Racing and Ecurie Australie for us to run their car and for me to drive it. The car was in need of a lot of TLC so my other half Paul, undertook the task of stripping the car and cleaning it up. Given the time required to do this, the aim was to have the car ready for the Martin Donnelly Trophy in Kirkistown at the start of October but things outside of our control lead to the RF89’s debut being pushed out to the Walter Hayes Trophy in Silverstone at the beginning of November.

Just over a month ago, we finished the car the day before it needed to be loaded into the truck to head for Silverstone so we weren’t in a position to do any testing beforehand. This wasn’t ideal but fortunately for us there was an extra day’s pre event running at this year’s Walter Hayes Trophy so we decided to take the chance and travel over.

At this year’s event we teamed up with UK team Souley Motorsport so we got our car unloaded and hooked up with the team to get some testing done. Finally after many late nights and hard work, it was all about to be worthwhile. Since the Wednesday was an additional day’s testing, we were treating this as our shakedown and not really aiming to set any sort of decent lap times. However we were pleasantly surprised when the car didn’t really miss a beat all day and we ended the day just one second off my personal best laptime. Not a bad first day at all but it did seem a little too good to be true. Thursday and Friday’s testing didn’t go as well, we started to hit a few teething problems that we would have expected to see on the Wednesday. They were all small enough issues that we were able to fix without losing too much track time. However we didn’t seem to be improving my lap times which was frustrating.

We changed a few things on the car on Friday night ahead of qualifying and I was hoping we would find some more speed. Being in the fourth out of six heats meant I wasn’t on track first thing Saturday morning. I was very happy about this as the temperatures were freezing so it gave the track a little bit of a chance to grip up. Despite feeling like I drove quite well in qualifying my times were still not good in comparison to what I had done two years previous in my Reynard but we put this down to a combination of the track being a bit slow and a few other small things. I started the race on Saturday afternoon from 15th, knowing that if I could steal 14th I would get myself through to the last chance race on Sunday and avoid the progression race first thing on Sunday morning.

I got a pretty decent start but by the time we hit the back straight others were driving away from me and I knew I was still down on speed. I fought as hard as I could to stick with the pack but they best I could manage was a dog fight with another car for 15th place. I just about came out on top but this would see me have to compete in the progression race now. The team got to work on the car to try and see if they could figure out why we had no pace. Eventually we found a pretty big issue and it was quickly sorted for Sunday.

Starting the progression race from 10th I needed to finish in the top six to get through to the last chance race. I knew this wasn’t possible with so many of the top guys who had crashed out of their heat coming through from the back. My times during the race were good enough for a 13th place finish but unfortunately when I was passing someone up the inside into Copse corner I spun. With the track being so cold, there was very little grip and I just got caught out. I ended up crossing the line in 21st, gutted with myself as I knew this would mean I would be starting very close to the back of the Historic final gird but on the other hand, this time last year I was sitting in the medical centre so it wasn’t all bad.

I dusted myself off and knew I could come through the field given the chance in the historic final. Starting 33rd on the 35 car grid was not ideal but it was all about being careful and picking off each person in front one at a time. About 20 minutes before the race the heavens opened for the first time all weekend. I absolutely hate racing in the rain as I never really go well, especially in the rain at Silverstone. I was yet to drive my new car in the wet either so it was going to be a fun race. Sat in paddock assembly it was lashing rain and sleet, it was freezing. I actually had 2 sets of fireproof undergear on under my race suit just to try stay warm. My mechanic, Jess took off her coat while I was sitting there to cover me up as I was shivering in the car, that’s when you know you hired the right person for the weekend! 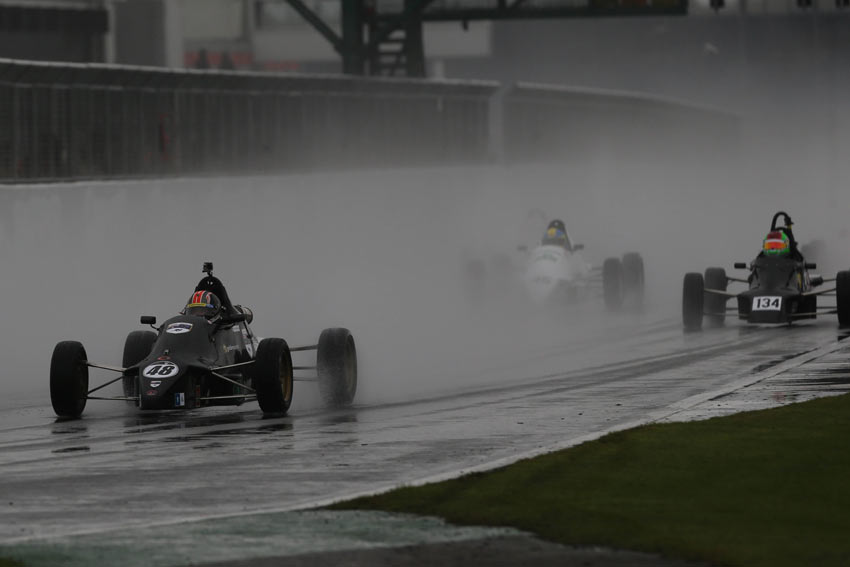 The race got underway in what can only be descried as horrendous conditions, not helped by how much spray there was in front of me due to being so far down the gird. I didn’t get the worst start but on the run to the first corner I couldn’t actually see if I was on the track, grass or where the corner even was. Everyone slowed and we made it around safely. I thought my visor was fogged up so I flicked it open and realised that it wasn’t, visibility was just that bad. When I made it as far as the back straight after avoiding the odd spinning car, I wasn’t even able to go full throttle as I couldn’t see how close I was to the car in front. A few people actually decided to retire from the race as they felt it was just too dangerous. I just plodded on and quickly realised that my new RF89 appeared to handle quite well in the wet and I knew if I could get through the race without spinning I would pick up a few places. Despite driving like a granny going to the shops, I started to see I was faster than those ahead and carefully set about passing them. By the cheqeured flag I had managed to come from 33rd to 19th place with a lap time quick enough for around 16th. I was delighted with that, not bad for someone that feels that they can’t drive in the wet.

That was it, the Walter Hayes 2016 was done and I had made it through without a scratch on the car thankfully. It had been a weekend of highs and lows so it was great to end it on a positive note. To go to Silverstone with a car that literally hadn’t turned a wheel beforehand and to finish every race was an achievement in itself. I had hoped to get some better results along the way but it just wasn’t to be.

I can’t thank the Davision / Greig family enough for the opportunity to stay doing what I love, Paul for all the hard work rebuilding the car, Jess and the Souley Motorsport team for working like Trojans all weekend for me.

The focus now turns to another trip to Australia in March before planning what events we do next year with the Van Diemen. There are some very exacting times ahead!