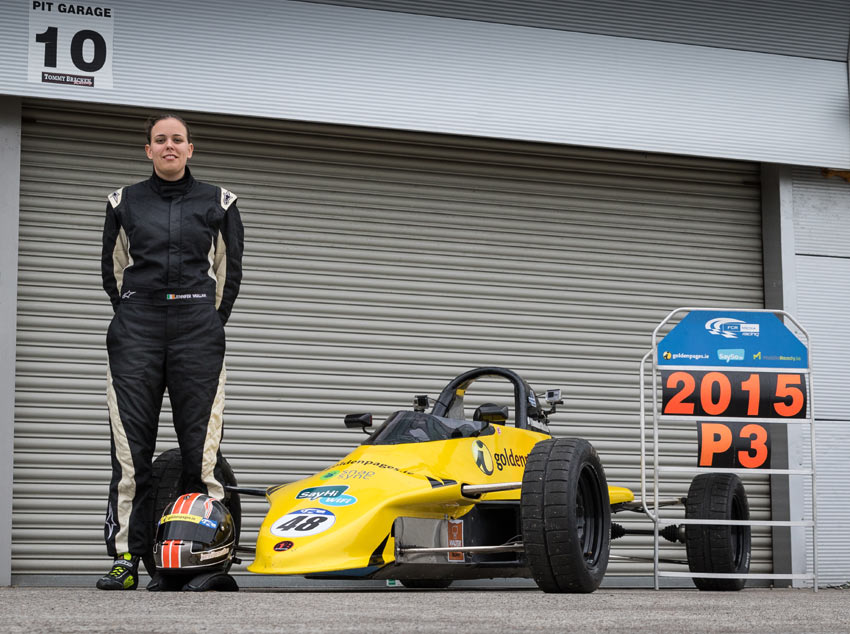 Having been on a bit of a roll at the last two events, I was pretty confident going to Mondello Park last weekend, despite the international layout being my least favourite track of the year. Little did I know my strong performances at Kirkistown and the previous Mondello event would leave me in such a strong position in the All Ireland Formula Ford Championship. When I got a copy of the points before the event, I couldn’t believe my eyes when I saw I was actually sitting third in the overall Championship as well as being first in the Pre-87 class. There was a small chance that I could slip back to fourth overall but I only needed to score a small few points to secure third with my rivals requiring quite a lot to over haul me.

The weekend got off to a disastrous start when my car developed an electrical problem in the first run out in testing. Despite the best efforts of the team, it took the majority of the day to track the problem down and finally get rid of it. I managed to get out in the last session of the day with the car back on full song, but unfortunately bad luck struck again and on the run down to turns 7a and 7b, the fastest part of the track, a rose joint holding on my bottom wishbone snapped under braking, scary biscuits! I was lucky to have a big gravel trap right in front of me and I was able to just hold the car straight and let it grind to a halt in there. No major harm was done and we worked late into Friday night to get the car all brand new again for Saturday’s qualifying and two races.

Qualifying didn’t really go to plan, as I was somewhat off the pace I had even set at last year’s Leinster Trophy event. I was a bit baffled about the lack of grip I had but it would appear that most other drivers were suffering the same issue. I put my car eighth on the grid for the day’s two races just 0.04 seconds off seventh and first in the Pre-87 class.

Before I knew it I was getting back in the car for race one with no time to do anything in between. I got a pretty decent start as usual in race one, however being on the outside of the grid I couldn’t get my car to the inside rounding the first corner so I ended up slipping back ninth. After a lap I got up the inside of fellow Pre-87 runner Ivor Mairs at turn two and we set about a hard battle over the next few laps. While attempting a late move around my outside at the last corner, Ivor went off into the gravel and I was able to cross the line in fifth due to the demise of some of the other runners ahead. Most importantly though, I had scored enough points to secure that third place overall in the championship and take the Pre-87 class crown. Race two was a little less dramatic; I built a gap on Ivor at the start and had a pretty lonely race from there earning the first place Pre-87 trophy again for my efforts.

With the All Ireland Championship now complete, Sunday was all about the prestigious Leinster Trophy. Straight away in qualifying, my car felt a lot better than it had the day before, despite us not changing anything over night. So I can only assume the track conditions had improved. I went over a second quicker than the previous day but it was still only good enough for ninth on the grid. Knowing I didn’t have much chance to win the Leinster Trophy, the day was all about enjoying myself and entertaining all the guests we had with us from FCR Media and goldenpages.ie.

There was a large gap between qualifying and the race, so plenty of time was spent chatting with my guests, doing an interview in our hospitality suite and then bringing all the guys down for a look around our garage and my FF84 Reynard. I was delighted that so many came and it was great to show everyone what we had achieved all year with their support. Briefly before the race, the heavens opened and there was no sign of it letting up anytime soon. This meant only one thing, a very wet race!

Anyone who reads my blogs regularly will know I’m not a big fan of racing in the wet, but I wasn’t feeling quite as put off about it as normal as I did quite well in Kirkistown when it rained a few weeks previous. As soon as we set off on our warm up lap, I knew I was in for a whole different experience.  I could tell straight away that I had very little grip. I made it as far as the third corner before spinning off, much to my embarrassment. I got going again and caught up with the pack as they were just lining up on the grid. Despite getting a pretty decent start, I couldn’t see anything heading for the first corner in the spray so I fell back a bit from the pack. The drama was only beginning however. I must have spun off at turn three around three or four times during the race, eventually I managed to do a proper job and parked the car in the gravel trap with around two laps to go and sadly that was it, game over. It was the toughest conditions I have ever driven in, until that point I never knew what flat out, fourth gear wheel spin was, I certainly do now!

Having sat down since the weekend and looked at our budget, unfortunately it is going to be touch and go whether we are able to make the trip up to Kirkistown next weekend to compete in one of the Formula Ford highlight events of the year in Ireland, the Martin Donnelly Trophy, but we haven’t given up yet so fingers crossed we can sort something. We are also now focusing on doing our best to try and secure the budget for the two blue ribbon events in the UK at the end of October, the Formula Ford Festival at Brands Hatch and the Walter Hayes Trophy at Silverstone. If anyone would like to be part of this exciting journey, please feel free to get in touch. Until then however, watch this space!

I couldn’t have asked for a better season here at home. There’s no getting away from the fact that Formula Ford numbers have been down this year but getting that third overall and the Pre-87 class championship crown certainly didn’t come easy at times and I am very grateful to those who made it possible, my team FCR Media Racing and my sponsors, goldenpages.ie, www.SayHiWifi.ie & WIFI and Snap Sync and wheelsforwomen.ie