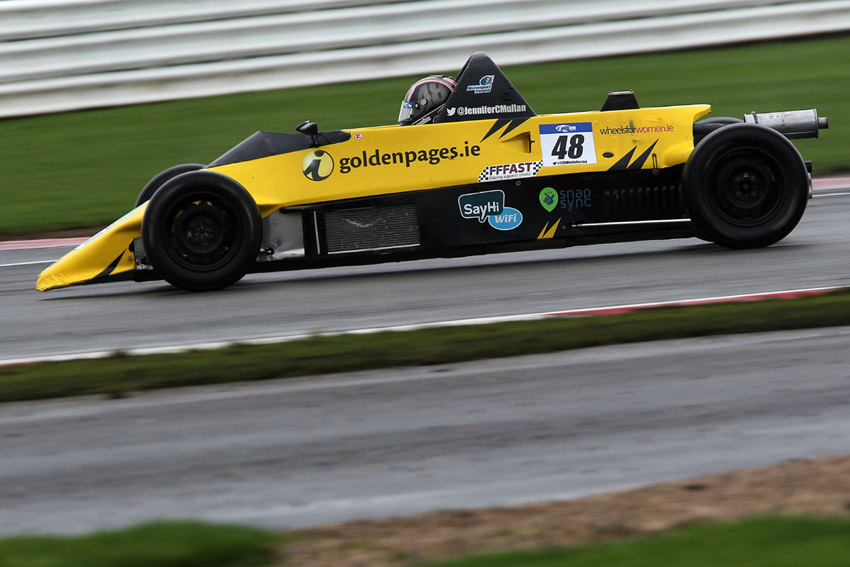 The end of season Formula Ford trophy events are always a very exciting time of year. With the Leinster Trophy and the Martin Donnelly Trophy done and dusted, all that was left was the Brands Hatch Formula Ford Festival and the Walter Hayes Trophy in Silverstone. Unfortunately I didn’t have the budget to race at Brands Hatch, but I already had the flights and hotel booked so I headed over anyway for the week to have a bit of fun and to help look after all the guys on the FCR Media Racing team. In between events there was just time for a quick two day trip home to re-pack my bag before catching a flight last Wednesday evening to Silverstone where I would be competing.

I was blown away last year by the Walter Hayes Trophy, it was all a bit surreal from start to finish. I couldn’t quite get my head around the fact that little old me was racing somewhere as famous as Silverstone. With that out of my system in 2014, I was more ready than ever for this year’s event.

The weather forecast in the days leading up to the event was predicting rain for the two days of testing and then dry weather for the rest of the weekend. Sure enough, Thursday morning greeted us with a wet track and conditions just continued to worsen into the following day. We knew that testing now wasn’t going to be much use to us for this weekend but it was an ideal opportunity for me to get some much needed wet running under my belt. At one point on the Thursday, I went out and completed two laps before parking it in the pits as it was just too dangerous with oil down and the rain, I didn’t want to be the cause of the numerous red flags that were being flown. By the end of Friday though I was starting to get more comfortable and I was enjoying the conditions a little more which should stand to me in the future.

Being drawn in heat one for the event meant I was out first every morning, including for my qualifying on Saturday morning. Despite having not rained since Friday afternoon, the track was still pretty wet but I had saved a new set of tyres for the weekend. We bolted them on and off I went. After a lap or two I couldn’t get over the difference the tyres made to the car, by the end of the session I had made a massive step forward and put myself 14th on the grid for the race. A bit of a hairy moment coming out of the last corner on the last lap for sure cost me 13th, but I didn’t mind too much, I was more relieved I didn’t end up spinning down the main straight!

My race was scheduled for around midday which meant I could get it out of the way and relax watching the others for the rest of the day. I was determined to maintain my 14th place and qualify straight through to the Last chance race and avoid the early Sunday morning progression race I had to do last year. Despite falling back to 16th during the opening laps, I battled hard and fought my way back to 14th in the end, mission accomplished! I had rewarded the team with a nice lie in and a late start on Sunday!

When I woke on Sunday morning I felt really good heading into the day, the sun was splitting the trees and it was now dry at the track. Everything was shaping up to go my way! My grid position for last chance race wasn’t great due to my heat being the slowest as the track was still wet on Saturday but I knew I could make up a good bit of ground once I found my feet in the dry. I was expecting to initially fall back a few places off the start due to some quicker guys coming through from the back that qualified from the progression race, but I wasn’t going to let that bother me. Sure enough the opening lap saw that happen but I stayed calm and focused on the guys in front of me, some of whom I could tell I had the measure of. Starting the second lap of the race I was keen to get moving so I lined myself up in the slip stream coming down the Wellington straight for a move up the inside under braking into Brooklands. That all went to plan until I committed to the corner, everyone in front of me scattered and as I realised the reason for this was that there was a car spun and stopped across the track, it was too late, I tried to keep my steering turned hard left but the guy I was overtaking cut in to avoid the stopped car and clipped my front wheel, sending me straight out to the right and head on into the stranded car.

It was by far the hardest hit I’ve ever had since starting racing, but I got away very light with just a sore hand and neck thanks to all the safety equipment we are required to wear. I know over the years there has been great debate as to the necessity of HANS devices, but I think it’s pretty safe to say I most likely wouldn’t have walked to the medical car so easily afterwards had it not been for it. My head shot forward quite violently but the HANS really did its job and I had nothing more than a stiff neck the next morning. I can’t thank all the marshals and medical staff at Silverstone enough for looking after me so well.

My poor goldenpages.ie car didn’t fare out so well however, and the damage was unrepairable at the track so that was my weekend over. My aim of improving on last year’s result in the historic final would escape for this year but it leaves me with unfinished business and makes me determined to get back there next year for another go!

It’s very easy to forget what a great year I’ve had when it ends on such a bad note, but if you had told me I would win the All Ireland Pre-87 championship and finish 3rd  overall in the main Championship at the start of the year, I would have probably laughed at you. I learned so much this year and my confidence has grown massively which can only be a positive if I am lucky enough to be given the opportunity to race again next season.

I guess that’s now a wrap for 2015 but over the course of the next week watch this space as I have a pretty cool adventure coming up in 2016 that I will be sharing with you all! For now though all that left to say are a few words of thanks, starting with my fantastic sponsors www.goldenpages.ie,  www.SaySo.ie and Snap Sync. My team FCR Media Racing and my family and friends for all their support. Last but not least all you guys that log on to read my post weekend ramblings on wheelsforwomen.ie. Congratulations to Ger and everyone behind the scenes at www.wheelsforwomen.ie. on their recent victory in the Blog Awards!