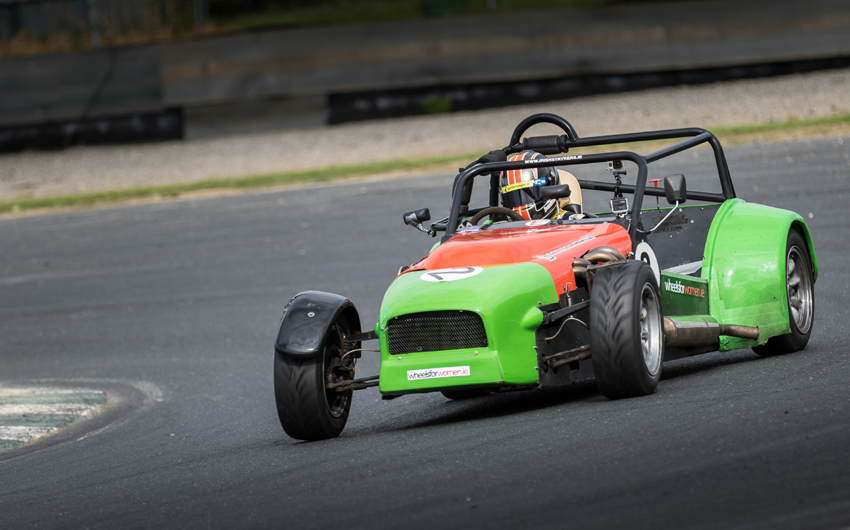 Jennifer Mullan in the wheelsforwomen car.
Pic by Brian Walsh

With a three month break in the Irish Formula Ford calendar from May to August, I was delighted when Geraldine from wheelsforwomen.ie asked me would I be interested in a guest drive with the Baker Automotive Ltd Irish Strykers class, needless to say she didn’t have to ask twice! I made a brief appearance back in 2009 for a couple of one off events but I couldn’t really remember much about driving the cars other than I really enjoyed it back then.

Due to the pretty full line up of races scheduled at Mondello Park for the weekend, they were running some qualifying and racing on Saturday afternoon which meant there would only be testing on Saturday morning. I knew it was going to take me a bit of time to get used to driving the Stryker, especially around the long International track layout so I was keen to make the most of the morning. I jumped in the car for a few short laps just to get a feel for it early on and it became clear very quickly that I was going to have to take any Formula Ford knowledge I had and throw it to one side for the weekend and take a totally different approach to how I was going to drive the car. With such a short test day I only got around two or three runs but it was enough to knock decent chunks off my early lap times ahead of the afternoon’s qualifying.

Over the lunch break we got the car up on to the scales to check how I was for the class weight limit and set the corner weights. It turned out I was 20kg under the limit so we set about bolting weights and anything else heavy we could find to the car so I would be the legal weight going out for qualifying. I was hopeful all the extra weight would perhaps help the traction issues I was having with the rear of the car but it didn’t really make much difference, the class are however making great strides towards curing this problem for all the drivers with the introduction of some possible upgrades next season to the cars. I further improved on my testing times in qualifying and managed to put myself tenth and ninth on the grid out of 12 cars for the following days two races. I was pretty happy with that and relieved that I had set a respectable enough time not to be last.

Both of Sunday’s races were scheduled for after lunch, which was a bit of pain having to wait all day, but I was really looking forward to getting back in the car to see if I could improve any further. The first race ended up to be a bit of a disaster. I spun off twice and lost too much time to catch back up but still managed to learn a bit more about driving the car ahead of the second race of the day and slightly improve on my qualifying times.

I had an absolute blast in race two! I managed to have a few battles on the way to brining the car home in fifth place and I only spun once this time which was an achievement in my opinion. My lap timer didn’t work so I had no idea what my pace was like. Despite the track becoming very slippy after some oil was put down early in the race, I still managed to again beat my best lap time by over a second, narrowly missing out on getting under the two minute bracket that I had been hoping for.

The Stryker class has gained a reputation around the paddock for their hospitality and their friendly nature and I have to say I couldn’t have been made feel more welcome. On track the racing is hard but fair and everyone is there to help each other out when they all get back to the paddock. I have definitely got the bug to do some more Stryker races in the future but first I think I may start lifting a few weights. The cars are quite a bit more physically demanding to drive than the Formula Ford and I could barley lift my arms on Sunday evening to eat my customary post race weekend Chinese takeaway!

I have to say a massive word of thanks to Mark Baker of Baker Automotive Ltd and his family, John Burke, Geraldine Herbert of wheelsforwomen.ie and all the drivers who gave me tips and help over the weekend, your all toppers!

If your reading this and thinking about perhaps going racing yourself then you could do a lot worse than look into this class. Cars are very reasonably priced and all the information you need to get involved is on www.irishstrykers.ie.