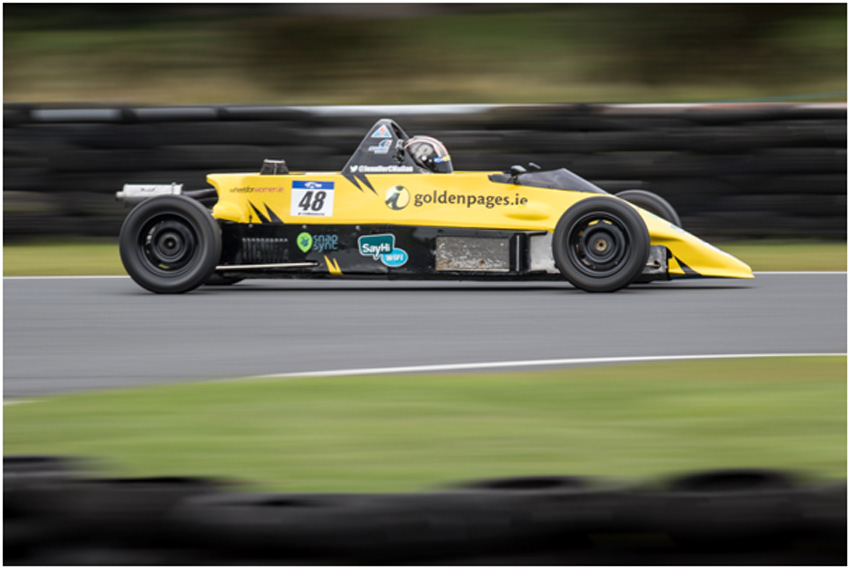 After the Leinster Trophy two weeks ago, I wasn’t quite sure what was next on the cards for me. At the time I realistically didn’t think I would make it to the Martin Donnelly Trophy race, as I was going to try and put all my efforts into making it to the Formula Ford Festival in Brands Hatch and the Walter Hayes Trophy in Silverstone. We sat down and went through the numbers and realised that we just weren’t going to be able to reach on doing both of the UK events. So to be able to give the Walter Hayes our best shot, building on last year we decided that it would be best to skip the festival this time round. This left me in a position where all of a sudden the Martin Donnelly Trophy wasn’t completely out of the question. I turned the piggy bank upside down and raided the back of the couch and put an entry in last Monday, but I wasn’t able stretch to do the normal pre event test the day before. Surprisingly I wasn’t actually too worried about that, after all it was only August since I was last there.

There was no hiding the fact that the last time out in Mondello Park I left feeling very low for the first time in a long time, the weekend hadn’t really gone to plan. After a day or two I shook myself off and was determined that all the hard work this year wasn’t going to be wasted and I went to Kirkistown feeling more relaxed and confident than I had been in a long time. I’m the sort of driver that tends to need a session or two in the car each weekend to get back up to speed. When I arrived at Kirkistown on Friday afternoon, I went out for a few laps at the back of a Formula Vee test session just to make sure the car was running ok ahead of qualifying the next morning. I didn’t get to push on but it got my head back into the game.

Such is the popularity of Formula Ford in Kirkistown, I lined up in a 23 car field for qualifying first thing on Saturday morning. I was a little nervous that I might struggle to get a clean lap but in actual fact it wasn’t too much of a problem. Initially it was busy as everyone sorted themselves out and there were a few yellow flags out around the track, but I got up to speed pretty quickly and could see from the signals on my pit board I was quite a bit ahead of the drivers I had bench marked myself against before the session. To my surprise, I could see on my lap timer that I was over half a second quicker than I had ever gone before. I was tempted to come in to the pits and sit out the rest of the session to save my car and tyres, but I was hungry to try and see could I get below the 64 second lap. I missed out by 0.062 of a second but I was still pretty happy, perhaps I should skip testing the day before more often!

Qualifying proved not to be too important as your grid slot for the Final would be decided from the finishing order of the two heats that were being run, combined. I seemed to get the short straw in the draw as most of the older cars were drawn in heat one and myself and one other in heat two with most of the front running newer cars. I just had to do the best I could as it was out of my control and see where we would end up. I started 11th and after an almighty race long battle with David Nicholl in a slightly newer 1989 Reynard, I came out on top in 10th. Unfortunately this left me starting 20th when the two heat results were combined, despite being massively quicker than five or six of the cars lining up in front of me.

I didn’t let this bother me too much as it is just the luck of the draw, it could very easily go my way next time. I knew if I could get off the line cleanly and not get caught up in any first corner drama that I could make my way back up to where I felt I should be in the pack.

My start wasn’t the worst in the world but was slightly hampered by one of the cars at the front of the grid getting a slow get away. I think I got past around two or three cars by the first corner and set about just trying to pick the rest off one by one. This plan was going great and by the end of lap two I had made my way up to second in the Pre-87 class and around 15th overall or so. I was pulling away from those behind and catching a battle in front of me before my car swapped ends on the way into Colonial. I was puzzled as to what had happened but when I watched my video back I think I just didn’t let the clutch out enough between gear changes, and when I went for second gear I hadn’t engaged third gear beforehand so I locked the back wheels and it sent me spinning into the scenery! I got the car back going again but all my hard work at the start was undone, I found myself down in 22nd and last. I didn’t panic and I just got my head down and set about catching as many people as I could to see could I rescue some sort of result and perhaps even a bit of crystal.

I started catching guys one by one and I made my way up the order. I got as far as 16th and fourth in the Pre-87 class before it was getting harder to close the gap. I kept at it and with around three laps to go I got up to third in class. I could see second placed driver Henry Campbell at the end of the straight coming to the end of the race but time ran out and I had to settle for 14th overall and third Pre-87. I was kicking myself afterwards about the mistake, but I had nothing to lose so I was right to push on and try to make as many places as possible in the race. I quickly forgot about the negatives when I recapped my day and sew the progress I had made with no testing or anything the day before. This was compounded when walking up the paddock everyone was complimenting me on how well I had gone and how much I had improved all year. One of the most enjoyable things about Kirkistown is that it’s not all about who finishes first, yes it does help but people there recognize and appreciate the individual battles all the way down the field just as much. It made me remember why I go racing, once you enjoy yourself that’s all that matters and if it entertains others along the way, then even better!

The weekend gone is just the confidence boost I need heading to Silverstone at the end of the month. I really enjoyed the Walter Hayes Trophy last year and I now have high hopes of improving on last year’s performance and ending a great year for me on a high. I can’t thank the guys at FCR Media Racing enough for turning out a great car for me at short notice last weekend and my sponsors goldenpages.ie, www.SayHiWifi.ie & WIFI and Snap Sync and wheelsforwomen.ie for their continued support!