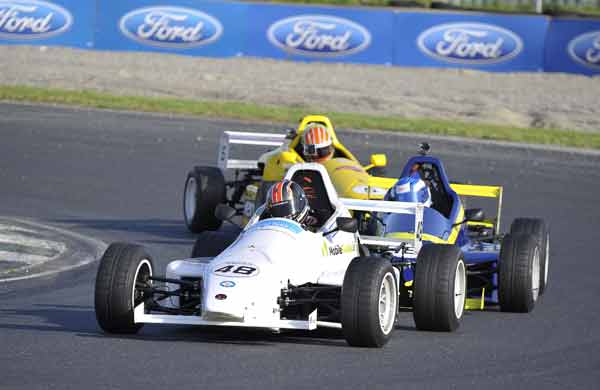 We catch up with Jennifer Mullan as she competes in the final round of the MicksGarage.com Formula Sheane Championship

I want to apologise in advance for the length of this blog, I have been a little busy, as you will see. I finished my last update unsure if my season was prematurely over due to an engine failure at the last event in Kirkistown. For anyone who follows me on Facebook or Twitter you will already know that due to the fantastic hard work from my team FCR Media racing and Sheane Cars I managed to make final event of the year last weekend, the Leinster Trophy. They managed to turn around an engine rebuild in a week to get me out testing on the Wednesday before the event.

Round 11 of the MicksGarage.com Formula Sheane Championship would be held on the international track layout at Mondello Park. Generally we only get to use this layout once a year so I always find it quite difficult to go well here so I was glad to hear of the extra testing available prior to the weekend. We picked up my engine on the Monday night and team boss Paul set about fitting it on Tuesday night and into the small hours of Wednesday morning while I went to see the film Rush in the cinema. What an amazing film that I highly recommend you to go see! We were greeted with rain when we arrived at the track but I didn’t mind too much as Sundays forecast was to be similar. All I was looking to achieve was to make sure that the car was running ok, anything else would be a bonus. Thankfully all was well and I even managed to fit in some much needed wet weather coaching from my team mate Barry who was setting really good times.

It was back to the day job on Thursday before some more testing on Friday. We stayed at the track on Thursday night in our race truck as it has a living area with beds etc. The weather on Friday morning was just what we had hoped for, dry. The guys set to work prepping the cars while I grabbed an extra few minutes in bed. After a session or two I was back in the swing of driving in the dry on the long track, my times were not great but I was expecting this, as I am not a fan of the long track. This weekend was going to be about doing the best I could but most importantly bringing the car home in one piece. As the day went on I managed to bring my times down to better my fastest time from last year so I was pretty happy as I could see from the data where I was loosing all the time to the front-runners.

Saturday would see us have one qualifying and one championship race. Sunday would also have the same format but the race would be non-championship and it will be an all out battle for the Leinster Trophy with the winner taking all! Our 15 minute qualifying got underway on a dry, sunny track but after just two laps the red flag was shown for a car in the barrier out on the back of the track. Red flags on the international track are a bit of a nightmare as the lap times are twice as long as the national track and you loose quite a bit of your session on the out lap from the pits. We got back running with seven minutes on the clock and when all was said and done I qualified P14 for the afternoons race.

My start in the race wasn’t too bad and I was battling with Aidain Byrne for third in class when one of the faster front runners, Robbie Allen who started at the back of the grid pulled a move around the outside of me on the way into turn four while at the same time I was trying to do the same to Aidan Byrne. I only saw Robbie at the last second when the gap for my car got very small and I was forced to back out before being sandwiched between the two. This caused me to run wide then and I lost another few positions. It was a pretty lonely race from there and when the red flags flew once again with three minutes left for a car stopped in the middle of the track the race was declared a result and I finished a disappointing P13 and P5 in class. The first time I have been off the class podium since June. On a more positive note I had done enough to secure second place in the final scholarship championship standings so I was over the moon about that. I had finished every race, taken seven podiums out of eleven races including my first win in Kirkistown in July. 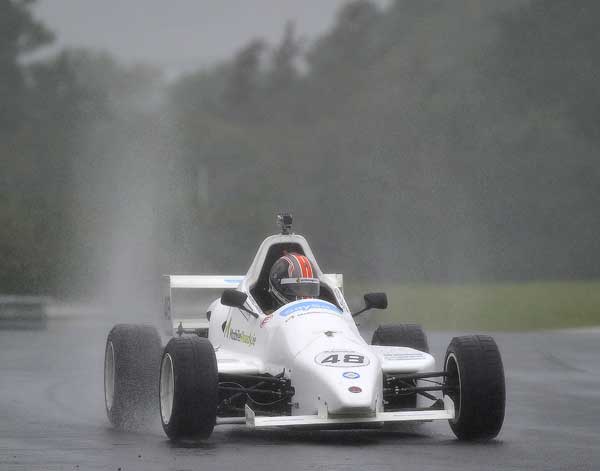 There wasn’t much time to celebrate as we still had the small matter of the Leinster Trophy race to be taken care of on Sunday. I was being realistic about my chances being pretty much non existent in this race but its great to be a part of it as many famous people have raced for and won the trophy before. My teammate Barry however stood a very strong chance of taking it home. Qualifying conditions were almost a carbon copy of 2012, very wet. The team put a wet set up on the SaySo.ie/MobileReady.ie car and then the rest was down to me to put to good use what I learnt on Wednesday. Conditions were awful but I set about steadily finding my way round, knowing that it was very important not to go off and to complete each lap. On my second lap I could tell from my timer I was on my best wet lap of the weekend and as I crossed the start finish line the red flags came out again but I had crossed the line in time for it to register and while sitting in the pits waiting for the session to restart my brother Nathan handed me my phone to check the live timing app so I could see where I was. I was sitting P12 out of 20 cars so I was delighted, as I knew I could go so much faster. We got back running with seven minutes reaming so I settled in to trying to improve my times further, with one lap to go I got a pit board to say I was P14 just 0.5 seconds off P13 so I got the head down and I managed to improve by a further two seconds but unfortunately so did others and I fell to P15 where I would start the race from.

I climbed into the car for the final time this year and instructed the team to let me know on the pit board how Barry was getting on in the race as I had my fingers and toes crossed that he would bring the trophy home. I got a mega start in the race and made up about four positions going towards the first corner but I got held up on the inside and everyone I had passed got back around the outside of me. I seemed to really struggle for pace in the first few laps of the race but I didn’t really care as I came out of the last corner on the first lap and saw on my board that Barry was in the lead. I was locked in a great battle with Brendan Carr, swapping position at different points on the track for a few laps. Eventually I managed to shake him off and go about setting some better lap times on my way to finishing P13. When I came out of the last corner for the final time the pit wall was empty and I had no idea where I had finished or more importantly where Barry had. When I pulled into parc ferme I was greeted with the sight of Barry hanging over the fence with people congratulating him. I couldn’t believe it he had done it! He had won the Leinster Trophy and his name has now joined the greats like Senna on it. The atmosphere was unlike anything I have ever experienced in Mondello Park and to be a part of it all was just mega. The party that followed on Sunday night was even better!

I’m going to wrap this up now as I’m sure your probably bored reading already. I just want to add that this year I managed to live out one of my dreams of competing in a full seasons racing for the first time, I think we managed in it style and its all thanks to the help of my fantastic sponsors www.SaySo.ie, www.MobileReady.ie, www.goldenpages.ie, www.wheelsforwomen.ie, www.motorsport.ie and Thomas J. Graham Sand & Gravel. Between my team FCR Media Racing and Barry Rabbitt they gave me all the best tools and knowledge there is out there to improve as a driver and I feel like I have progressed a huge amount over the course of the season and I really cant thank them all enough.

I hope its not too long until I’m talking to you all again, you never know what the winter might bring. I really hope to be on track in 2014 and as soon as I have any details on my plans you will all be the first to know!