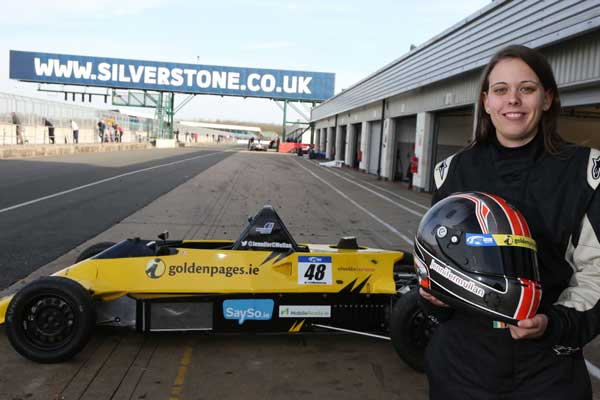 It wasn’t easy but we did it, we made it to the Walter Hayes Trophy in Silverstone last weekend. The fact that I just spent four days driving round Silverstone National circuit in my little goldenpages.ie Formula Ford still hasn’t really sunk in but it is an experience I will never forget. The journey began on Wednesday night when I took a flight to Birmingham after work with one of our mechanics, David to meet up with the rest of the team who were already at the track. We arrived at 1am and after dropping David off I headed to my hotel for a few hours’ sleep before having to be back at the track for 8am the next morning.

Thursday and Friday were both test days with three 30-minute sessions each day. Thursday was spent settling in and finding my feet. Our day was cut slightly short when the left front wheel bearing stud sheered on the run down to Beckets, resulting in me losing a wheel but no harm was done and the guys managed to put it all back together for Friday’s running. Another dry day on Friday was great and we kept getting quicker until I had just about finished off the set of tyres I was testing on, I had been using them since the Leinster Trophy so I started getting slower. The team switched me onto another set and I went out and put in my best time of the weekend by half a second in the last session and was catching and passing cars that I never thought would be possible. Between sessions on Friday I got the chance to do a fantastic photo shoot with one of the UK’s best motorsport photographers, Jakob Ebrey. The mega results of this can be found on my website www.jennifermullan.com. I was buzzing for the weekend leaving the track on Friday evening needless to say.

Before I go onto fill you in on the rest of my weekend I really want to tell you about a guy I met on Thursday, as it restored my faith in the fact there are still very nice people out there and perhaps you will feel the same. His name was Chris Davidson, he had come all the way from Australia supporting another Aussie driver, he took an interest in my car and what I was doing as he himself has some 1984 Reynard’s just like mine back home. Chris turned out to be one of the nicest and most generous people I have met at a race track. On Friday afternoon Chris offered to give me a set of tyres that his driver had only done 10 laps on and was finished with to help me out for the weekend. I couldn’t believe my luck, it was a major boost and it was such a nice thing to do. Chris recognised how hard I was trying and how well I was going and thought that with a bit more help I could go even better. I really can’t thank him enough, it meant an awful lot. 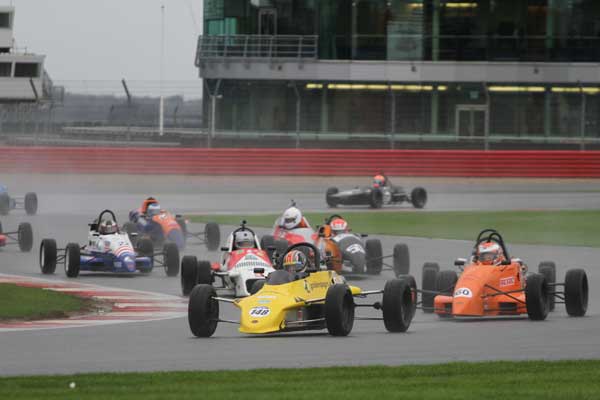 Back to the action! With qualifying and one race on Saturday I was gutted when I opened the curtains of my hotel room to see that it was wet. I don’t have much experience in these conditions and we only got one run on a wet oily track on Thursday morning. We bolted on my new tyres and off we went, I qualified 14th out of 18, which wasn’t too bad considering. I needed to finish 14th in the race to qualify straight to the last chance race the following day but I just missed out by finishing 15th meaning I had to take part in the progression race early on Sunday morning. I was gutted to say the least, as my lap times in the race were a second off what I had been doing in testing.

I had been pretty much starving myself for the best part of a month (well maybe that’s a bit of an exaggeration) but I certainly was watching what I was eating since Kirkistown to loose as much weight as possible for the Silverstone event. There is only a minimum weight limit on the car at this event, not the car plus driver as is the case here in Ireland, so it was off to my favorite Indian restaurant in Towcester with the team on Saturday night to cheer myself up.

Sunday morning was once again wet. I was starting in third place on the grid for the Progression race and needed a top six to get through to the last chance race. Had it been dry looking at the times I might have just scraped 6th place but as it was wet I ended up finishing 10th out of 26 cars. Dropping back sounds worse than it was as there were a good few top guys that had problems the day before that had to come from the back of the pack so I was happy enough as I could only realistically have gotten 9th I think had I done a little better. That left me just the Historic final in the afternoon to contest. Once again it was still wet and the session before hand had covered the wet line in oil the whole way around the track which was a nightmare but it was the same for everyone. I lined up 19th, got a mega start and found myself up to around 15th going to the second corner. That’s where the good news ended unfortunately, I spun there as I found myself on a really slippy bit of track and I got collected by another car, I was able to continue but it had damaged my steering so I spent the rest of the race with the steering wheel off to the right when I was going in a straight line. I fell to the back of the 26 car pack but quickly made my way back to 19th before going off again and then again later on! I had more spins in this race than a washing machine but I was just trying so hard. I ended up 20th at the end, which wasn’t good as I had the pace for around a top 12 or 15 but that’s how it goes I guess, we’ll put it down to experience!

It’s mad to think that the 2014 season is now over but what a season it was. I have had the privilege of working with some of the best people in the business and picked up a few trophies along the way so for my first season in Formula Ford I don’t think I did too bad! I really hope I get the chance to do it all again next year and put to good use what I learnt this season and if I’m really lucky I’d love to go back to Silverstone next year and battle it out again with the best formula ford drivers in the world.

Now the 2015 journey begins, watch this space and I’ll let you know how the winter unfolds! I’m going to stop rambling now and end by just saying a massive thanks to each and every person who helped make this year possible, every person who wished me well, my team FCR Media Racing and of course my fantastic sponsors www.goldenpages.ie, www.MobileReady.ie, www.SaySo.ie and www.wheelsforwomen.ie.