Jennifer Mullan looks back on 2017 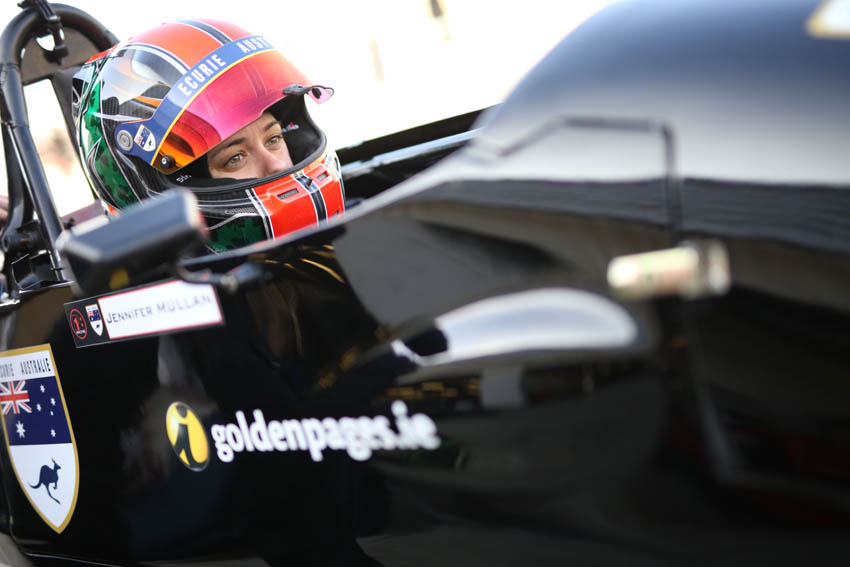 We catch up with Jennifer Mullan to reflect on 2017

2017 hasn’t been as busy for me as some previous years racing wise but I think it’s safe to say it was quality over quantity with the events we did do. Organising my wedding combined with being unwell for a few months during the summer really restricted our plans.

I started off this year just like last with a trip down to Australia. Once again I was piloting Chris Davison’s Reynard FF84 at the Phillip Island Classic. Last year this was an unbelievable experience that really exceeded my expectations both on and off the track. It was always going to be difficult to repeat this but we headed down under in March with high hopes. Unfortunately things didn’t go to plan on this occasion and I got caught up in someone else’s accident on the Saturday evening, with nowhere to go I was collected and the car was too badly damaged to continue for the rest of the weekend. This was unfortunate but that’s racing. On the plus side I got to enjoy the 30+ temperatures on the Sunday without being stuck in a three layer race suit and helmet.

My next outing was then in June when the British Formula Ford 1600 Championship came to our local circuit, Kirkistown. This track is a particular favourite of mine and I was looking forward to bringing our Ecurie Australie Van Diemen RF89 for a spin there. As this was only the cars second outing since we acquired it, we still had a few teething problems creep up that we had to work through. I struggled all weekend with braking problems which we later discovered was due to the quality of my brake pads deteriorating since the car was last run. It still turned out to be a productive weekend with lots learnt about the car.

Next on the agenda for the year was another return to Kirkistown for the Martin Donnelly Trophy race meeting. Unfortunately we were forced to give this a miss. Two days after my last event I went into hospital for a small scheduled day procedure but some complications required me to stay in hospital for a week and kept me out of action for over two months. I decided that it would be best to skip Kirkistown in order to try get back to full health and focus on our annual visit to Silverstone for the Walter Hayes Trophy in November.

With Silverstone being the last big event for Formula Fords during the year, it is always fiercely contested with no margin for error. This year’s event was no different but that is all part of the challenge. We were greeted with two days of dry testing which can be unusual for this event on the Thursday and Friday but that was all set to change for Qualifying on Saturday. Testing went ok but we were crippled with straight-line speed issues for most of Thursday. On Thursday night we discovered we had a bent valve in our engine and the team put in a late shift to have it all sorted for Friday. We were rewarded with a pretty  trouble free Friday, allowing me to set my best times yet around the Silverstone National Circuit.

Waking up on Saturday to the sound of heavy rain beating off the roof of our camper was far from ideal but like everyone else we just had to deal with it. The main aim of this event is to survive and make it to Sunday afternoon. I treated a very wet qualifying a bit too cautiously, meaning I would be starting in 17th for the afternoon’s heat. Sitting in the assembly area for the race, it appeared from there that the track was really starting to dry so we quickly made a call to adjust the setup of my car to allow for this. When I pulled out onto the grid at the other side of the circuit I knew we had made the wrong call as it was much wetter there. Nothing could be done now so I just had to cope as best as I could and most importantly survive the race to have a good crack at Sunday. I made a shocking start being on the wetter side of the grid but this was probably no harm as when I got to the first corner, the cars that had been around me on the grid were all spinning and crashing into each other. I managed to get through it unscathed and with the red flags coming out I was able to have another go at the start. A better start second time around put
me in the mix this time. I only made it half way round the first lap before my own mishap, spinning while
battling for positon. Our setup left me struggling for traction and I finished in a lonely 14th place but this was enough to qualify me through to the Last Chance race on Sunday morning, avoiding the earlier progression race.

Sunday and the final race

Conditions on Sunday were much closer to those in testing, giving me great confidence for the day ahead. The competition on Sunday really heats up with those desperate to make the Finals and that it often ends in tears. Similar to the previous day I arrived at the first corner in the race with cars going off everywhere and one spearing across the track towards me. I was forced to make a quick dive for the grass to avoid a big accident and from there I lost so much time I was unable to catch up the pack ahead and just had to bring the car home in one piece ready for the Pre-93 final later that day.
I lined up 16 th on the grid for the Pre-93 final on Sunday afternoon and it was a case of all or nothing in this one, the final race of the weekend. For the first time all weekend I got my elbows out off the start and a bit of luck finally went my way, avoiding a big crash at the second corner, I found myself having battled my way up to ninth at the end of the first lap. A few laps went past and I was holding my own in ninth and on the case of the cars in front. Going down into the second corner a few laps later my car wouldn’t go into third gear and for some reason I thought it would be a great idea to grab second gear which caused me to spin. In hindsight I shouldn’t have done that but in the heat of the moment I made a really wrong decision. With about 20 cars queued up behind me I had to just sit there in the middle of the track and pray they all avoided me. I’m still not sure how they all did but I got away with it and ended the race a lonely 21 st place. It was a disappointing end to a race that started so strong but it was fully my own fault
and a lesson was well and truly learnt!

Looking Back and ahead to 2018

It’s never a bad weekend when you wheel the car back into the truck with all four wheels on it and looking the same as it arrived. This will allow us to make some more upgrades over the winter ahead of next year instead of fixing damage. Once again Silverstone lived up to expectations of being one of the toughest Formula Ford race weekends I think there is. It was made very enjoyable by the addition of our Australian partners and friends coming over to compete alongside us. Not to mention the hospitality of the guys and girls at Souley Motorsport whom we shared a garage with. We now have four Walter Hayes Trophy events in the books and looking forward to many more in years to come.
As always I must finish by thanking everyone for their help and support in not only this event but over the course of the year. What 2018 holds for us we aren’t quite sure yet but, watch this space for news