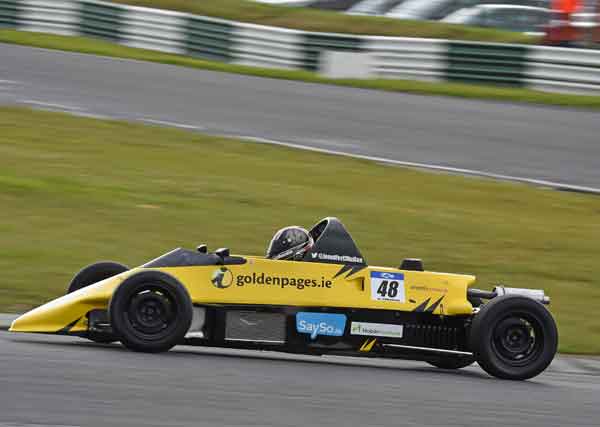 It seemed like an age since the Formula Ford Festival nine weeks ago but it was finally time to get going again last weekend in Mondello Park. Over the break I had a small operation on my knee so I guess it wasn’t so bad having such a gap to allow me to recover from that. Having really enjoyed my first outing in the car I was really looking forward getting back out for another crack at it.

With double points on the cards for rounds five and six of the Champion of Mondello Series, I hoped this would be my chance to claim the lead of the Pre-86 championship. I missed the first two rounds when double points were also on offer so I was a bit behind having only taken 20 points from my last outing.

Testing on Saturday didn’t quite go to plan, we were hoping to get in plenty of laps to continue to improve my confidence in the car and get my times down. A few small problems during the day ate into our running a little but these things happen, thankfully not very often to me and I knew that all the FCR Media Racing guys would have everything back 100% by the morning for race day.

My nerves feeling leading up to the event had worn off on Sunday morning and the goldenpages.ie car was once again sitting perfect in the garage waiting for me. I was really hoping I could do a good job for everyone who is working so hard for me. The weather reports all week leading up to the event had given for Sunday to be awful but it started to dry up as our qualifying session was approaching. It was a last minute decision when the session was declared wet to go on a dry set up but with my wet set of tyres on to try and match the conditions as best we could. There is no difference in Formula Ford tyres for wet and dry but basically you want as new of a set as possible if it’s going to be wet. I was keen to get a few good laps in early incase the rain arrived but when it didn’t I got faster and faster as the session went on. I set my best ever time in the car on the last lap despite making a mistake and loosing half a second. I still qualified at the back but was pretty pleased as I knew I only needed to finish both races to take the lead of the championship with the other person in my class not showing up again. A race is a race though so I also had my sights on finishing as high up the order as possible.

I made my worst start in years in race one, I don’t know what happened but I looked down at my revs, looked up and for some reason thought the lights had gone out but they didn’t so I had to stop and then go again when they did. I knew I wouldn’t have the pace to keep up with the front runners but as I said earlier I just needed to finish but also wanted to try and improve my lap times further. A couple of laps into the race, a spring broke on the choke making it difficult to drive. These things can happen but I brought the car home for the class win and those important points I was after in eighth place.

A massive downpour about an hour before the second race soaked the track. Our race an hour later was declared wet and with the track still partly wet and the sky black we gambled on a full wet set up this time. The start in this race was also not one of my finest as the car in front of me jumped the start by a huge margin and distracted me from my own start. I was praying after just one lap that the sky would open and pour rain but it didn’t happen. I struggled on the dry track on the wet set up but I was happy with the decision as I would have struggled a lot more if the rain had come and I was on a dry set up. Once again I crossed the line to take another class win and the lead of the championship.

It was a bit of an up and down weekend but there is plenty of positives to take from it for sure. The next event up for me is the prestigious Leinster Trophy race meeting on 20/21st September on the International track layout at Mondello Park. I look forward to getting back in the car and continuing to improve and to fly the flag for my sponsors goldenpages.ie, mobileready.ie and Sayso.ie