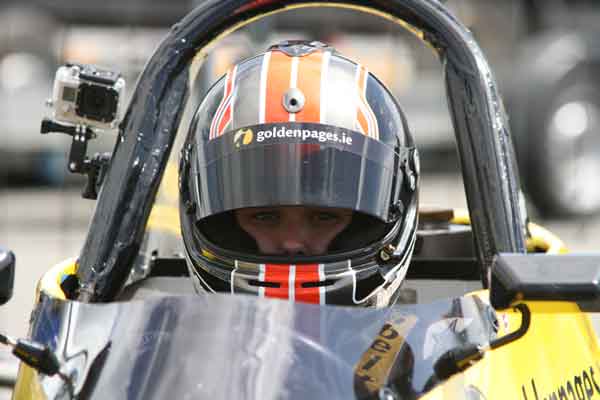 It’s been some time but I’m delighted to be back in action. Other than taking part in a Rallycross event and getting the amazing opportunity to test a Ginetta G55 around Silverstone in the latter part of last year, I haven’t been in the driving seat since the last time I reported on the Leinster Trophy event in September.

The decision was made around Christmas that I would make the switch to Formula Ford for this year after looking at a few different options. But as is the story for many racing drivers, it was all down to budget. The racing calendar started much earlier this year in March as opposed to the normal April date and we unfortunately missed out on putting something together in time for the first event. Very soon after though, we confirmed a deal with returning sponsor goldenpages.ie to contest the remainder of the Champion of Mondello series along with one Kirkistown event. My 2013 team FCR Media Racing joined forces with Formula Ford expert Bernard Dolan to form a top class team and we set about getting a car for me to race at the next event in June.

A 1985 Reynard was the car of choice and work began getting it ready for the all new for 2014, Irish Formula Ford Festival. There were two pre-event test days on the Wednesday and Friday before the event so on the Tuesday evening I headed over to the team to have a seat poured for me. One of the most important things when racing is that you are comfortable in the car and after a few hours and several cups of tea we were good to go for testing the next morning.

When we arrived to Mondello Park it had been raining so we decided it would be best not to go out for my first run in the wet conditions so instead we got everything set up and waited for it to dry up. The two-day event was being run with Saturdays Champion of Mondello races on the National circuit layout and Sunday’s Vivian Daly Trophy event on the longer International track. The test days were split into two parts to allow drivers to get to grips with both track layouts. It dried up just in time for one quick run on the National track before lunch before switching to the International for the afternoon on the Wednesday. We ended the day pretty happy with what we had achieved. Friday was much the same, every time I got into the car I got quicker which was all we were really aiming for ahead of the weekend.

Qualifying and two races was the schedule for Saturday. There were only two drivers entered for the pre 87 class and when the other guy didn’t arrive I only needed to finish to score maximum championship points. I qualified 12th for both races but struggled to get near the lap times I had done in testing the previous day. Race one was going ok until it was red flagged and I didn’t get such a good re start and spun on the opening lap. I managed to finish the race still somewhat off my best time but that was more than could be said for race two. Forgetting that Saturday was all about scoring points, in race two I was getting closer to setting a new personal best lap time but on the last lap I was pushing hard as I could see on my lap timer I was on for my best time yet when going down into turn three I hit the wrong gear and fired myself off backwards into the gravel and my race was over. Very silly mistake on my part but I certainly learnt from it so I suppose that’s the positive to take from it.

Sunday was all about eyes on the prize as there were no points to be scored but there was however prize money. Once again the other driver in my class didn’t arrive so I just needed to finish the two heats and the final to earn some cash but I learnt in race two the previous day how easy that can go wrong and I was certain that wasn’t going to happen again. The grid for heat one was pulled out of a hat at random with heat two being a reverse of that. I started race one 10th but with a lot of the front running drivers starting behind me I ended up 13th at the finish. Race two was similar, I started seventh and crossed the line 10th meaning I would start 11th for the main event. The final was a 20-minute race as opposed to the normal 15 minutes. I struggled quite a bit at the start of the race and fell back a bit from the pack. After a few laps I started to get into a rhythm and managed to go 1.5 seconds quicker than I’d gone all weekend but it was too late to make up any places, but I didn’t need to as I had already got the class win and €300 in the bank for finishing so I made sure to back off on the last lap to be certain I didn’t repeat my heroics from Saturday.

All in all I think we had a good weekend, there was a lot to be learnt in a short space of time but the main thing was I enjoyed myself and I am much more confident in the car now and ready to come back fighting at the next event in August. I owe a massive thanks to all the guys on the team, FCR Media Racing who ran my car faultlessly all weekend, Kevin Gillespie and Paul Grogan for working miracles to get my car wrapped yellow and sign written on Friday and of course my sponsors goldenpages.ie, mobileready.ie and Sayso.ie for making the whole thing possible.

Before my next visit to the track I am off to England on Friday to represent the wheelsforwomen.ie girls in the Continental Tyres Media Cup soccer event with a team of Irish female journalists so hopefully we will bring home some silverware!