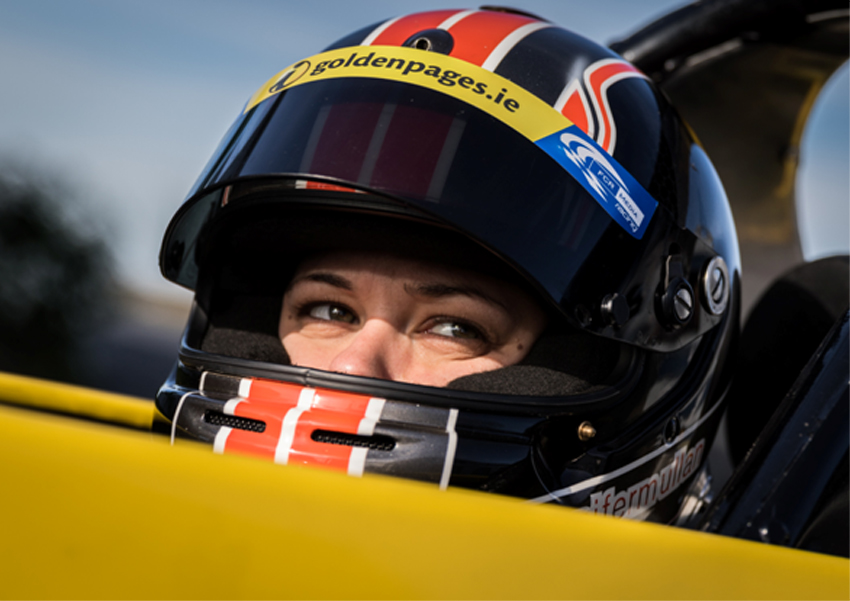 That three month break in the All Ireland Formula Ford calendar was just the longest break ever! However, we’re back now and it’s all pretty full on for the rest of the season. Since I was last in my goldengages.ie Reynard things have been pretty quiet. I was lucky enough to make an appearance in the Baker Automotive Irish Stryker Championship back in June but other than that I didn’t sit in a race car until a brief test at Mondello Park just two weeks ago. I just spent the time trying to keep fit, which It would appear I failed horribly at based on how wrecked I was when rounds seven and eight of the Formula Ford Championship took place on Mondello Park’s National Circuit at the weekend. Last weekend I also attended a refresher course with mind coach Linda Keen. I worked with Linda a few years ago and it really paid off. This time was no different, if you haven’t got your mind focused on the game you’re really wasting your time even getting in the race car, well at least I find that’s the case for me.

So with my refreshed mind set it was off to Mondello Park to continue my Pre-87 championship challenge. I am currently leading the All Ireland Pre-87 class with two wins and two third place finishes so I was keen to extend that lead. With the boss, Bernard Dolan off on duty with KCMG in Kuala Lumpur it was the super quick Kevin O’Hara who drew the short straw and was drafted in to be my driver coach for the weekend. Together with him and the rest of the team we made massive progress in testing on Saturday taking no less than 1.2 seconds off my previous best personal best lap time around Mondello in the Formula Ford. To put that in perspective I was now only 1.7 seconds off the top guy’s times in a 21 year old car, not too shabby really. It was also great to have fellow wheelsforwomen.ie member Laura Keane come visit me for a quick chat and a cuppa during the day!

It was then back home to get the BBQ on to cook dinner for the team who were all coming over. In true Irish style it had started raining but we didn’t let that stop us, and soldiered on with some goldenpages.ie umbrellas. Thankfully everyone showed up at the track the next day so I think I avoided poisoning anyone!

We all know that testing counts for nothing if you can’t repeat your performance on race day. I know this all too well and I was hopeful that this wasn’t going to happen this weekend! When I left the house on Sunday morning it was raining, this was my worst nightmare. When I got to the track I set off on a mission to get new tyres fitted to rims that I had been saving for this very eventuality. The very kind Alan Kessie from ASK racing helped me out with this but thankfully I didn’t need them as it dried up just in time for our qualifying. Getting in the car Kevin told me if I matched my best time from yesterday he’d buy me a cup of tea, this seemed like a pretty good incentive! I managed to get to within four tenths of a second of my best testing time putting myself seventh on the grid for both of the day’s races, but more importantly I was the lead Pre-87 car. Unfortunately I had to make my own tea though!

Both races were pretty routine; I didn’t get such a good start in race one due to getting too much wheel spin off the line. I still managed to hold onto my starting position rounding the first corner. I held onto the back of the lead train for the first lap or two before making my way into sixth with a move up the inside under braking into the last corner. While defending hard over the course of the next few laps I lost touch with the others. After a few laps of hugging the inside of the track defending like my life depended on it, the guy I was battling with spun out allowing me to cruise it home to the finish to take the Pre-87 class win. Race two was a pretty lonely affair until the last few laps, where I made a small mistake early on and let the guys in front of me get away. In the last few laps I managed to reel in sixth place and just lost out in a drag race to the line by 0.1 of a second! It was disappointing but I still achieved the necessary Pre-87 class win again.

Overall it was an extremely positive weekend. I showed pace that I never thought would be possible and I brought the car home in one piece with its shiny new nose cone intact. I also secured some good points in the overall All Ireland Formula Ford Championship along with extending my lead in the class championship.

None of this would have been possible without the huge effort put in this weekend from FCR Media Racing guys, who as usual played a blinder. With their help and of course my sponsors goldenpages.ie, www.SayHiWifi.ie & Snap Sync., my season is well and truly going from strength to strength.

Thankfully there are no more long breaks in the calendar and I have only a couple of weeks before its time to head north to Kirkistown for the next rounds of the championship on August 29th.