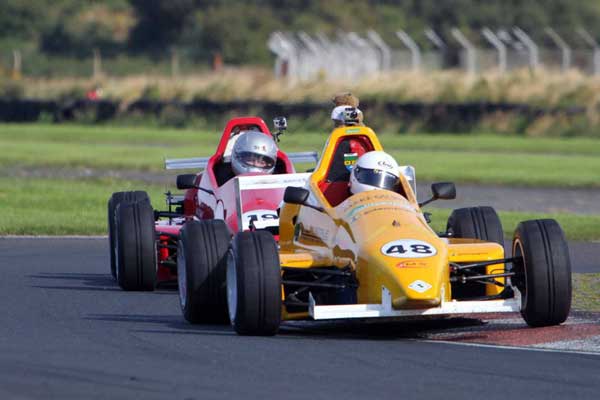 Less than a week after the Phoenix Park Motor Races it was off to Ireland’s fastest  race track, Kirkistown Co.Down. It would be my first time to compete at this circuit since 2009 and my first time in a Formula Sheane here. With racing only taking place in Kirkistown on a Saturday, testing then has to take place on the Friday.

I flew in to Belfast late on Thursday night after being in England for the day with work and headed to a friend’s holiday home just 10 minutes from the track to get some much needed sleep. When my alarm went off on Friday morning all I could hear was rain beating down off the roof. I was now dreading the day ahead as I had never driven on a wet race track before. By the time testing was due to start the rain had cleared and the track started to dry quickly and the sun stayed out for the entire day. In the early part of testing I was struggling to make much improvement to my times so current Formula Sheane Champion Kevin Sheane and myself sat down and went through the footage from my on board camera that I had got during the morning. With some great advice I made a lot of progress towards the end of the day, setting me up well for qualifying on Saturday morning.

The rain greeted us once again on Saturday morning but this time it wasn’t as quick to stop. Formula Sheane were the third on the timetable to qualify and by the time this came around the rain had eased a little but the track was still very wet. We made the decision to bolt on a new set of tyres that we had been saving for this very occasion. As the session went on the track started to dry very quickly and lap times were tumbling. I managed to set a quick enough time to put myself in 9th position for both of the afternoons races from 13 cars, a seasons best performance for me. 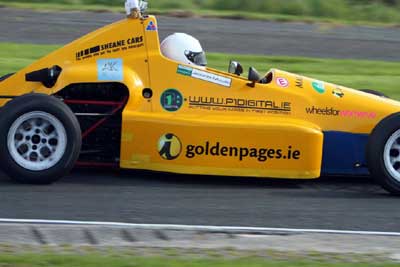 Race 1 for us was third up after the lunch break, I was really hoping for a strong performance in my goldenpages.ie Formula Sheane after such a good qualifying but I was also quite nervous as I don’t normally have as many other cars behind me on the grid so I had to think about defending from them as well as attacking the guys in front of me off the line.  I got a great start and managed to go around the outside of the car in front of me on the grid approaching the first corner. By the middle of the race I was running in 7th position and my lap times were improving massively even though I had to defend pretty hard from Mick Sammon in 8th place. Unfortunately I managed to lock up my brakes going in to Fishermans corner causing me to run off on to the grass and spin, dropping me to 10th place. I managed to work my way back to 9th where I finished the race. For Race 2, the Motorsport.ie bear, Tadgh, come along with me for a spin and starting in 9th position again, I was hopeful of another great start and it turned out not too bad but I lifted off the power a little going through the very fast left hand bend, Debtors and this caused me to loose a few places. However there was a coming together at Colonial corner and I managed to sneak through unscathed and found myself heading down to Fishermans in 4th position with a small gap back to Aidan Byrne behind me. I couldn’t believe I had made up so many places but I was convinced the red flag was going to come out and stop the race, putting me back to my original starting position but it never came. All bar one driver managed to continue and they set after making up the ground they had lost. I held onto fourth place for a lap before Aidan Byrne got down the inside of me at the hairpin and we were side by side all the way through the fast left hand bend and down to Colonial. I was forced to give up the position there but concentrated on keeping with him and trying to get the place back. Unfortunately after a few laps I couldn’t hold off the front runners who had been caught up in the first corner incident any more and I dropped a few spots. A lap or so later just before the safety car came out for debris on the track I lost all feeling in in my brake pedal , something which is a little scary on such a fast circuit. I tried making adjustments with the brake bias adjuster in the car but to no avail so I was forced to pit. Once in the pits it was quickly discovered by my team that I had a burst brake line and I was forced to retire from the race. 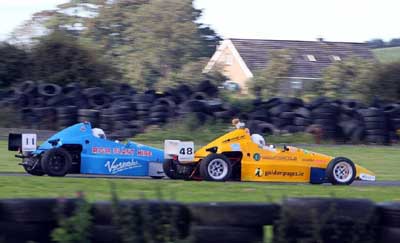 Leaving a very eventful weekend behind I come away feeling very positive that fantastic progress was made as was hoped for this year. I’m really looking forward to the next event in Mondello Park on 15/16 September where Formula Sheane and I will be racing for the prestigious Leinster Trophy previously won by world class drivers such as Ayrton Senna back in the seventies!

Once again I cannot thank my sponsors enough who are key to keeping me on track in 2012. They are  my sponsors goldenpages.ie, P1Digital.ie, Amandakevlin.com, motorsport.ie, wheelsforwomen.ie and Sheane Cars.

Till then, thanks for reading!