We follow Jennifer’s progress as she prepares for Rounds 4 & 5 of the Formula Sheane Championship.

After a 6 week break in the Formula Sheane Championship I returned to Mondello Park with my goldenpages.ie backed Formula Sheane for the next two rounds of the Championship. My newly designed livery was now sporting the wheelsforwomen.ie logo. The atmosphere in the class was very up beat with the news that our class would be racing for the most sought after prize in Irish motorsport in September, the Leinster Trophy coming through last week.

With this weekend being the Formula Vee festival, it was held as a two-day event. Formula Sheane were only scheduled to compete on the Sunday but there was a half day test session held on the Saturday morning for all classes so this gave me a chance to take to the track to try and build on the progress I made at the previous race meeting back in June. Luckily we got the chance to do this as I ended up having a small problem with a broken CV joint but with the hard work of my team Sheane Cars, they had the part changed and I made it back out on track without loosing any valuable track time. When these things happen it’s always a relief when it’s on a test day. I didn’t make as much progress as I had hoped for during the rest of the morning but I put it all behind me and looked towards qualifying the next morning.

On Saturday evening the Formula Vee association held a barbeque and a charity auction in aid of Barretstown. The bids were flying at the auction and I was lucky enough to be the highest bidder on an entry fee for Kirkistown where the next two rounds of our championship will be held. After that was all over it was straight home for an early night to be bright eyed for Sunday.

The sky was very grey on Sunday morning as we all stood out in the pit lane looking up at the sky wondering was it going to rain before our session or not. Some drivers were praying for it to rain, me however was hoping it didn’t. Luckily it didn’t rain and we headed out on a dry track although it was quite windy. I managed to post my best ever qualifying time but unfortunately I didn’t manage to set a new personal best time as hoped. I was confident I could only improve in the race so I tried to keep positive. 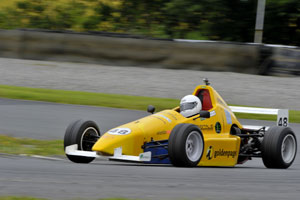 I lined up 14th on the grid for Race One.  (See Race One on YouTube here )
I managed to work my way up to 10th place after a few laps but unfortunately I spun coming out of Dunlop corner and lost around 20 seconds. It was a pretty lonely remainder of the race as a result so I decided to get my head down and try and improve my lap times and hope that a Safety Car may come out at some stage in the race and I may be given a second chance to battle with the others again.

Unfortunately there was no requirement for the Safety car but I did manage to set a new personal best lap time, half a second faster than my previous best which had me full of confidence for race 2 as I was slowly but surely closing the gap to the others.

Race two was the final race on the program for the weekend and with a long wait from race 1 we were all raring to go. We headed out on our warm up lap and once again I was starting 14th on the grid. I didn’t get a great start and was trailing the field into the first corner. I could see a bit of dust being kicked up ahead of me which was from two cars going off into the gravel on the outside of the corner. I decided I would stick to the inside and hopefully avoid any of the chaos unfolding out there. Unfortunately it wasn’t to be as the incident carried on round the turn and the knock on effect of a few cars coming together meant that I ended up with no where to go when another car came across in front of me while he was trying to avoid one of the spinning cars and we all ended up making contact with one another. The race was red flagged and the incident had claimed 7 victims. My car had very little damage but the steering was no longer working so my race was all over. (See the collision on YouTube here ) .

The Mondello Park Track Team cleared my car into the infield along with the others so that the race could be re-started for the remaining cars. I walked back into the paddock with the instructions from the medics at the incident to make a visit to the Medical Centre to have my wrist checked out as I had hurt it when I didn’t get chance to let go of the steering wheel before the incident. The Doctor referred me for an x-ray but thankfully there were no broken bones and I am able to write this diary entry for you all.

Overall I am quite positive after the weekend despite the incident as these things happen. My car will get the once over down in the Sheane Cars factory before heading to the next race which will hopefully be the non championship Pheonix Park races on 18/19 August.

I would like to thank all the people who continue to support me and I hope we will have some strong results to write about very soon!