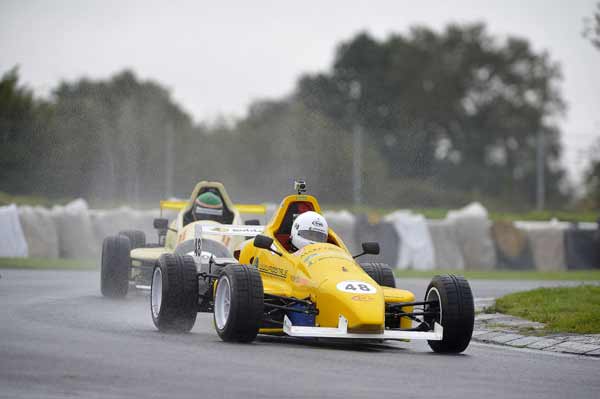 Three weeks seemed to drag by since my last race at Kirkistown and when I arrived at Mondello Park on the Friday morning to test for the Leinster Trophy race meeting I was really looking forward to getting back in the car again. I quickly got signed on, jumped in the car and headed out of the pit lane for the first session. I was using the first session to check the brakes were working properly again after I had to retire in Kirkistown when they stopped working.

The day quickly got quite busy because we were using the International track layout which is almost double the length of the normal national track we have previously race on. This meant that more cars could be let out on track at one time so we had a session every 20 mins. After a few small technical issues with my car’s ecu going in to what’s called safe mode every time I went out. My team quickly traced the issue to a loose wire and fixed the problem and the rest of the day I just got my head down and tried to get to grips with the track. Come mid afternoon I was really starting to feel the physical effects of such a long technical lap and my arms were really starting to tire. I decided I had done enough for the day as I didn’t want to go into Saturday feeling tired. We got my goldenpages.ie Formula Sheane prepared for the big weekend ahead and locked up the garage and headed for home.

Saturday would just be a normal championship round for us so we set out to qualify just after 11. The session was fairly uneventful and each lap seen my lap time improve. When the chequered flag came out I was showing in 17th position so this is where I would start on the grid for the afternoon’s race. There was quite a wait before it was time to head to paddock assembly and get ready for the race as we weren’t scheduled to be on track until 16.10. With lining up on the grid in 17th I knew I had quite a bit of work to do to move up the field but I was also conscious that tomorrow’s race for the Leinster Trophy was the big one so I didn’t want to get caught up in any trouble in this race. The lights went out and I didn’t get a bad start until I missed third gear and Aidan Byrne got passed me and I dropped to 18th place. I decided then to just try and put in fast qualifying laps and try to improve my times for the next day. I crossed the line in a lonely 15th place but confident that progress was made to improve for the Leinster Trophy race. Once again on Saturday evening my team stripped my goldenpages.ie Formula Sheane down and cleaned it all so it was looking first class for Sunday as there was to be television coverage. 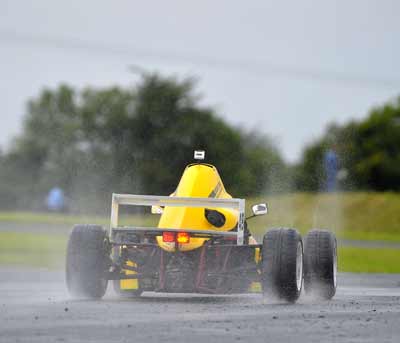 I had heard rumours that Sunday could possibly be wet and I think I was one of the few who was actually hoping it would be. When I opened the blinds on Sunday morning I wasn’t disappointed. It was lashing rain with no signs of it clearing up anytime soon. I headed over to Mondello Park with a smile on my face as I was hoping that with it being wet I would stand more chance of mixing it with the rest of the pack as the cars are less physical to drive in the wet and I went quite well on a slightly wet track in Kirkistown previously. When we took to the track for the big Leinster Tropy qualifying I was almost sorry for what I had wished for. It was so wet and the spray was coming up off the front wheels straight onto me. It was so slippy it was like driving on ice but strangely enough I was actually having fun and was confident I could put a pretty good lap together. The rain kept falling for the first part of the session and going under the bridge on the main straight you would lose sight of the rear red light on the car in front and you would be pretty much blind for a split second until the 150m board appeared on my left hand side and it was time to get on the brakes. It really was a case of tip toeing around to make sure you had enough laps under your belt to qualify for the race, I managed to do this all be it with a spin on pretty much every lap. During the second half of the session the rain eased and the track started to dry a small bit and my times began to tumble. I started to fall down the order a little having been as high as 12th place at one point. I decided it was time to try and set a quick lap and I was talking myself through the lap one corner at a time and I made it all the way to turn 7a and 7b two thirds into the lap before losing the car again when I got on the power and spinning. My car wouldn’t restart this time and I was stuck in the middle of the track and the red flag came out stopping the session. Sure enough as the red flag came out my car re-started and I made my way back to the pit lane, there was only a minute left on the clock so the officials called an end to qualifying and I was 18th on the grid for the race. I was very disappointed with this as it was clear I had the pace to be further up the grid, it just proved very difficult to get a full lap together in these conditions.

I decided not to dwell on qualifying too much as it was pretty fun driving in those conditions even though I didn’t get the result I had hoped for. As said previously there was television coverage for Formula Sheane and just as I was drying off my wheelsforwomen.ie supported car, Leo Nulty and Frame IT productions arrived down to my garage to do an interview with me for the program.

Being a girl I had to plead with them to come back in five minutes when I had changed into my clean race suit and brushed my hair. The guys arrived back a few moments later and despite all the interview experience I got before and during the Bavaria City racing event in June I was still really nervous, but as usual it wasn’t as bad as I thought and it went pretty well. Following this I was asked would I be in the pitlane at lunch time in my car to go out with Kevin Sheane and Brian Hearty behind a road car with a camera man in the back to get some shots of us going around. It was still very wet when it came around to doing this and even at really slow speeds it showed just how difficult it was to keep the car in a straight line as coming out of turn 4 I looked in my mirror and Kevin Sheane had managed to spin off on to the grass, this lead to great amusement afterwards! 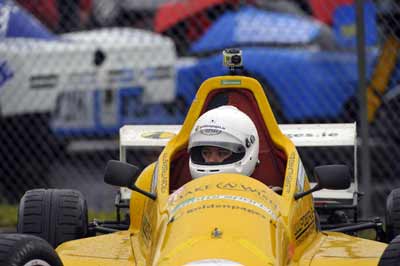 The rain continued to fall throughout the day which had me pretty excited for the race until about an hour before we were due to head to paddock assembly the rain stopped and with the wind was drying the track very quickly. Before climbing into my car I checked the live timing on my phone to see what times the Strykers on track were doing to try and judge what the conditions were like out on the back of the circuit where we couldn’t see. The times were within a second or two of the previous day’s dry times so I knew by the time we got out it would be a dry track. Sitting in paddock assembly it started to spit rain again and my hopes were raised for a wet race but unfortunately nothing came of it and the Leinster Motor Club course car arrived at assembly to lead us out to the gird to do some tv footage before we were let off on our warm up lap. We didn’t head out the normal way, out of the pitlane, we were let out a side gate and formed on the grid. The starter held up the stop engines board and the TV crew took to the grid to interview the drivers of the first few cars. Once that was done we were set off on our warm up lap and came back around to line up for the start. The lights went out and as I took off the line the car of Eoin Crowley in front of me didn’t move taking away any advantage I had just got from a good start as I had to lift off the power for a split second and try to go around him without collecting any of the cars starting behind me. This cost me a few spots but again I just got my head down and tried not to let the pack get away from me. I was being put under a great deal of pressure from behind by Gilbert Clancy, a few times he managed to get up alongside me on the straights but I managed to keep him behind me under braking into the corners. At the end of the race I had opened up a gap and was quite comfortably able to make sure that I brought the car home and not spin off under pressure like what happened in Kirkistown. I crossed the line in 12th place after starting 18th which I was delighted with. Kevin Sheane won the race and taking with it the prestigious Leinster Trophy, won in the past by people such as the late Ayrton Senna.

The last race of the year takes place on 6th October in Kirkistown but unfortunately it’s not looking likely that I will be competing at this round due to budget restraints but I would like to thank my sponsors goldenpages.ie, P1Digital.ie, AmandaKevlin.com, motorsport.ie and wheelsforwomen.ie for all their support this season, without you none of this would have been possible.

(All photos by Michael Chester)