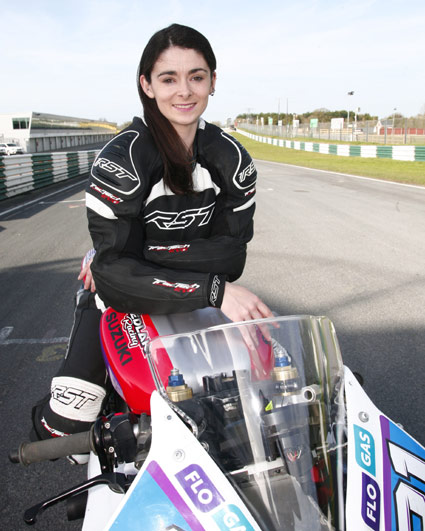 Nicole Lynch joins us as a regular contributor with her own column, ‘Life on two wheels’ –  we follow her progress through 2017

This is my first blog for Wheels for Women and I couldn’t be happier to be joining their team and many thanks for the opportunity.

I come from a motorbike racing family, I’ve been riding bikes since I was four years old and holding spanners for just as long. As well as racing bikes, I also love working on them and that’s very important to me.

My Suzuki SV650 is a commuter bike with upgrades and I race it in the Supertwins class, which means it has a tuned engine and a few upgraded components such like the forks and the brakes. My bike can reach speeds of up to 131mph/210 kph around the track, and no, I don’t find it scary, which is a question I get asked a lot. The only time you are sitting on the bike properly is in a straight line. Around the corners, you’re mostly hanging your weight off the side to help the bike turn better. I’ve had several top 10 finishes at Thundersport GB so far, my best to date has been 7th place at Snetterton racing circuit on the weekend of 30th April, which brings me closer to my goal of a top five finish this year.

Racing motorbikes is a lot more physical than most people realise. I am not naturally as strong as some of the guys who can wrestle their bikes around much easier but this was never going to stop me, it just means that I train a little bit harder, and I enjoy that too.  When preparing for racing, I don’t go to a gym. Instead, I do a lot of bouldering (indoor rock climbing without ropes), cycling, running, mountain biking and personal training. I also take part in obstacle course racing, which is for example, a 10km running race including obstacles such as muck, monkey bars, climbing ropes etc.

This started off as training for bike racing, but I have actually managed to qualify for the European and World Championships. I’m hoping to go to the Europeans, as the Worlds are in Canada, which is slightly out of the budget!  I’ll be updating this blog monthly with race reports, and general snippets of how everything is going. You can also follow me on Twitter ,  Instagram or facebook