The Lure of the Red Carpet

Home » Features » The Lure of the Red Carpet 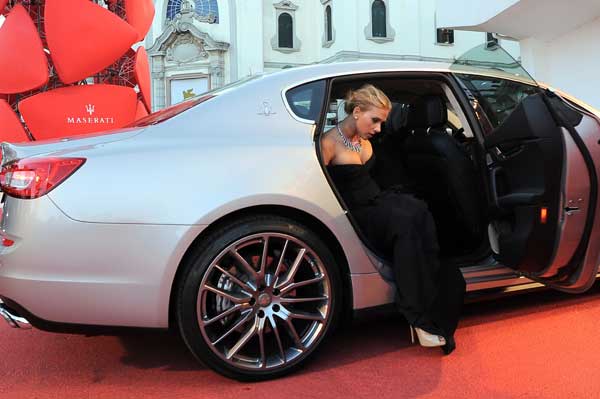 From super models to super stars no big premiere entrance is complete without the obligatory super car. We discover why carmakers cannot resist the lure of the red carpet.

The launch of Sky Living’s new entertainment series “The Face” in September was a glamourous affair – the red carpets were rolled out, camera flashes popped and the show’s three stunning supermodel presenters did the obligatory pouting and posing for the camera.

There were flash cars too – big lumps of lovely Italian Maserati metal. The three presenters arrived separately in a Maserati each (of course) – Caroline Winberg in a Maserati GranTurismo Sport, Erin O’Connor in a Maserati GranCabrio MC and Naomi Campbell in the Maserati Quattroporte four-door saloon.

We don’t know if the ladies travelled separately to avoid any catfights between the show’s presenters on the way to the event. But it was a good way of showcasing three fine examples of Maserati cars in a glamourous setting, in front of a crowd of photographers chomping at the bit to take photos of the ladies getting out of their luxury chariots.

Of course luxury cars and fine women in the fashion or film industry like Caroline, Naomi and Erin go together like a good gin and tonic. It is the perfect combination of beauty, power, and affluence.

In truth the world of fashion and A-list celebrity is too much of a carrot for most carmakers to resist and that is why they are falling over themselves to snap up an A-list brand ambassador or make an entrance at a swanky launch event. We’ve seen this where the likes of Audi, Land Rover and Porsche have teamed up with massive stars like Gwyneth Paltrow, Victorian Beckham and Maria Sharapova to launch cars and represent these brands. It’s very good PR.

“The Face”, a show which tries to find the model who has what it takes to represent make-up giant Max Factor through a series of challenges, has a largely well-defined audience. For women who may not make it their business to read the motoring in their daily news regime (or those who don’t follow the news at all!), carmakers have a powerful medium in TV to get their message across about their brand in a favourable light.

When Sienna Miller showed up at the BMW i3 launch a few months back naturally the showbiz and fashion press was interested. The motoring hacks gushed about the first electric car from the luxury brand, while the rest of the media interest centred on dissecting Ms Miller’s outfit.

In a coup for Maserati, the Quattroporte had a whole episode of “The Face” dedicated to it. It starred in this week’s episode where contestants had to produce the best online commercial for the new Quattroporte. It’s a good piece of product placement by Maserati and it adds a feminine touch to the brand.

With the promise of glamour, celebrity and media interest, it’s no wonder that carmakers cannot resist the red carpet. It’s a case of lights, camera, and action – even before Naomi Campbell arrives.